Actual odds of winning one in three hundred and eighty million.

Following the May completion of the January slipcover project, I resolved to work on fewer projects at a time. That way, we’d see more projects done more quickly. Concept! We’ll see how that goes.

One of the outstanding projects right now is tiling the kitchen backsplash. After installing the countertops, I repaired the walls damaged by removing the old counters, and did some tile research. The Kev and I looked at many patterns, and one we both liked alternated tile widths: 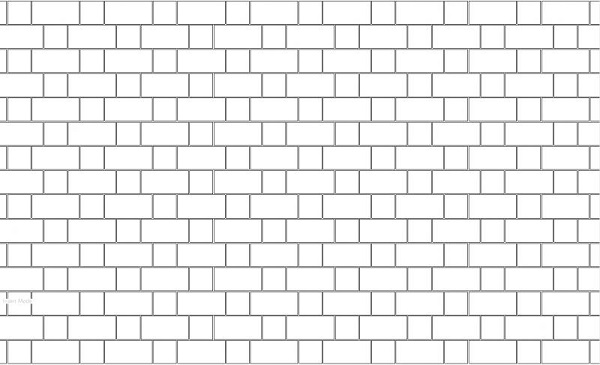 We intend to use white ceramic tile one way or another, and there weren’t stock sizes that would do this pattern. When I mentioned to Kevin that we’d have to cut every other tile, he said, “Forget that!” (or words to that effect). That leaves us with three finalists that involve stock tile sizes to choose from.

This is such a classic look. 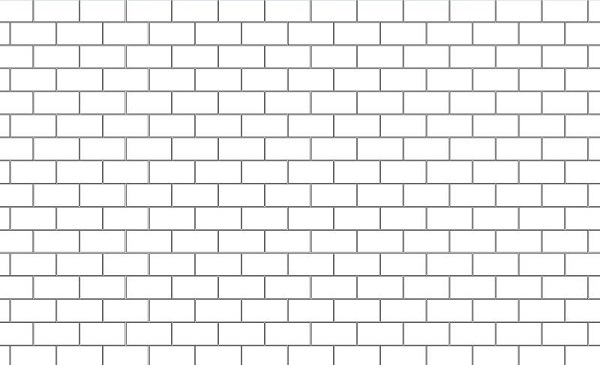 Subway tiles in a staggered brick pattern (also from Tilejax)

It’s a popular choice for good reason–take a look at how plain white tiles can be varied just by grout color. 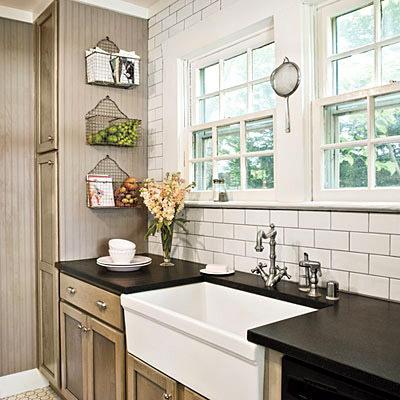 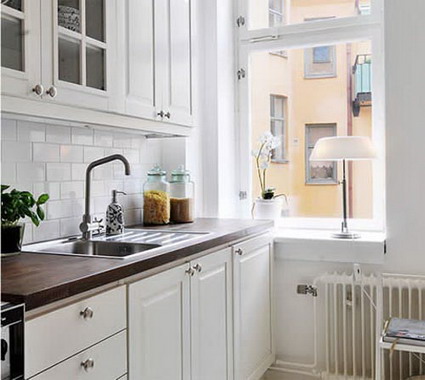 This would be consistent with the age of the house and lend a tailored feel to the room. My only misgiving here is that the horizontal orientation of the pattern might make the small room feel a little…shorter? Although I’m short myself, and I have been known to wear stripes.

While rectangular subway tiles are very traditional, plain-Jane 4×4 tiles were actually the most commonly used tile in the 1920s, when our house dates from, as well as for the entire 20th century. 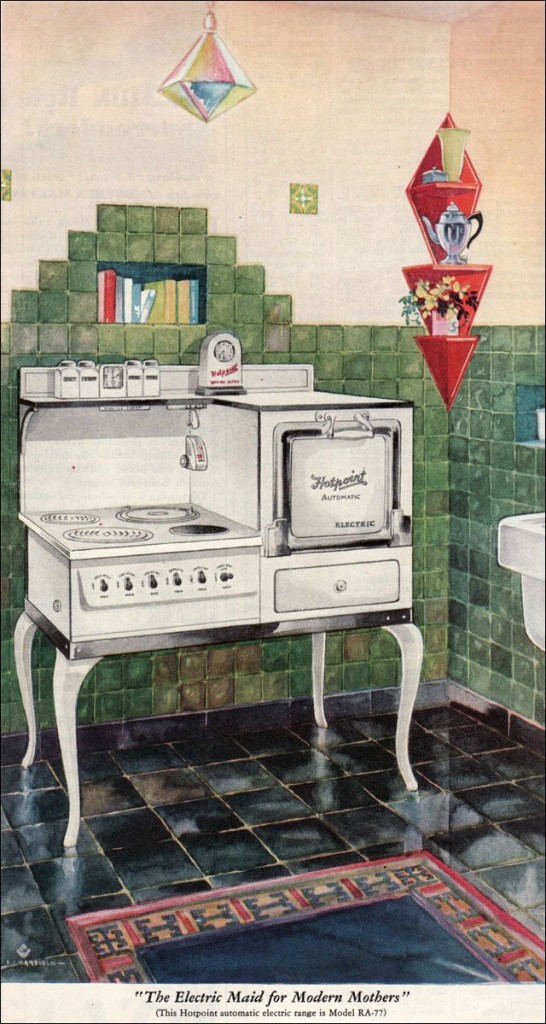 So many levels of fun here. Check out the light fixture!

Square 4×4 tiles are sometimes called dated (by fancypants people), but to which date? The picture above is 1920s, and the next one is from the 1950s. 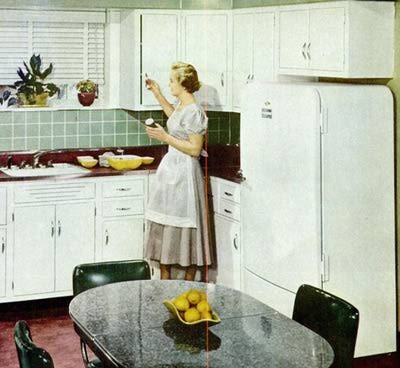 Wow, she looks so happy!!! The fifties were awesome, y’all!

Just to mix things up a bit, we considered using 4×4 tiles, but in an offset (“running bond”) pattern, a la subway tiles. 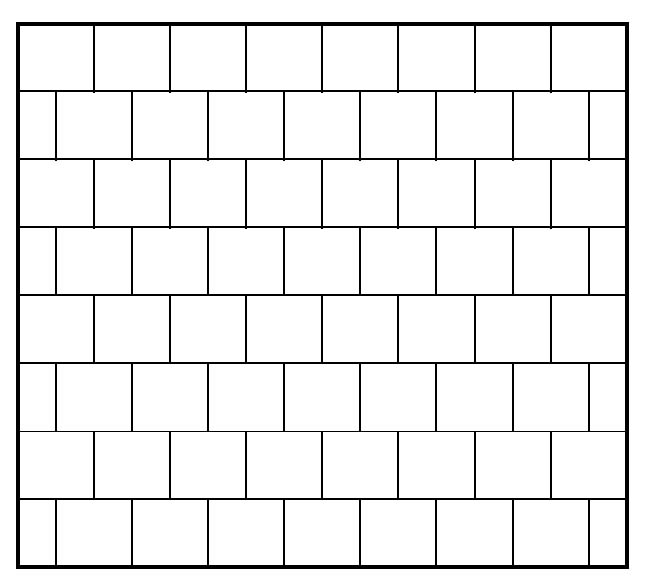 I don’t care for the bare-bulb boobs in the next picture, but I do like the vintage look of the tile with the darker grout. 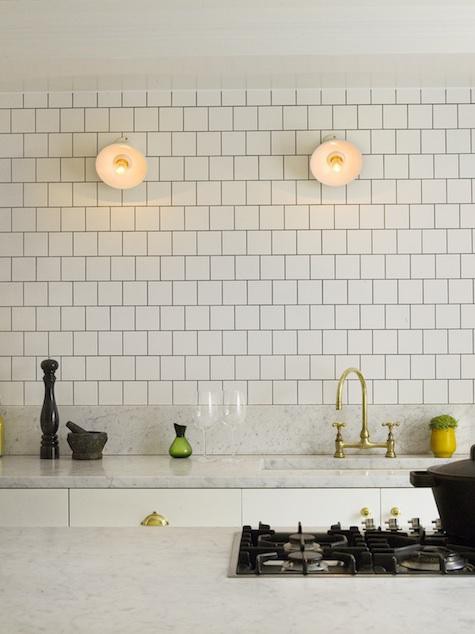 Seriously, those lights! Try to ignore them (via).

I like this next industrial-styled kitchen, BUT I JUST NOTICED IT HAS SIMILAR BARE BULB LIGHTS. How are those a good idea so near eye level? 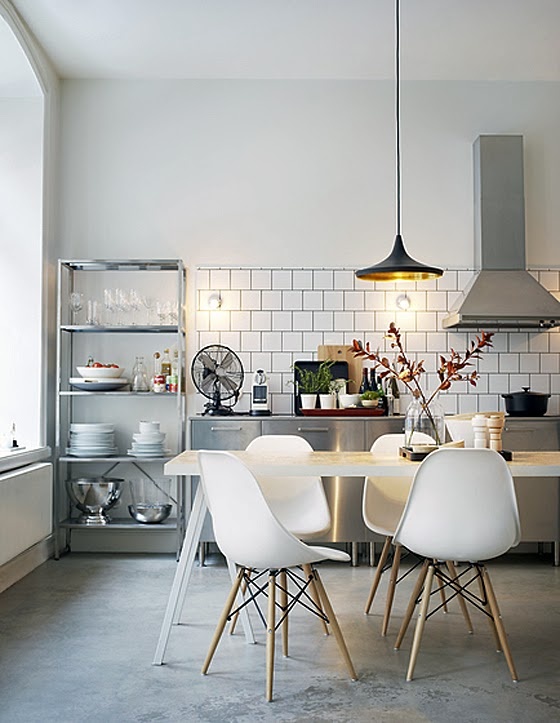 I like this look, but we’d skip the headlights. I guess I’m not design-savvy enough to understand the appeal!

Usually, when you see herringbone tile, it’s in a chevron pattern. 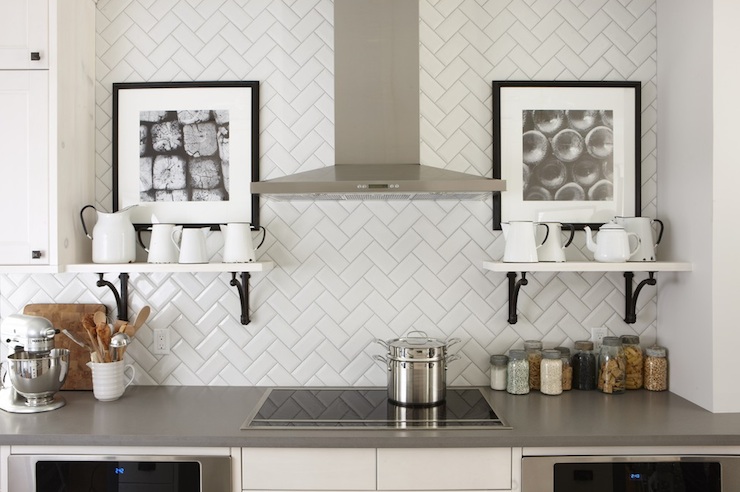 But herringbone can also be “straight”: 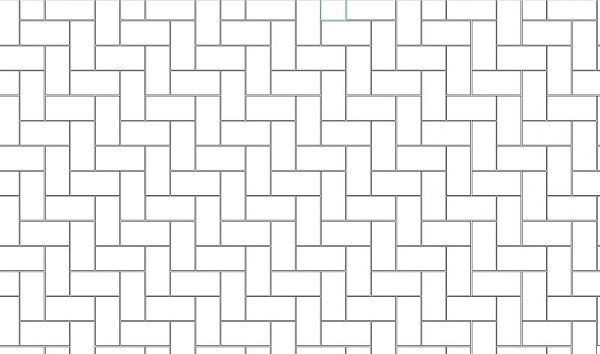 This version would involve less cutting than the angled version, and we liked the perpendicular look. And it’s a little different, but no more expensive in terms of tile count. 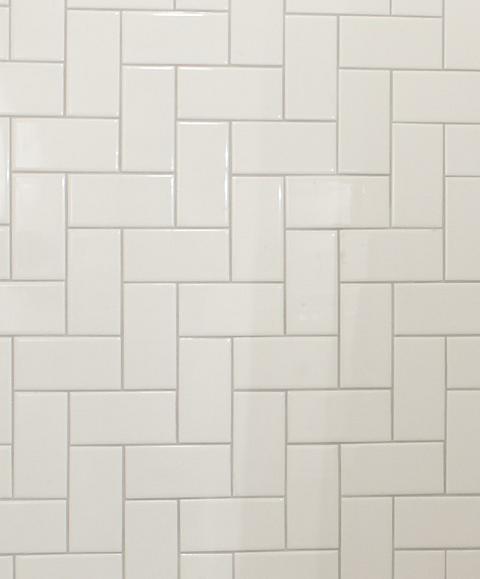 It also reminds us of the modified hopscotch pattern we ruled out earlier in the process, but without as much visual activity (and there would be much less tile cutting).

AND THE ENVELOPE, PLEASE…

We chose running bond 4x4s (without the lights). 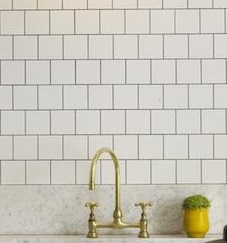 The examples here both appear to have grey grout. We’re leaning toward more of a brown tone for the grout since we have stained wood cabinets and I’d like to pull everything together. Maria Killam (check out her wonderful color and design blog) used a mocha grout for her sister’s backsplash, and it looks great with the other brown tones in the room. 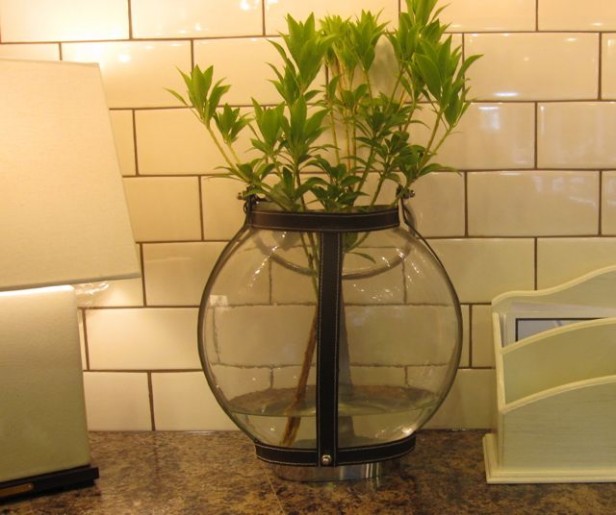 The tiles we are picking up are not a pure white, so they should work with a brown grout, although it will probably be lighter than the mocha shown here.

This might even start happening this weekend! Depending on the weather and whether we get sidetracked into starting a whole different project.

UPDATE: I did do that tiling! To read more: