Who would have thought a whale could be so heavy?

Once, there were two good-sized radiators upstairs. We removed one for floor-plan reasons (it ended up being inside a closet). After draining and disconnecting it, we put it on Craigslist for whoever could get it down the stairs without hurting themselves, us, or the house.  The winner brought about 18 bulky guys (ok, six), at least one of whom was a professional rigger, and it still took them 45 minutes to get the thing out.

With the insulation, the one remaining radiator in the upstairs was more than enough, even over a Minnesota winter. I mean, it is PLENTY warm up there. We decided the ideal case would be two much (MUCH) smaller radiators, which meant the old radiator had to go. 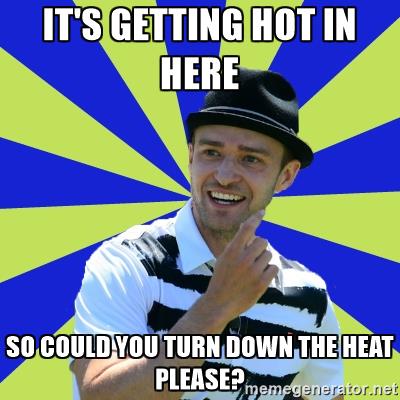 To drain a hot water radiator, you need to shut off your boiler and reduce water in the system by opening it at the lowest point until the water falls below the level of the radiator in question. Open up the bleed valve on the radiator to let air into the system.

(Every system is going to be a little different, so either you feel completely comfortable with this process or you don’t — if in the slightest doubt, check with a plumber. We disclaim all responsibility here (as per usual).)

You can hear when the radiator is pretty much empty if you listen while it’s draining, but the boiler pressure gauge shows the “height” of the water in the system, and that helps (if you know how many feet the radiator is above the boiler). 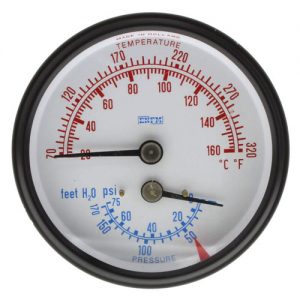 Once drained, use a pipe wrench to detach the lines from the radiator. Kev’s got a big ol’ piece of pipe that he puts over the handle of the pipe wrench to get more leverage when we need it, and we needed it here! Those connections were made a long time ago and had been painted over many times. 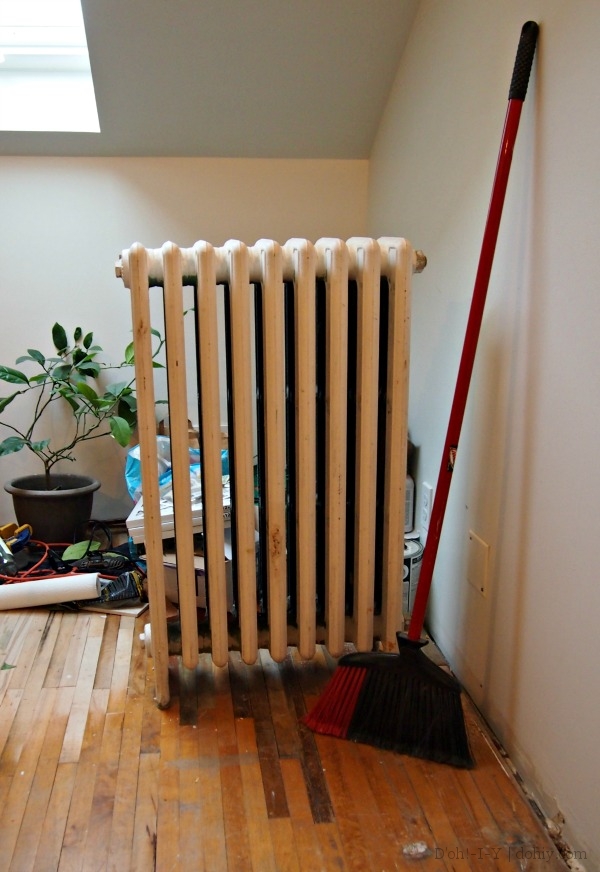 Be careful not to accidentally bend or otherwise damage the lines from the system — that would make it a bigger job. Also, if you unintentionally turn one of the supply pipes, you may loosen a connection elsewhere, and nobody wants a flood. Especially not you in your own house. Cap or plug the pipes (as appropriate) if you are going to refill the system before hooking up another radiator. Use thread tape and really snug ’em up good. 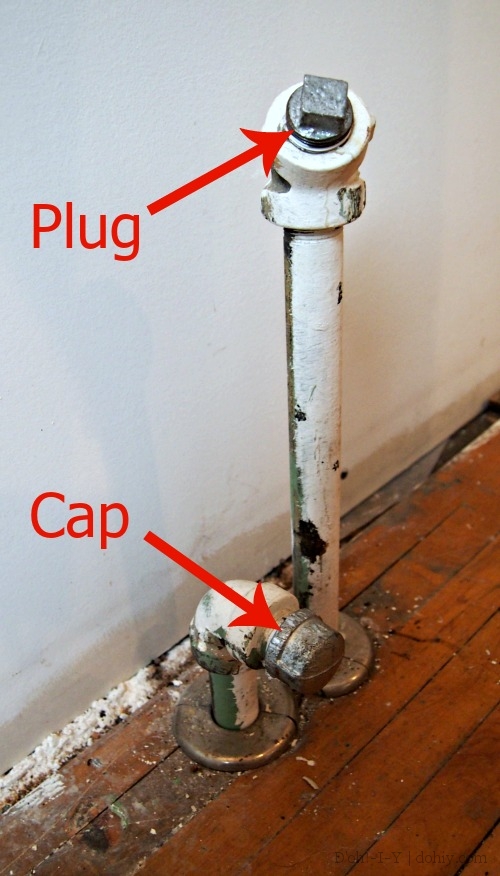 Without 18 (six) bulky guys and a rigger, we were not planning on hauling this thing out by ourselves. Plus, it had some issues that made it not ideal for re-use. So we decided to disassemble it and take it out in pieces for scrap.

Radiators are cast by the fin, so from what we read, we should be able to pry apart the sections at the joints. We thought a crowbar would do it, but Kev got a splitting wedge just in case. 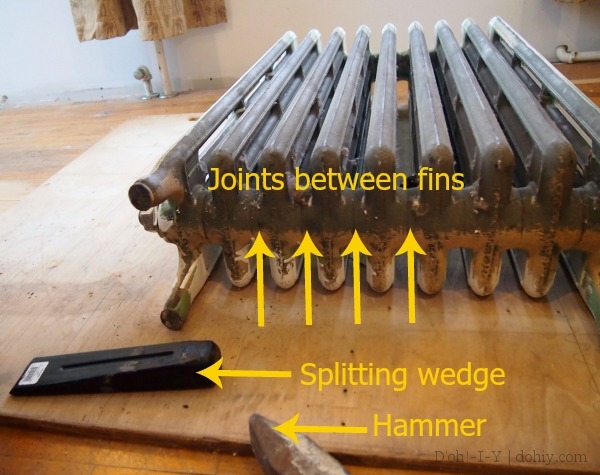 Note that some radiators, although not this one, feature connecting rods holding the fins together; they should be unscrewed prior to dissassembly. No sense fighting more than you have to. 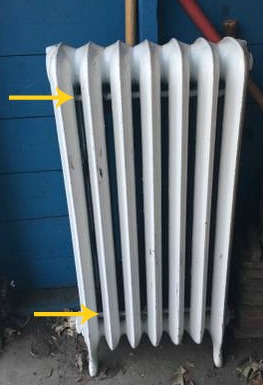 See the connecting rods on this one? You should be able to loosen those at the sides.

Well, guess what? After eight decades or so, those joints are not so supple. Kev ended up using the splitting wedge, and splitting occurred — just not along the joints. 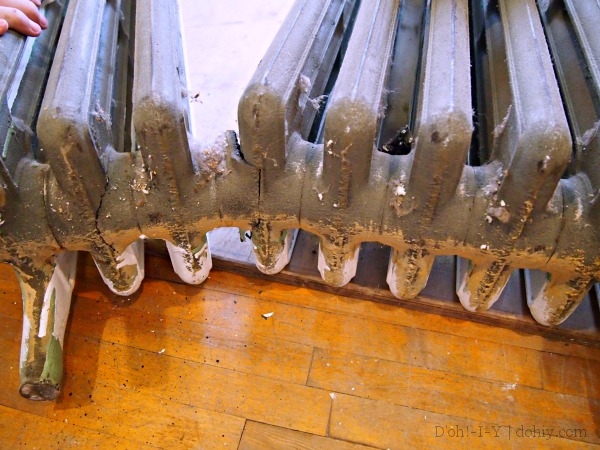 Cast iron is pretty brittle, and we just ended up cracking the thing. Since we weren’t re-using the radiator, that was fine — but BE YE WARNED should you have highfalutin ideas about disassembling a radiator to resize it.

Anyhoo, we proceeded with brute force to break it into three major chunks, which each weighed a manageable amount, maybe 55 lbs/25 kilos. Moving them was pretty straightforward except for all the radiator sludge. 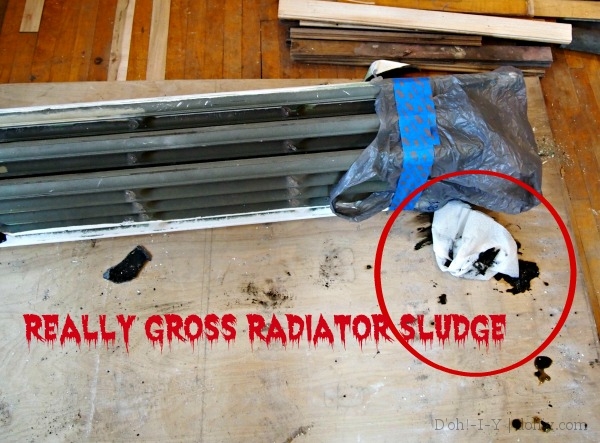 If you have something like this and don’t want to take it to the scrapyard yourself, you can have ten or more takers in no time by posting it in the “free” area of Craigslist. Radiators are ferrous (iron) scrap, which doesn’t pay very much at all, but for people who scrap for a living, about 150 lbs of ferrous scrap can fill out a load.

This radiator was smaller than the first one we got rid of, so we are semi-wimps, but it still wasn’t worth the risk of injury on steep stairs. It took less than 20 minutes to break it down and move it safely, and now it’s being recycled. If you have a valuable/unusual radiator or one that can be effectively reused, look into moving it. Otherwise, I highly recommend beating it into manageable pieces.