Walling and Waterproofing the Shower

Water, water, everywhere, so let’s go have a drink!

The primary mission of a shower is to get you clean. The associated mission–especially when the shower is on an upper floor–is to contain the water necessary to get you clean. And you probably also want to avoid water containment side effects such as mold spores and rotten framing members.

Since we were completely in charge of tiling the bathroom, we inherited the workspace with sheetrock installed everywhere in the bathroom except right around the shower. 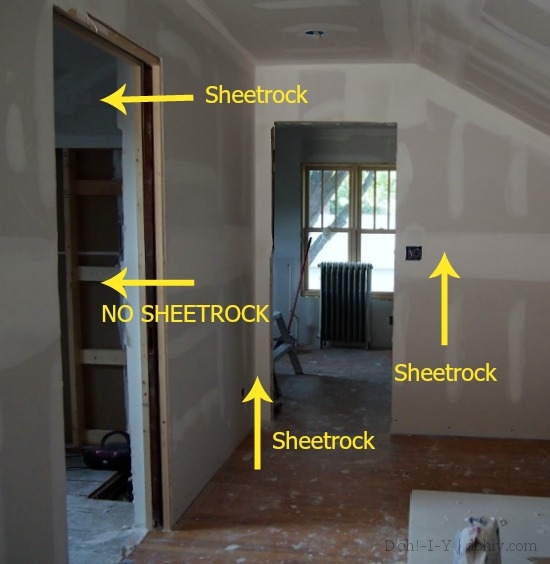 The missing shower walls were a little confusing, because we thought that the sheetrockers would just keep putting wallboard around there, albeit cement or tile backer board. We waited for the sheetrockers to come back with cement board, until I finally called our builder and found out … that was on us.

If you are splitting up tasks with a contractor, this is the sort of issue you’ll want to define! We were fine with doing it, just blissfully unaware.

Job one, then, was installing a vapor barrier. This is just a 4 or 6 mil plastic sheet around the outside of the shower area — a last defense if water gets through everything else we will put in its way. Some people say not to do it, others say it’s essential; it was easy, so we did it. It’s just stapled in place, and then drapes inside the flange on the shower base. 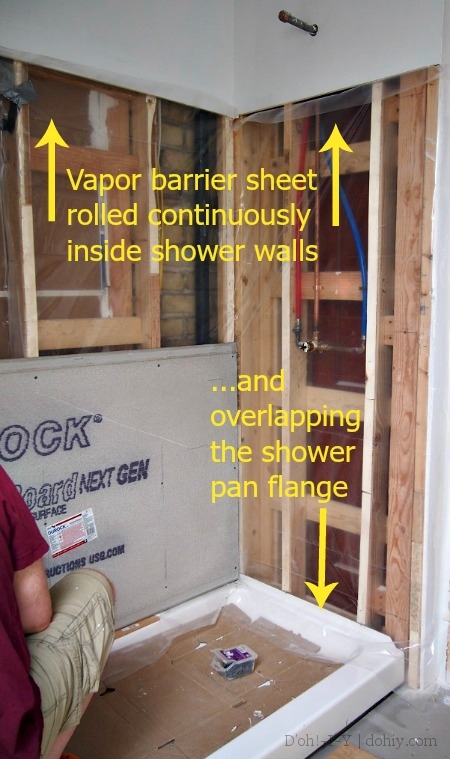 Next thing was lining the shower area with cement backer board. Cement board doesn’t absorb water and doesn’t foster mold and mildew. Durock or Wonderboard (seriously) appear to be the most commonly available brands. 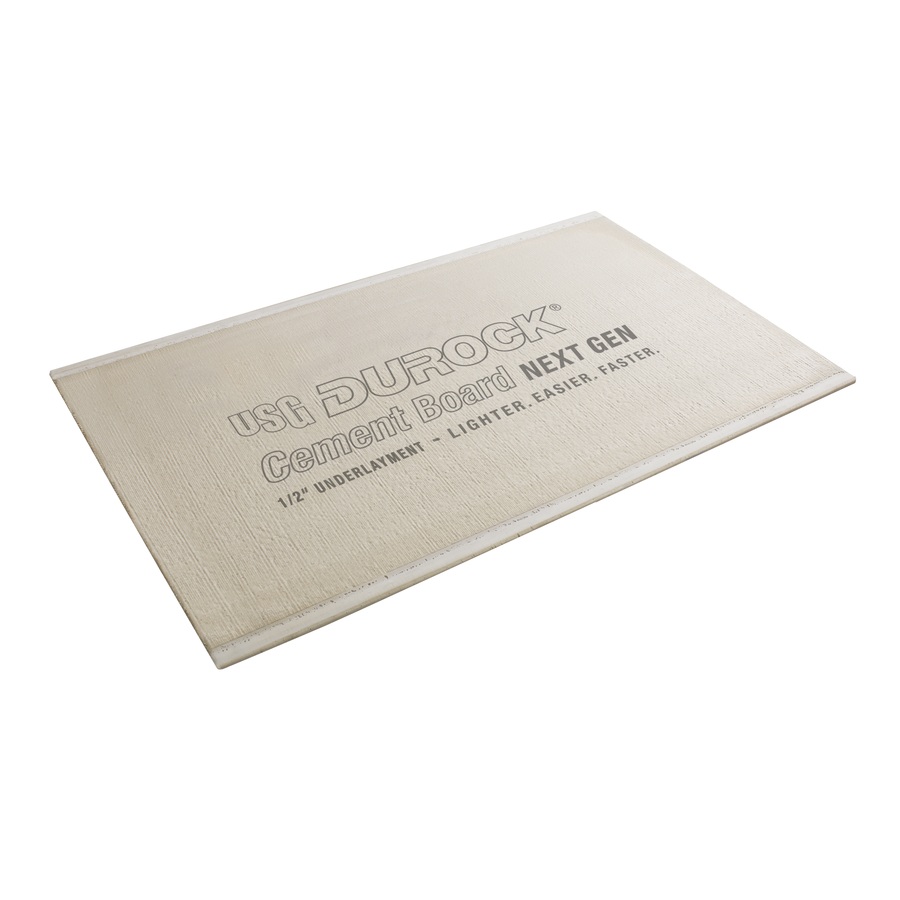 A few things to know about cement board: 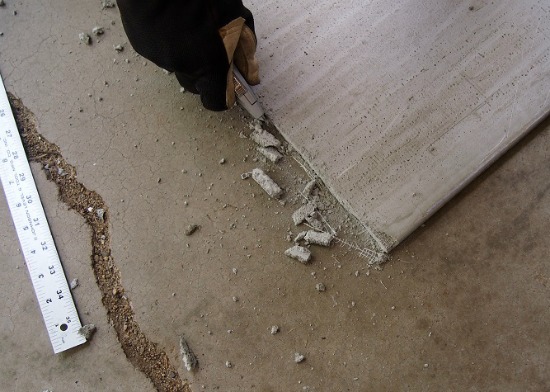 Trimming up an edge — see how crumbly and gritty it is?

Cement board is installed pretty much like sheetrock (except using cement board screws), but because it is (a) brittle and (b) backing for tile, it needs to be installed as flat as possible. While sheetrock bends a bit when drilled in, cement board will just crack or pull through the screw heads. The Kev spent substantial time furring out the studs around the shower so that the cement board would be flat on the wall. Then we cut the cement board and put it up (check out this cement board tutorial for more detail). 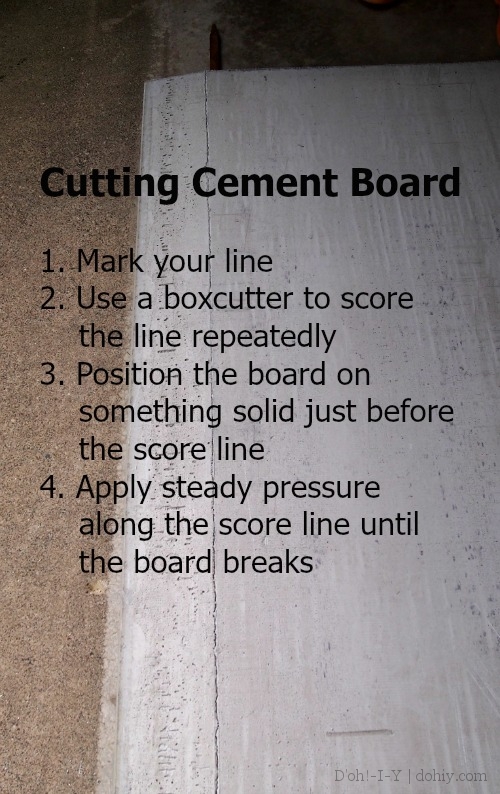 The cement board extends down over the shower pan’s wall flange, leaving a 1/4″ gap (achieved with tile spacers) that will be caulked later.

After install, the joints needed to be filled. Instead of papery tape and joint compound (both of which can mold), use cement board tape and thin-set mortar to close up joints. We also had to fiddle with the sheetrock/cement board intersection to make it line up neatly (another reason to fur out the shower studs), so we taped those gaps too. 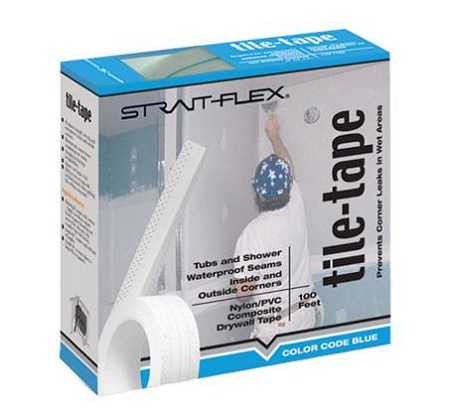 We used this, but there are other options; just make sure to get tape designed for cement board rather than for sheetrock.

Embed the tape in thin-set mortar and smooth it out so everything is even. Then, I used a different type of tape immediately outside the shower enclosure. On the sides of the shower, there are two outside corners connecting with regular sheetrock. I used corner tape that you wet down and smooth into place to make those angles strong and defined. 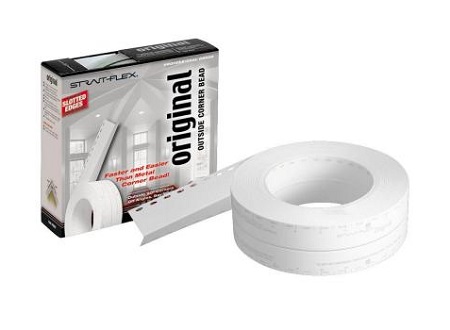 Makes outside corners sharp and less prone to denting

Apparently, I wasn’t taking lots of pictures, but I found this one: 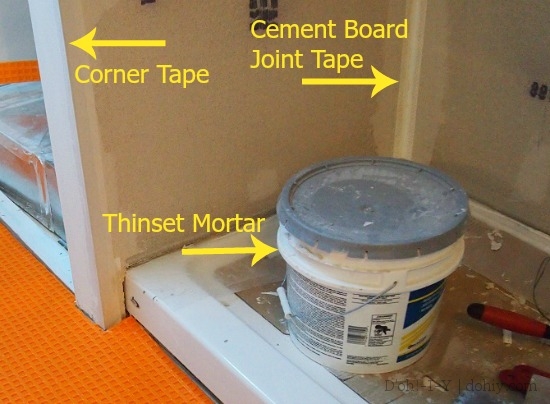 Ok, if this wasn’t all laborious enough, I decided to coat the cement board with waxy waterproofing goop. 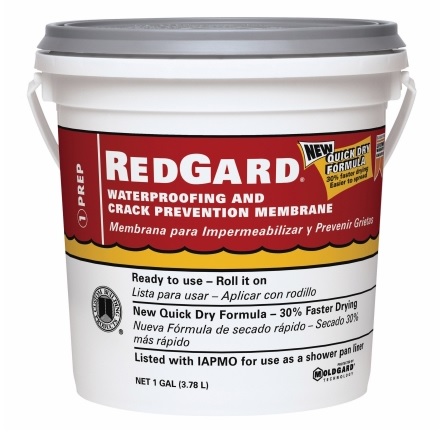 Many internet-commenting tile professionals hold that waterproofing cement board is pointless (the guy who tiled our main bathroom certainly didn’t do it). But, look, they are professionals. If I’m tiling this puppy, I want all the back-up I can get. Goop it is.

Said goop applies just like paint (but use old throw-away brushes or rollers). After an hour or so, add another coat to cover up any tiny holes you can’t see. 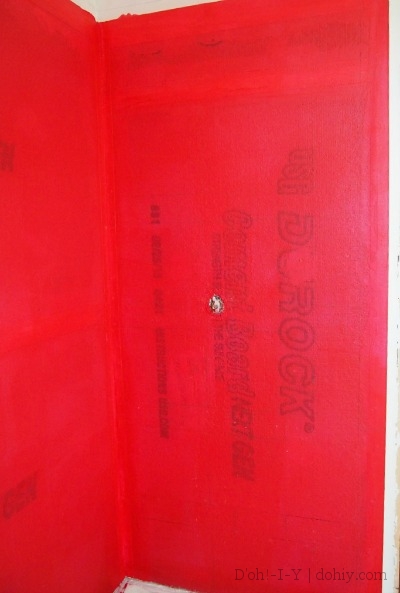 They are NOT KIDDING about the RED.

RedGard is around $50 a gallon, but guess what? No one ever finishes exactly a gallon, so you can pick up left-overs on Craigslist. I paid $20 for 3/4 of a gallon, and I have quite a bit left — I’ll probably sell it on for $10.

With the vapor barrier, cement board, taped joints, and membrane coating before we even get to the tile, I feel good about keeping the water where we want it. Should we ever end up showering in there.

This entry was posted in Bathroom, Construction, D'oh!, Walls & Floors and tagged how to install cement board, putting tile backer in shower, redgard on cement board, using cement board in bathroom. Bookmark the permalink.

14 Responses to Walling and Waterproofing the Shower