A Little Off the Top

On Thursday, six guys tore the roof off the house and garage and put on another. We were expecting it would take at least two days, but they started at 6:45 a.m., left at 9:15 p.m., and only took about 20 minutes for lunch. If I hadn’t seen it, I wouldn’t have believed it was possible.

And sooo polite. The youngest guy was sent to ferry drinks from the fridge periodically. I told him he could just come in whenever, but instead he knocked every time and removed his cap when he came in the house. Not sure how I never met this kid while my parents were raising him.

Remember I was obsessing about roof colors (while Kevin rolled his eyes)? When it came down to it, the subcontractor was using Owens Corning Oakridge shingles instead of the GAF colors we were anticipating, so the obsessing started all over again. It was more fun this time, because Owens Corning has a page where you can try options out, and one model house was ridiculously close to our house colors (and not too far off the period and style). We knew we wanted a warm color to coordinate with the hardscaping, and settled on Aged Cedar. 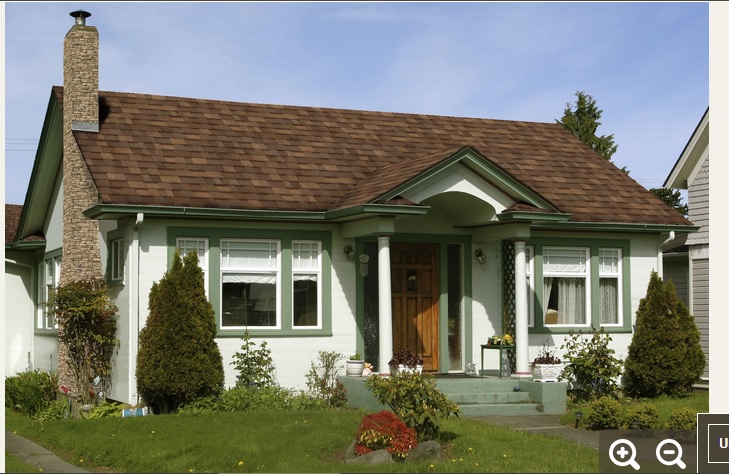 We also moved some stacks around, and went for a roof ridge vent rather than the vent boxes shown near the ridge in the before shot. This is all part of the cold-roof system that is best demonstrated by diagrams from people who know what they are talking about:

Instead of soffit vents, we have corresponding low-roof vents under the shingles themselves. 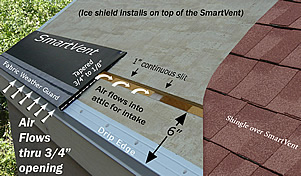 The shingle vent alternative (via)

Ok, so the roof mechanics are conceptually sound, and the shingle color was really just a detail. I still woke up during the night before thinking, “What if we’ve picked something way too dark and weird!?” But as long as it would still keep rain and snow off us, the aesthetics were just a bonus.

We prepped by moving all the plant containers, bird feeders, and porch furniture away from the house. And we bought soda and snacks. Beyond that, there was nothing we could really do ahead of time.

Dawn and roofers arrived early on Thursday. Once the tar paper came off the roof (by about 10:00 am), I was surprised how slatted the actual roof deck is. 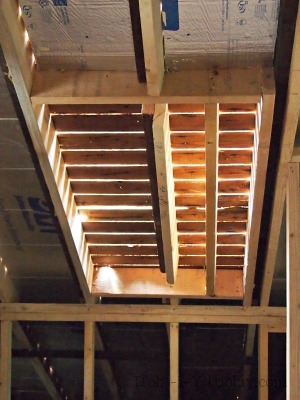 No good for vampires.

Roof off, one skylight in!

The immediate difference it made inside was remarkable. It’s positively airy up there! I did a small dance. 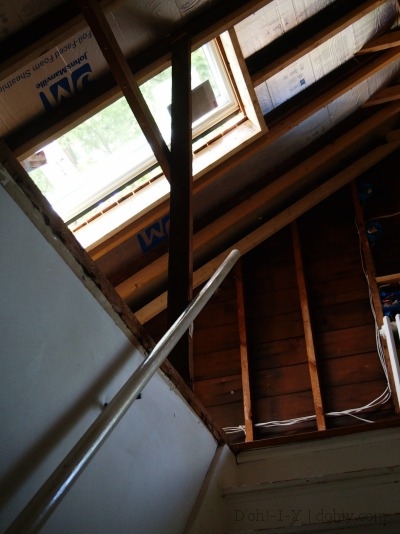 The first look up the stairs at the skylight. TREEHOUSE EFFECT!

A guy with a crane dropped the many shingle packages on the roof mid-morning. The whole house shook, and some cats were displeased. The actual shingling kicked off early afternoon. 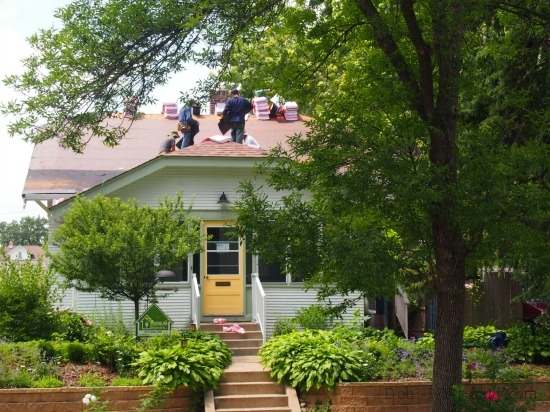 The crew put down tarps all around the house. I still anticipated that there would be a big mess afterwards — it’s a messy job. I grew up in a new subdivision, and we were always playing with shingles and siding pieces that had been left behind. That’s not an option for the neighborhood kids here. 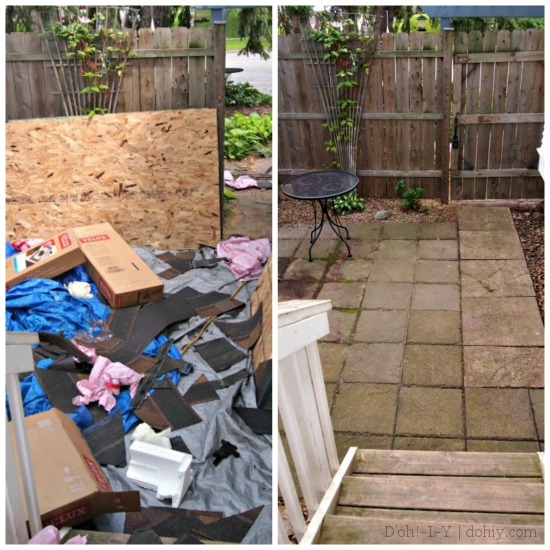 It went so well, I might have dreamed this re-roof, except that we have an actual new roof. Here’s the old roof: 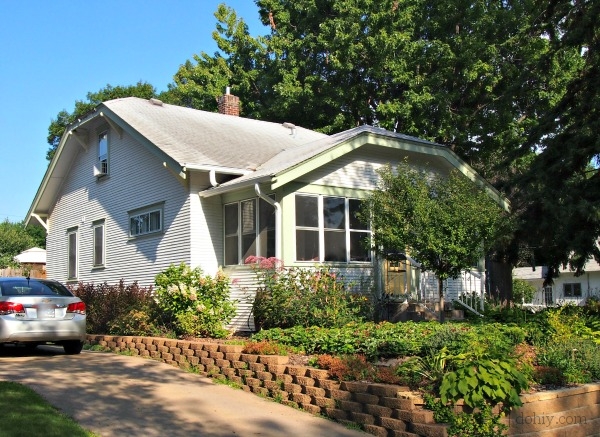 I know conventional wisdom says white house/gray roof, but I like the cedar color. Makes the place more cottage-y and snuggly. Coordinates with the hardscaping. And maybe someday the house won’t be white.

This entry was posted in Before & After, Garage, Siding & Roof and tagged brown roof on white house, cold roof venting to avoid ice dams, owens corning aged cedar, owens corning oakridge shingles, re-roofing an old house, roofing before and after. Bookmark the permalink.

6 Responses to A Little Off the Top