And Then I Threw the Looking Glass

We had such a beautiful dream. What went wrong?

All I wanted to do was move a mirror. Not even move it — just change its orientation.

The relevant mirror is over the sideboard in the dining room. The sideboard is 52 inches wide, the mirror is 33 inches. According to designers, a mirror over a credenza should be two-thirds to three-quarters the width of the furniture. The mirror didn’t quite make it to two-thirds. A bigger issue was that it was too short. When tall people wandered by, their headless torsos followed. 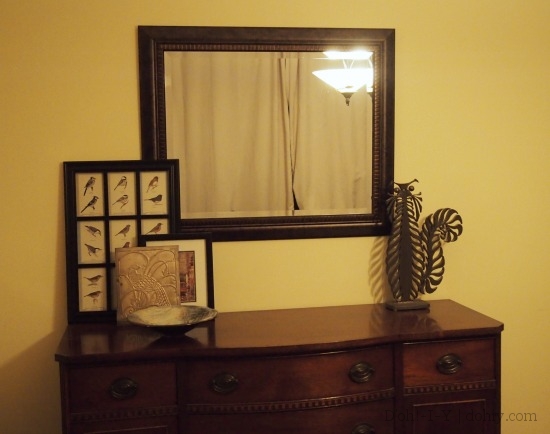 I decided to go nuts and turn the mirror to vertical. I measured everything, then held up the mirror to check how far above the sideboard it should hang (designers say 4-6 inches). It’s heavy, Kev was out, and I’m a klutz. The mirror slipped and banged into the sideboard, leaving dents in both pieces.

This not the queen of mirrors, but I like the beveled glass and the frame is a good width. It’s also relatively simple, which we wanted for the dining room. One dent does not trash make — let the fix begin!

I applied wood filler over the dent, and sanded into shape, and ended up wrecking the surrounding finish with my overenthusiastic sanding. 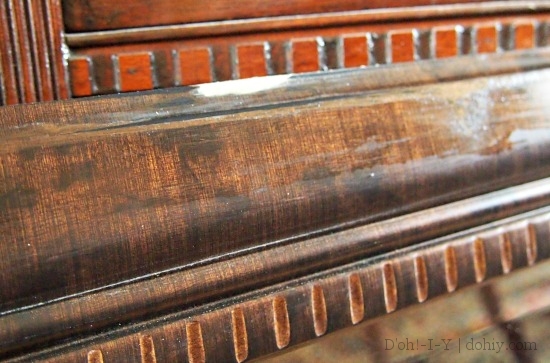 I was in frame-refinishing territory anyway (which was fine. FINE), so I decided to go all in. The frame features quasi-dentil molding, but the pattern only lined up in one corner. I Dremelled new grooves to match up, then applied wood filler to the “bad” grooves. 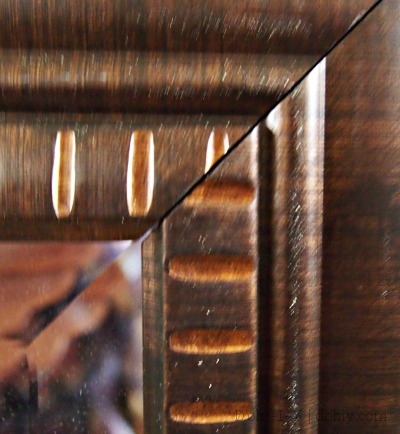 The grooves did not line up (and caused unfocused photos?). I have real things to worry about, but this still bothered me! 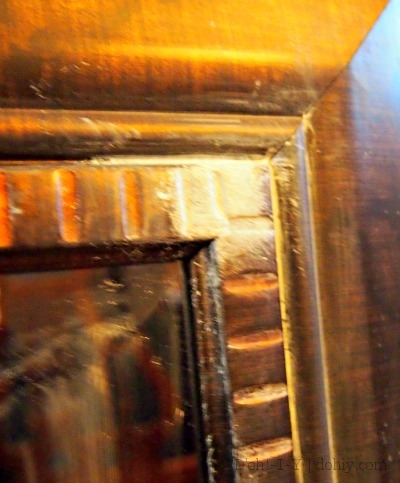 I used leftover primer and paint to vaguely match the old finish. While that dried, I cleaned my measuring marks off the wall. In the process, my toe caught and broke some loose veneer on the sideboard.

Next, I touched up the wall to cover the old nail holes. This color is Glidden’s Honeytone. I later discovered Benjamin Moore, but I still like this color. It changes with the light, and it’s a cosy, soft yellow without being banana-esque. Or lemon-y. It doesn’t resemble any yellow fruit, is my point. 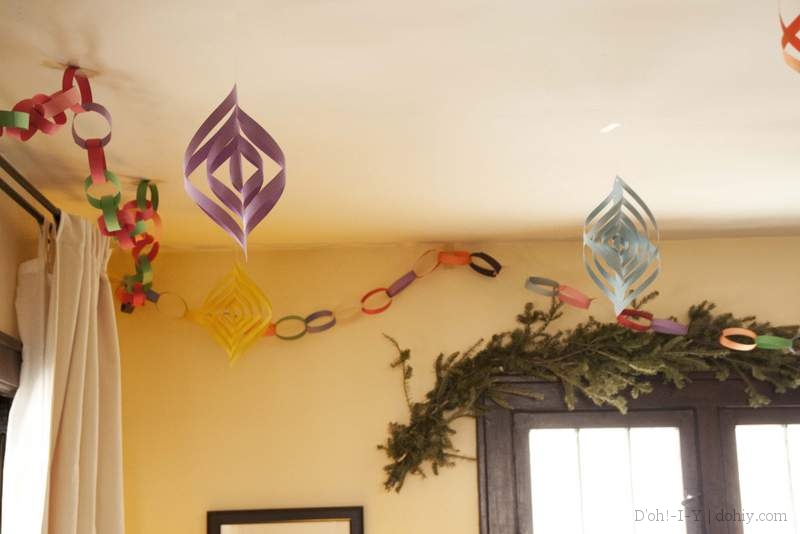 It shifts from soft yellow to creamy, depending on the light.

I decided to apply “Spanish Copper” Rub-n-Buff to the frame. There are a few copper-y things in the living/dining room, and I thought the worst outcome would be painting over it. Thus girded, I started rubbing/buffing. 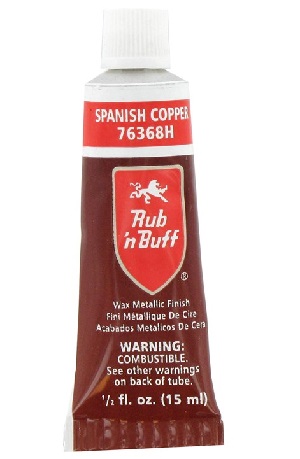 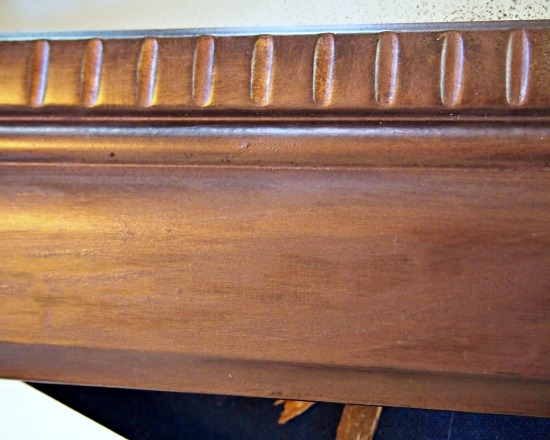 Maybe I got a bad batch (looks more coppery online) or I picked the wrong color. I probably should have gone for Autumn Gold and/or Ruby. 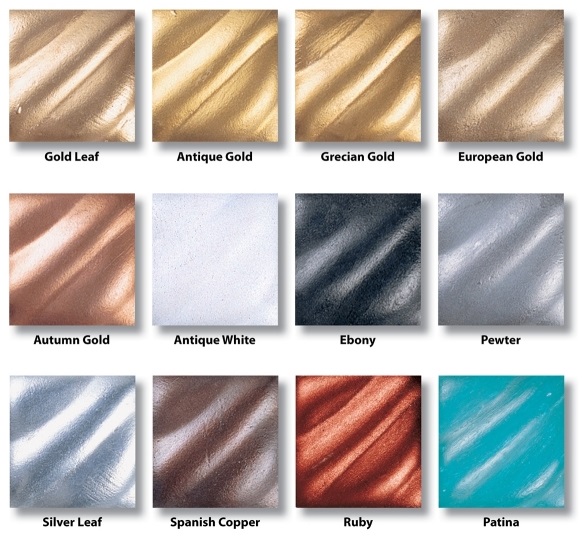 Pick by color rather than name.

Dangit! And Michael’s stopped selling Rub-n-Buff in their stores in some sort of deal with the devil. Instead, I picked up metallic acrylic paint. I’ve used acrylics over wax before for polychroming old light fixtures, so I knew the paint would stick. I lightly brushed on the acrylic, then rubbed it to blend. I did two coats like that, leaving some of the wax showing. 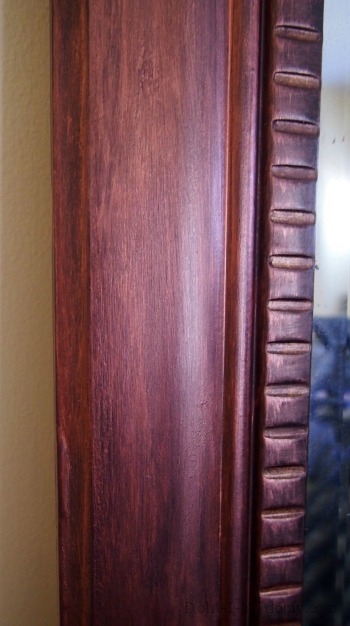 I thought after I got it back on the wall, I could try our tall candlesticks with it. Could I find them? No, I could not. I looked through many storage bins, ultimately finding them in the bin with the label reading “tall candlesticks.” Seriously. I despair.

I cleaned up the mess, and started to re-hang the mirror. And then I dropped it. I AM NOT EVEN JOKING. I DROPPED IT. It’s not even fun to write about anymore! 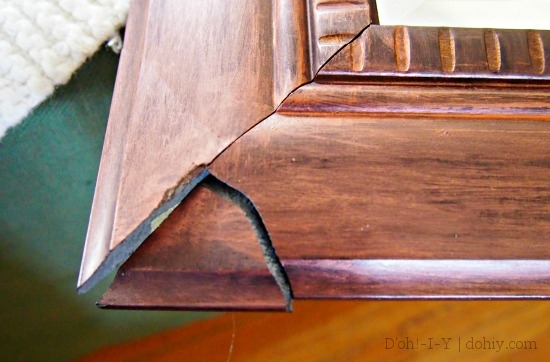 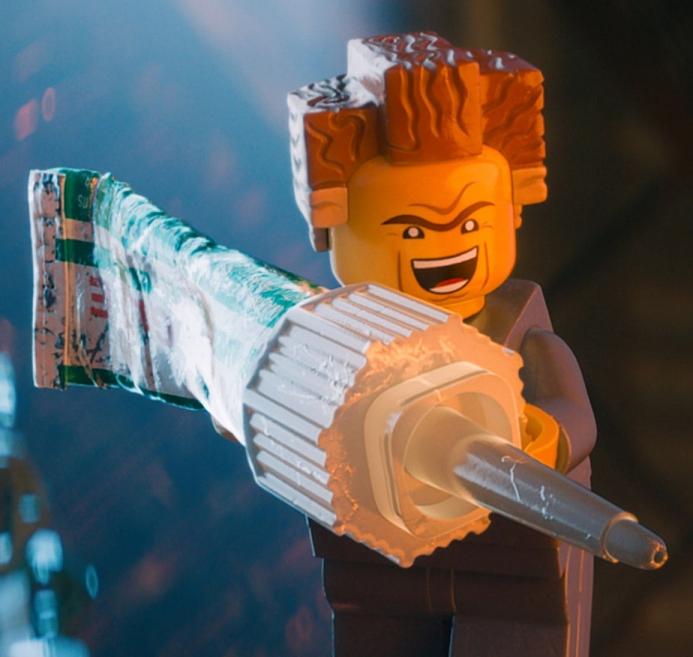 Putting the corner back on was relatively easy, considering my mood. It’s not an obvious fix, and I will touch up the paint later. For now, I’ve hidden it behind a cat sculpture BECAUSE ENOUGH ALREADY. 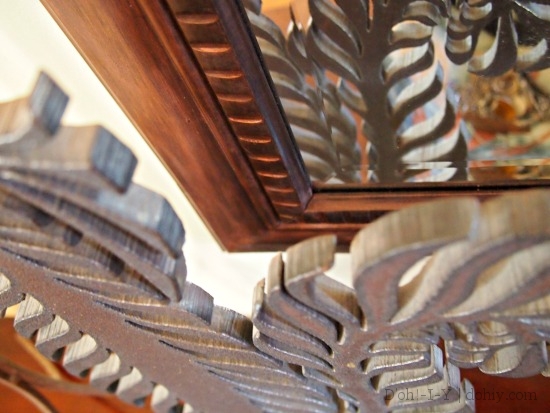 The mirror flip should have taken 20 minutes. Several days later, the mirror is back. 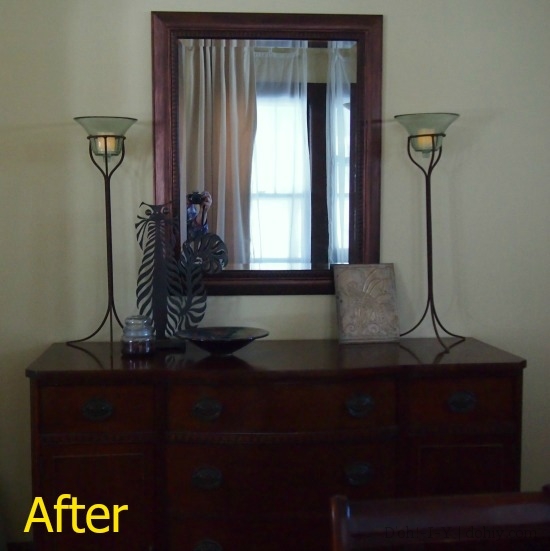 That’s the formal after. Here’s the real after: 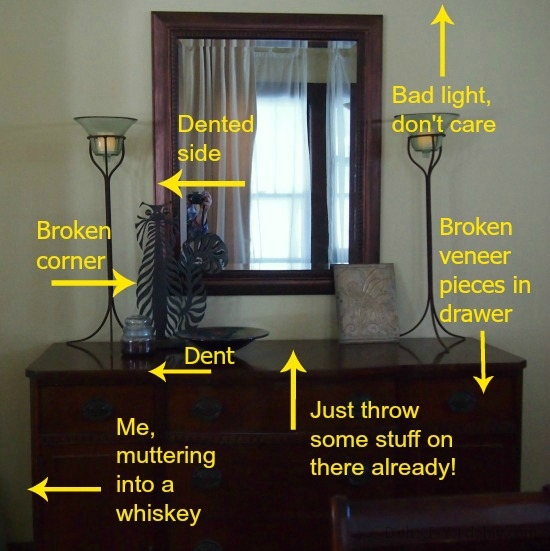 But, hey! I eliminated the floating torso effect!

3 Responses to And Then I Threw the Looking Glass