Update: I still recommend this project–and my hacks to the original tutorial–but I’ve discovered that it doesn’t work well with a heavy fabric like black-out lining. I’ve noted in [bold and brackets] below where this is an issue; otherwise, all good!

Since our bedroom project has lacked nothing but window coverings for long enough to gestate a human, I thought I might see about making some progress on that front.

I generally used Little Green Notebook’s revised blind tutorial, which uses a mini-blind base to build a Roman shade that you can retract. The basic concept is that you remove the vinyl slats from the blind, leaving the cords intact. Then you cut and hem your shade so it’s the same width as the mini-blind and an appropriate length. Attach the shade to the header rail, run the cords through loops on the shade’s back to a new bottom rail, and Bob’s your proverbial uncle. 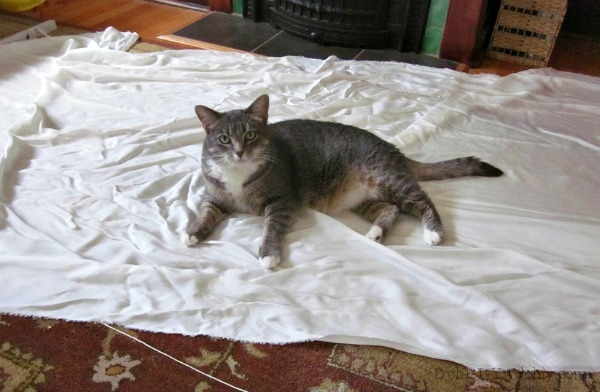 I want these to last a while with daily use, so I modified LGN’s low-sew version. Call my version the “some-sew” model, or maybe the “I don’t have a glue gun” edition. This version takes more work… 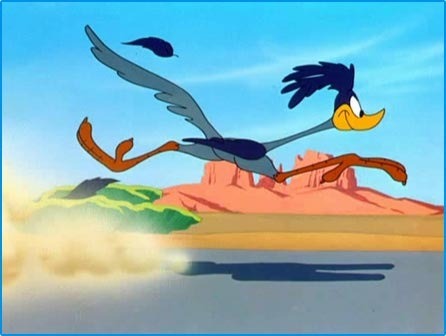 …ok, still with me? I understand bailing at “more work” but the changes to the basic plan make this thing more durable. And it’s not that much more work. Here are the modifications, which can be read alongside the LGN tutorial (I referenced the step numbers from her version below):

I generally followed the LGN instructions for making the shade (steps 1-4 in the LGN tutorial), except I sewed in a black-out liner (step 3) instead of a lighter lining. I wanted the shades to really darken the room because the windows face south and west — plus, the house to the south has a huge window opposite ours that is often lit late at night. I covered the black-out liner with an ivory fabric, and edged with yellow grosgrain ribbon. [Nope! Unfortunately, this project doesn’t lend itself to black-out lining. Stick with a lightweight fabric and backing, as LGN does.] 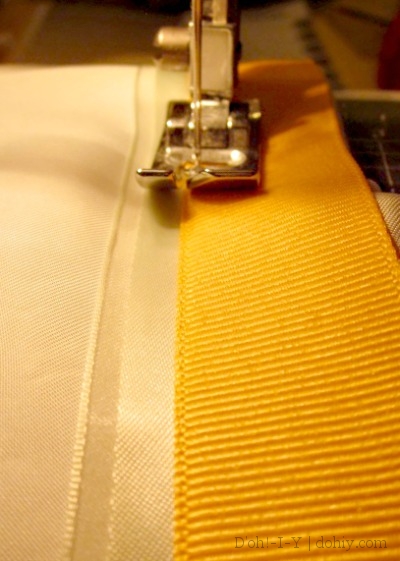 At step 5 in Jenny’s tutorial, she cuts off the cords just above the bottom rail, but this rail is easy to remove, allowing you to keep the full length of the cords. You just need to pry off the plugs in the bottom rail that cover the knots in the cords. Untie the knots and the rail comes off. If you want a longer shade, it’s nice to have all the possible length. 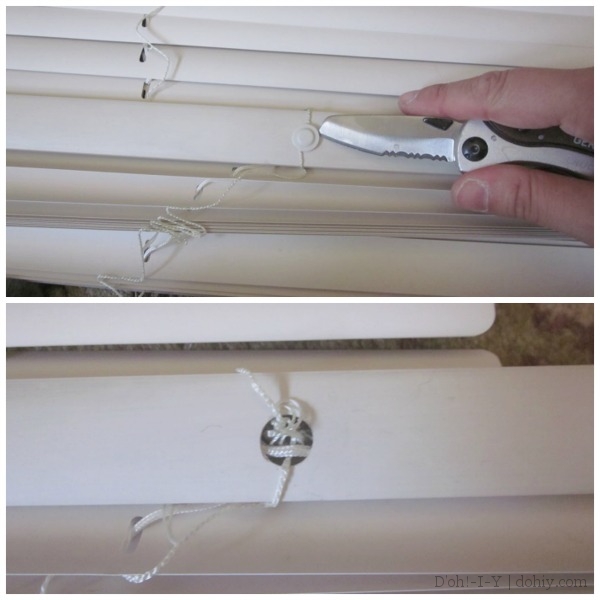 Other than this variation, I followed LGN step 5 to remove the unneeded parts of the blind cords.

3. Prepping the Shade to Attach 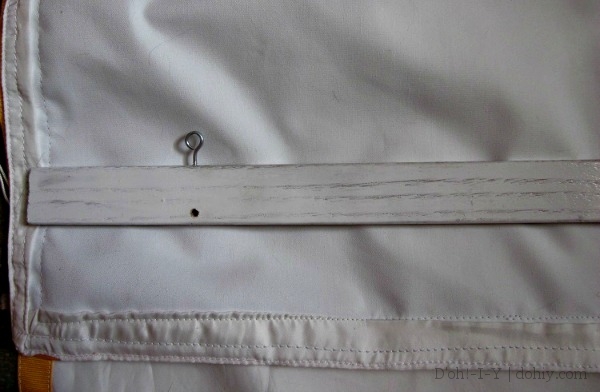 The second half of step 9 in the LGN tutorial has the shade glued to the top/header rail from the mini-blind. I just have trust issues with glue, so I drilled a series of five small holes along the top front of the mini-blind header. 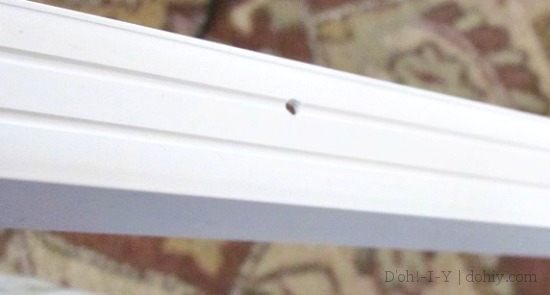 I sewed through those holes into the shade to connect the two together. THEN I added glue as well.

It’s not mentioned in the LGN piece, but be careful not to glue out all the way to the ends. I left an inch or so free at each side so I could use the mini-blind mounting hardware as-is. 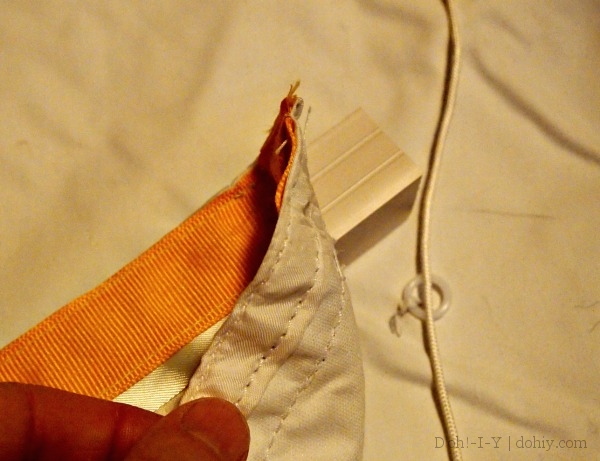 This gap at the end will make more sense shortly.

I followed step 10 of the tutorial as written — you thread the cords from the blind through the rings on the back of your shade, then tie the cords to the eye screws on the lift bar. 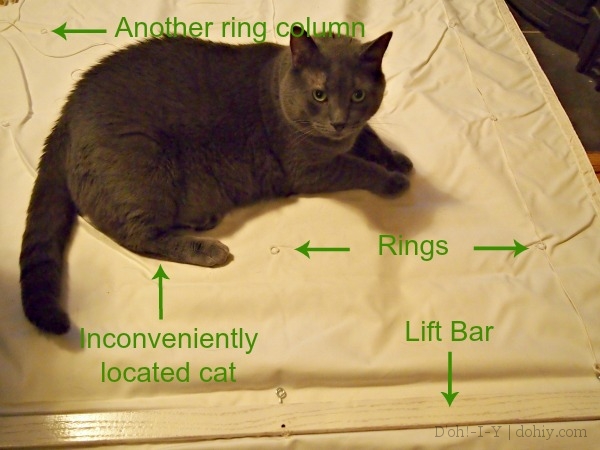 In step 10, Jenny also says that you can glue on your trim. I sewed the trim on when I put together the shade in my step 1.

Fortunately, the legs from the bedside table project were just right. I cut them off to extend from the top of the window woodwork to the top of the blind. I screwed these blocks into the wall, then the blind hardware attached at the top. 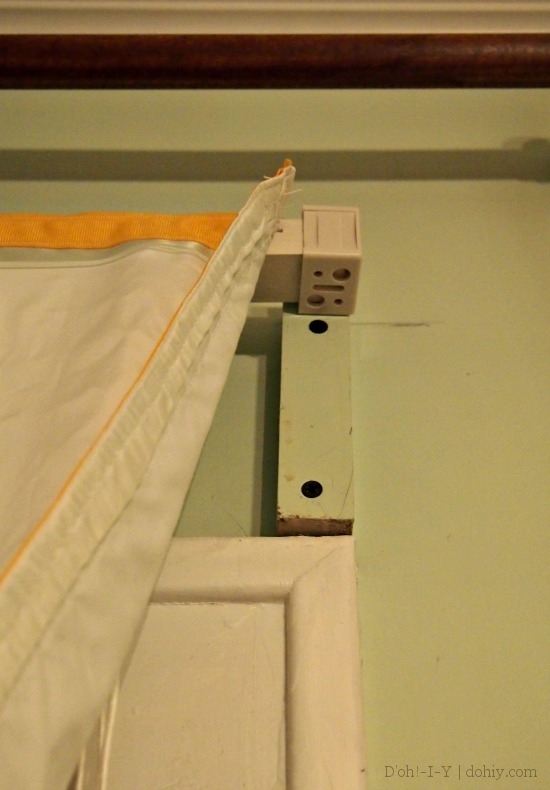 The block and mounting hardware won’t show when and if I ever finish the curtains that will hang over the top.

Here’s where the loose edges I mentioned in Step 4 come into play. When you push the header into the blind hardware, there are plates that slip into the front of the brackets to trap the header in place; you can see one of them in the picture above.

Since I used black-out backing, the shade is stiffer than the ones shown on LGN. [Again, don’t use black-out lining or heavy fabric for this project.] So this happened when I first lifted them:

I laughed out loud, this looked so ridiculous! When I fiddled with the folds briefly, it looked a lot better [but you won’t have this problem at all if you keep the blind fabric thin]:

Not quite so bunchy.

I imagine that the black-out fabric will relax a little after the shade is used a while [it didn’t], but if it doesn’t, this result took five seconds of tucking. Here it is down: 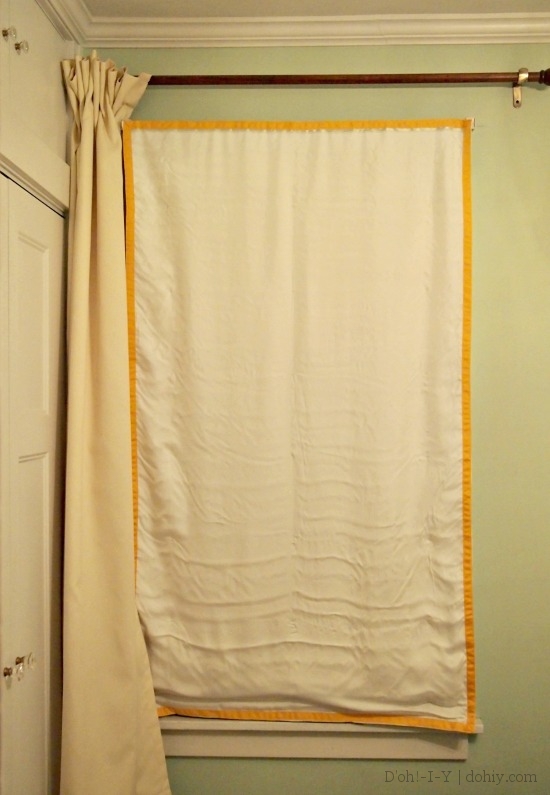 I clearly need to hit this with the steamer, and my temporary curtain isn’t making my heart sing, but still. PROGRESS. [Or so I thought at the time!]

So it’s just the curtains (and the steaming and the velcro) standing between me and this bedroom project being completely done! Many thanks to Little Green Notebook for the shade tutorial! [It’s a good tutorial, but keep the fabric lightweight! Read the update here.]