Welcome back to the neverending tile project!

I thought the backsplash was done, but then we picked fancy porcelain switch and outlet covers. In addition to being fancy, they are small and unforgiving. The unforgiving covers of fanciness required that some of the tiles had to be re-done to avoid gaps.

THE LESSON? Pick and install your dang wall plates before indulging in tile-related self-congratulation.

After checking all the switches and outlets, though, I was relieved to find that only two boxes needed reworking. 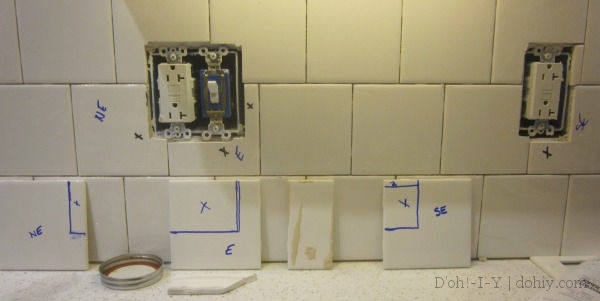 Two outlets, three tiles. Later, it turned out to be five tiles, but I stopped taking photos by that point.

I used a chisel and hammer to pry the “bad” tiles. Surprisingly, the tiles did not break, but they did take bits of the underlying sheetrock with them, while also leaving lots of lumpy tile adhesive. 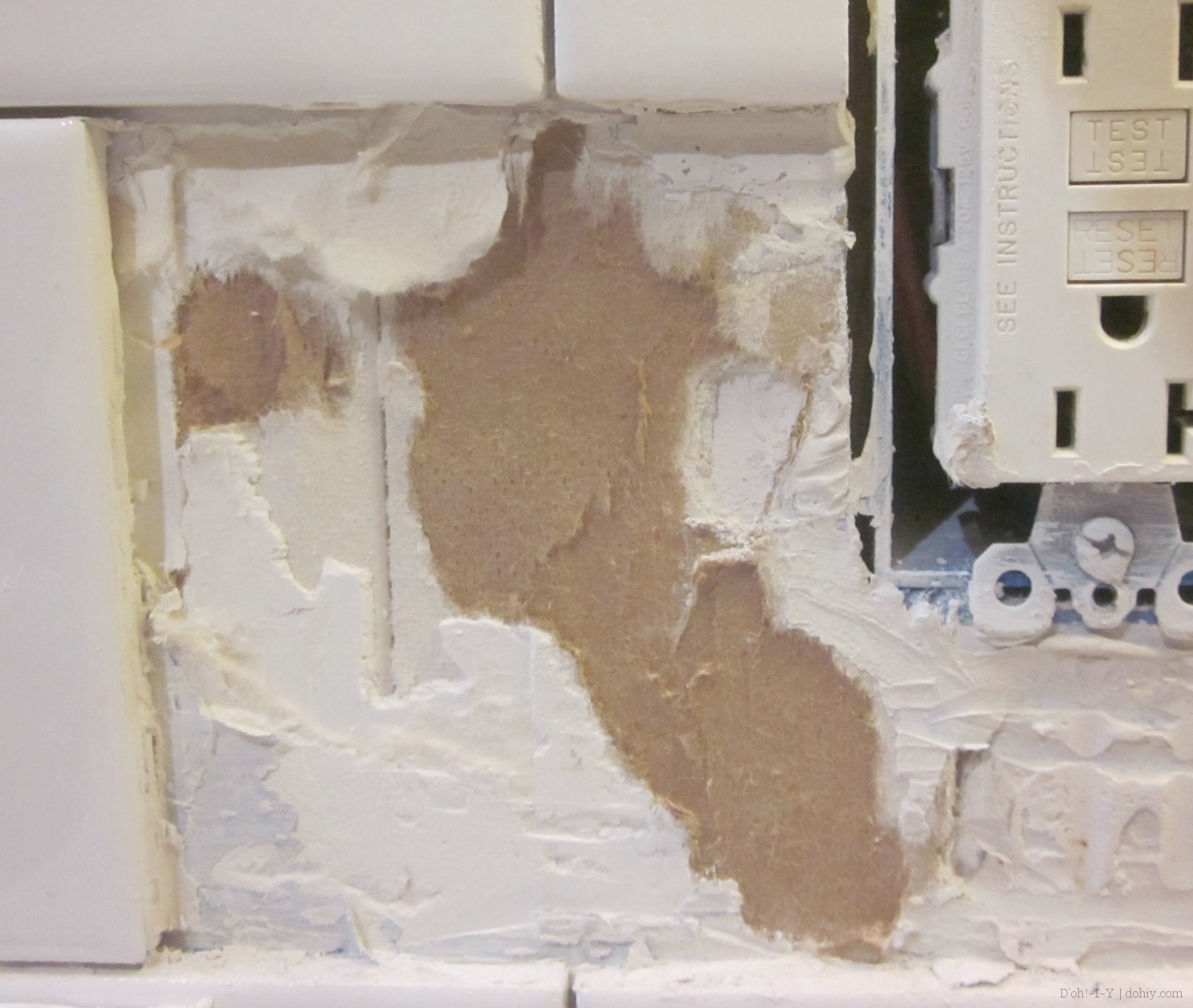 I used the chisel to remove the excess mastic. This worked well to remove the dried adhesive, but some of it came away with even more of the sheetrock paper, leaving crumbling plaster in spots. “Rat fart!” I exclaimed. (I say this when trying to avoid saying other things. I also said a few other things.) 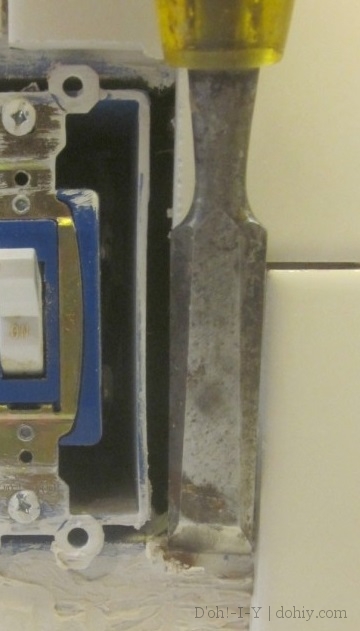 Crumbly plaster is not a good substrate for tile (DUH!), so I had to fix that little problem. Recall this is all because I’m trying to use wall plates I didn’t plan for, rejecting perfectly serviceable plates we already had. I give myself a headache sometimes.

ANYWAY, having made my bed of tiles and being required to lie in it, I fetched the drywall joint tape and joint compound. 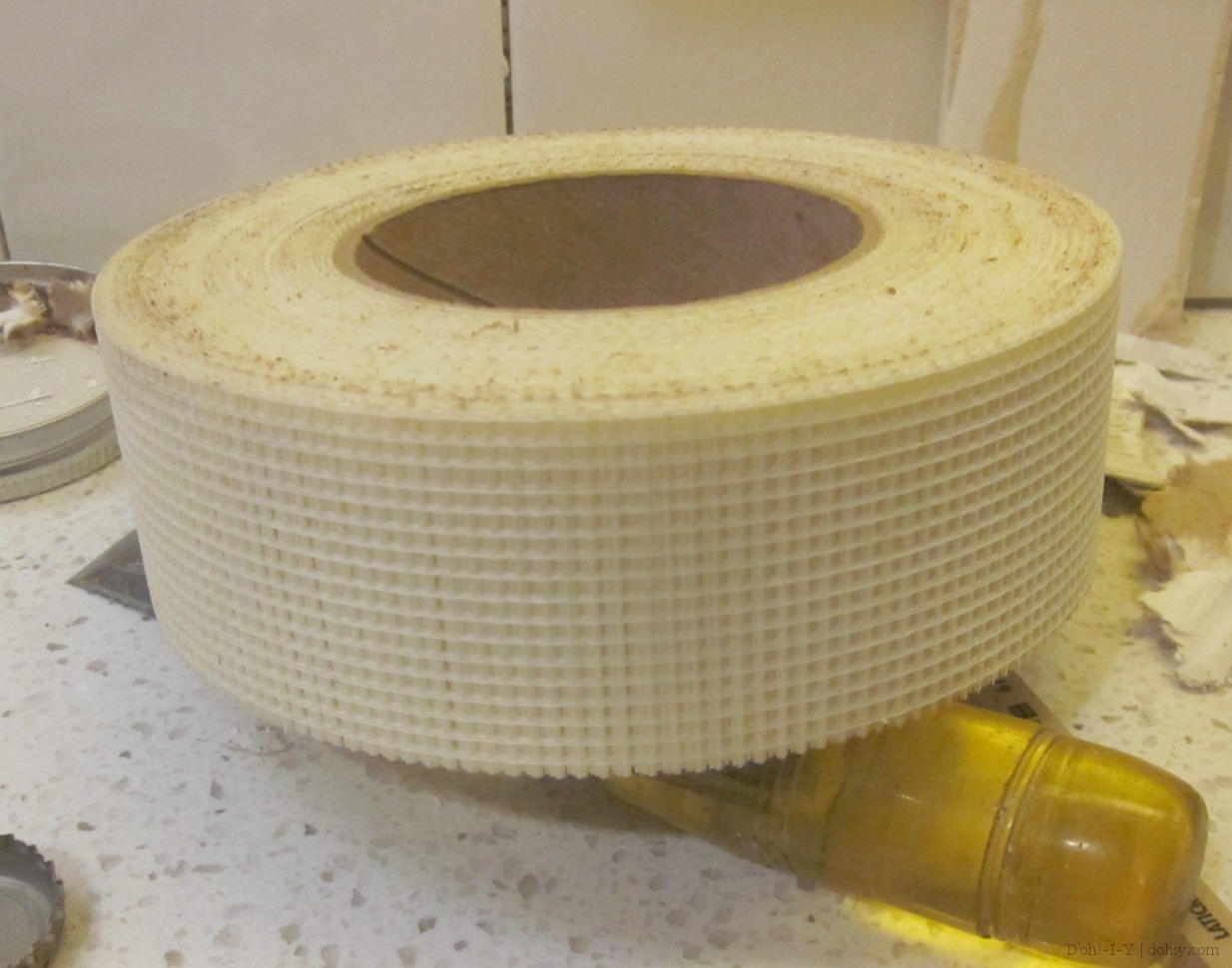 I cut the tape to size. 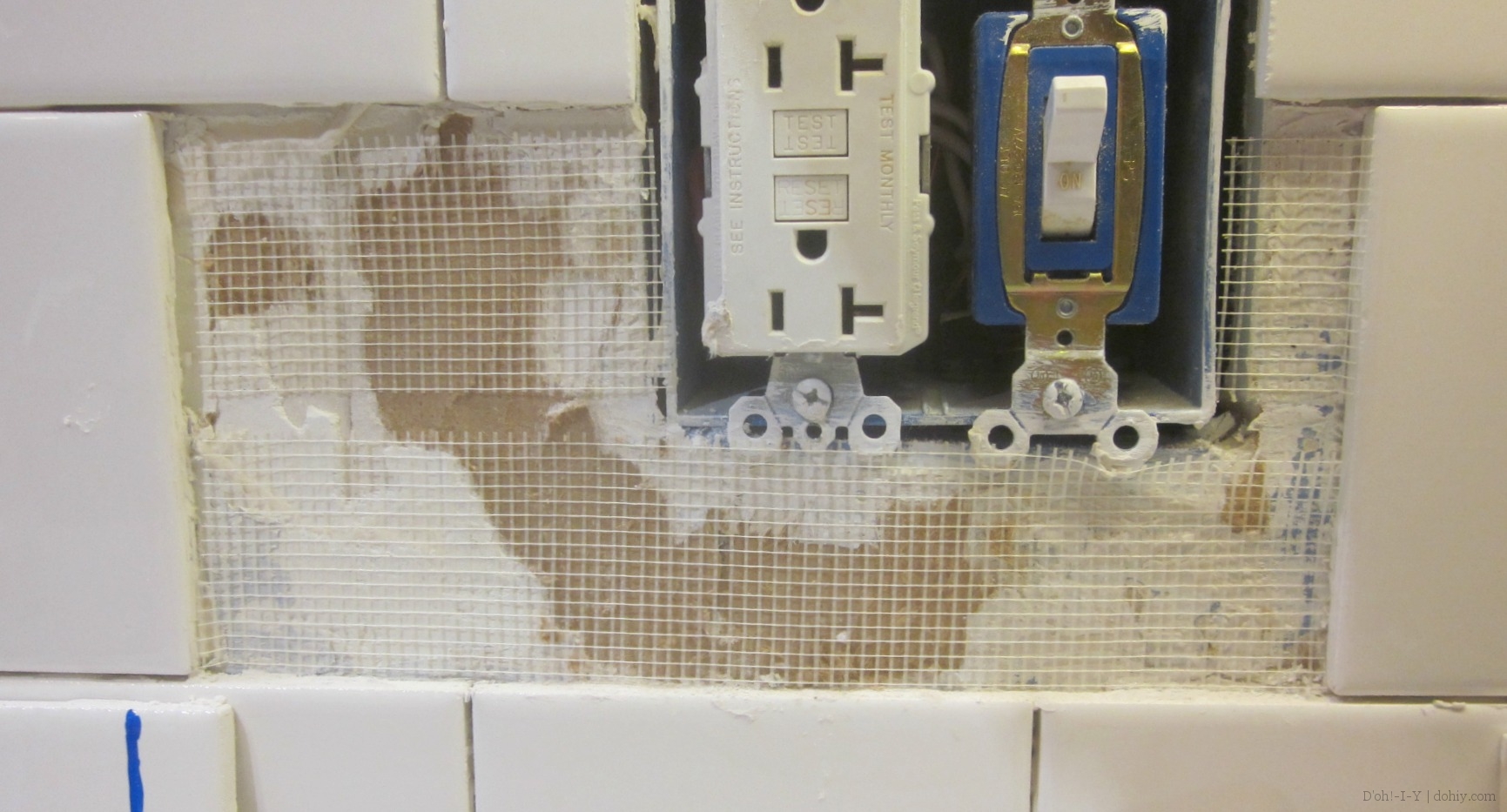 Then I took the tape down and applied the joint compound to the surface. I pressed the tape into the compound and smoothed off all the extra goo to make a fresh, flat surface. 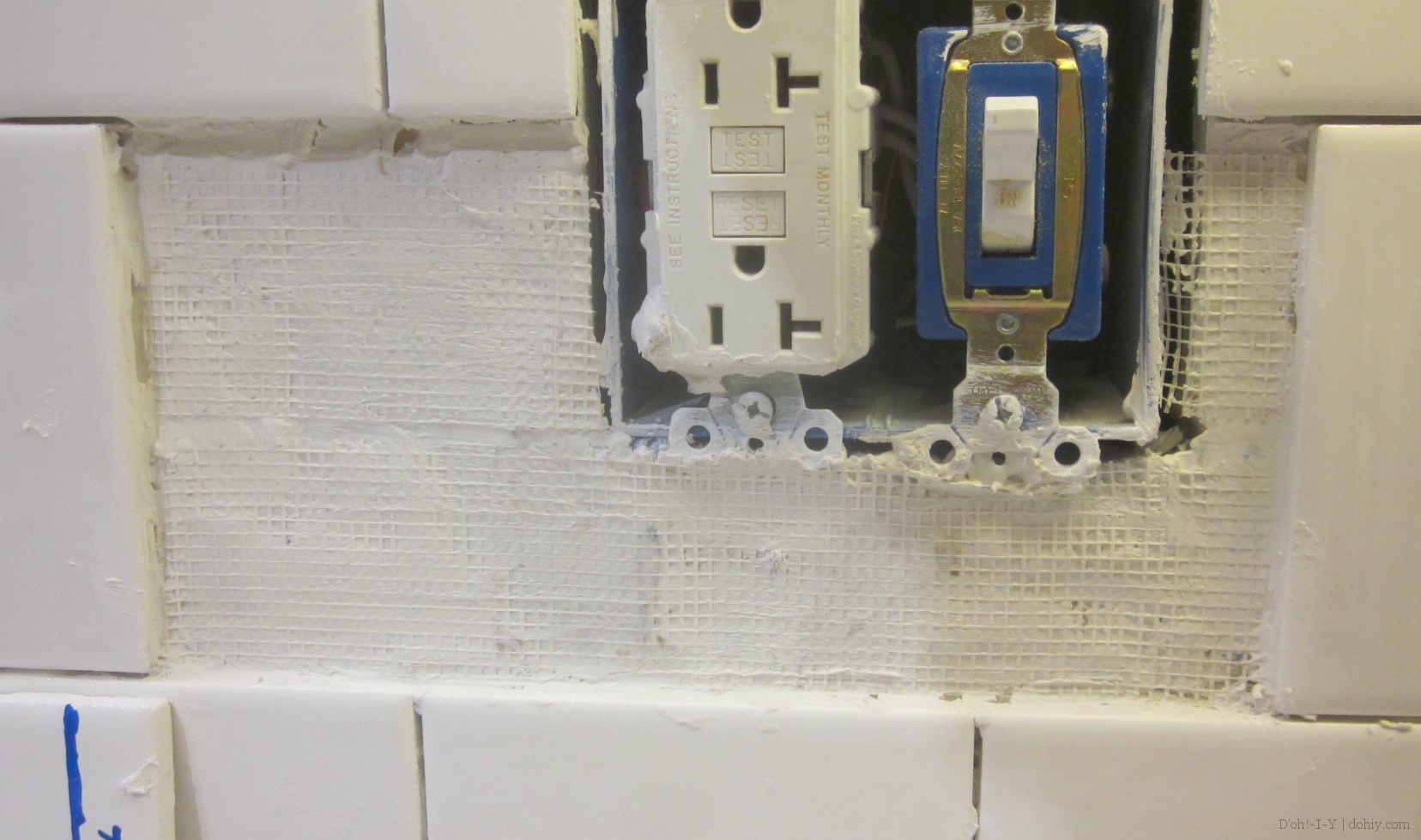 I cut (and double-checked) the new tiles while waiting for the new surface to get good and cured. Here’s a tile cutting tip I hadn’t mentioned before: after you cut tile, there will be tile-colored dust and debris around the saw. It looks harmless, but do NOT sweep it away with your hand. It’s full of tiny sharp shards, and many will end up stuck in your palm. Unpleasant.

Some time (and a few tweezings) later:

After this photo, I determined that I also had to recut the two tiles above the box on the left, grr.

Hurrah. This got me back where I was over a week earlier! Now, I can ply the outlets with spacers (as discussed more fully here) and all the plates will fit.

Meanwhile, we made a grout decision from the options we considered: TEC Antique White. More grey than white, more beige than grey, it’s the ultimate compromise!

So I applied that. My main advice about grouting is to follow the instructions. And I really do mean that! The TEC grout says to work on only about 5 to 10 square feet at a time. I decided to do all 20 square feet of the backsplash, ignoring the wisdom of TEC. And then my arm fell off, true story, the end.

THEY MEAN IT when they say 5-10 square feet at a time. First, it’s not just applying the grout; less than an hour later, you need to rub down all the tile with a grout sponge to make all the joints neat and uniform.

It’s a weird thing to do with your arm — just ask Ralph Macchio. Plus, it takes a fair amount of force to wear down the grout. My arm is killing me now! It would have been better to mix up smaller amounts of grout and do this job in short bursts over two or three evenings. Sure would have saved me some money on painkillers.

Another tip for backsplash grouting: use a “margin float” to apply the grout. 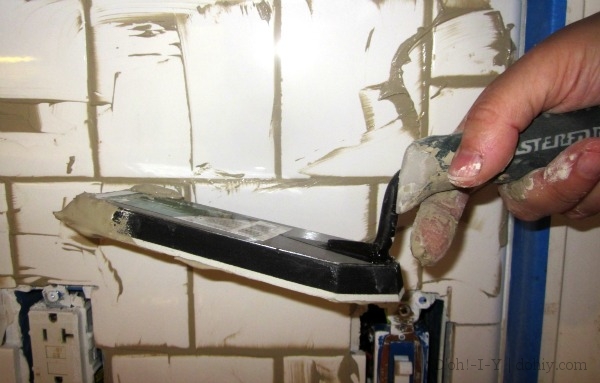 A margin float is designed to deposit grout on the edges (margins) of a tiling area, but a backsplash can be a cramped area. It’s all margin. The offset handle also makes it easier to get under cabinets and around outlets. I bought this float “just in case” with the intention to return it if I didn’t need it, but I only used our regular float for ten minutes (if that) before giving up and trying this option. Much easier.

Finally, make sure you really mix up powdered grout. When I started grouting, I saw a few red streaks on the wall, causing me to loudly query where I was bleeding from (this reminds me of a joke that most of the English sorts among you will already know). I wasn’t bleeding on this occasion — I just didn’t dissolve all the tinting bits in the mix, so they would streak from time to time when I was spreading the grout. 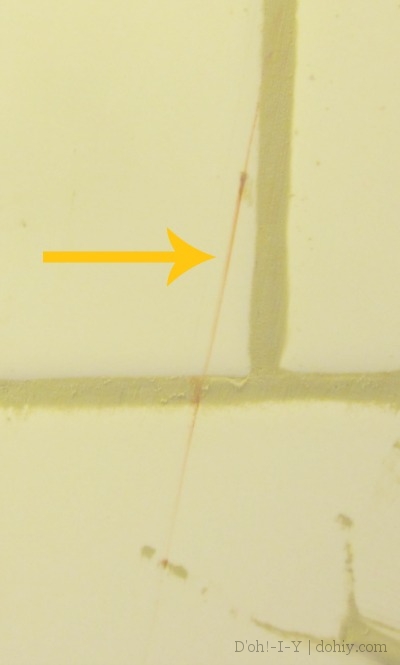 Fortunately, these buffed off as I continued spreading the grout, and I never did start bleeding.

Here’s some tile with grout slapped on it. I am liking the warm tone of the grout. Not very white for “antique white” is it? 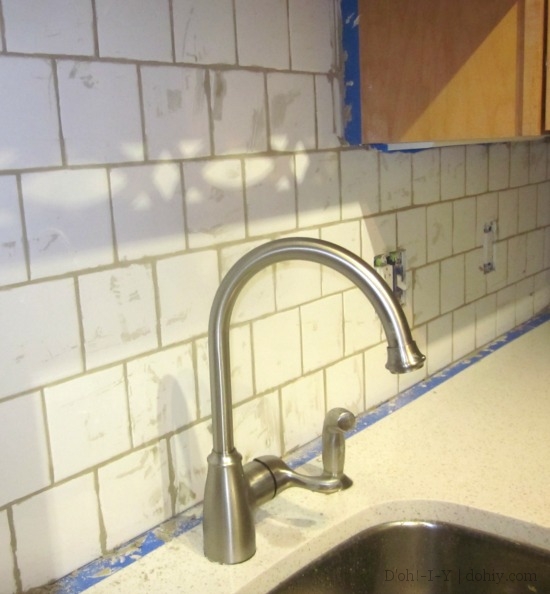 And here’s an area after I wore out my arm violently caressing the joints with a grout sponge: 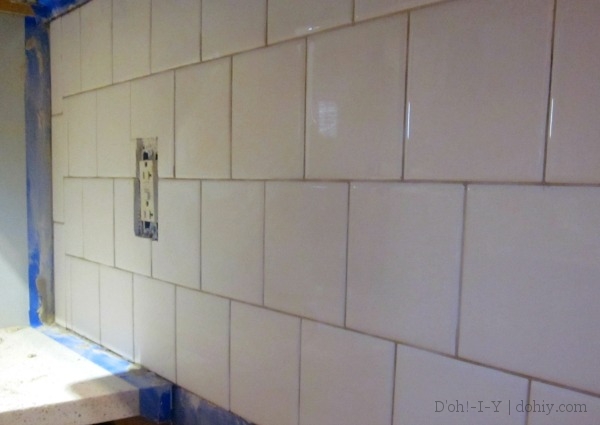 I still need to clean this up, remove the grout haze, and seal the grout seams. I also intend to tile the window seat area, but we need to consider a possible rework to the seat/lid portion. So once I’ve sealed this grout, the tiling will be DONE. Done enough, anyway.