Wait. I can’t start without music to inspire me. Why is Bach next to Muddy Waters? That’s my problem–I’ve got to get these CDs organized. . . . There! Finished. Now, if I win just two more games of online Boggle, I’ll be ready to start.

I was going to slipcover the sofa. I tested out a range of possible fabrics and I repaired the frame, so it was time to start sewing! But then I talked to my mother (a sewing genius) about the fabric choice, and re-thought the cotton duck. Mom recommended a heavier fabric with some synthetic content; it would hold its shape and color better. I ordered some more swatches of fabric and tested those, finally settling on a microsuede that doesn’t look like microsuede. 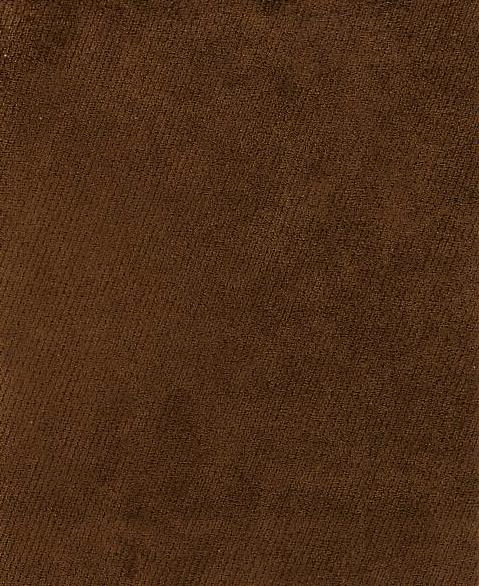 It was back-ordered, so I had to wait. And then I got busy with other things. But the real problem was, I was scared I was going to screw it up. I have some basic sewing skills, but nothing fancy. And honestly, even though we own the D’OH! in our blog title, it’s intimidating to have a project to be posted that might not work out well.

Once I got started, though, I felt better. And look, I have the cushions done! 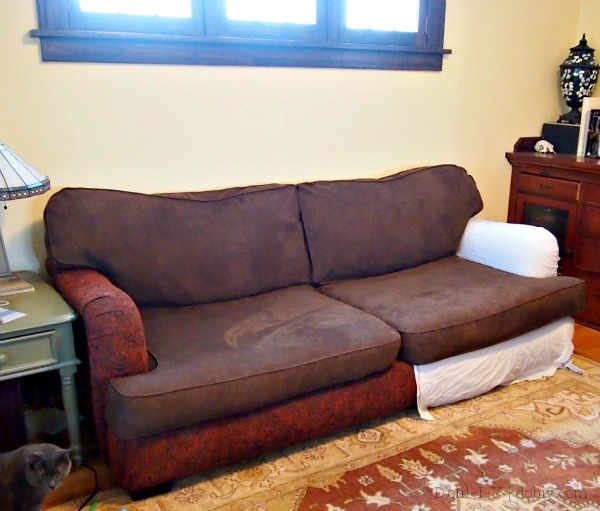 They aren’t anywhere near perfect, but they are much better than I was expecting. My sewing skills are really basic, so if I can do this, so can you (assuming you, too, have basic sewing skills).

There are a number of excellent tutorials about sewing boxed and zippered cushions. I reviewed all of these (and more) while working up the nerve to start sewing.

I can’t improve on these posts from an instructional standpoint, but I can offer some tips to fellow wimpy sewers. If your skills are in the “basic” zone, here are a few things (other than working slowly and carefully) that might help you as you work through these tutorials.

1. Use pre-made piping/welting. Last thing I need is another step! Making your own piping is not that hard, but ready-to-use piping is cheap and easy (and available in a ton of colors). It’s a good option for less-fabulous sewers. 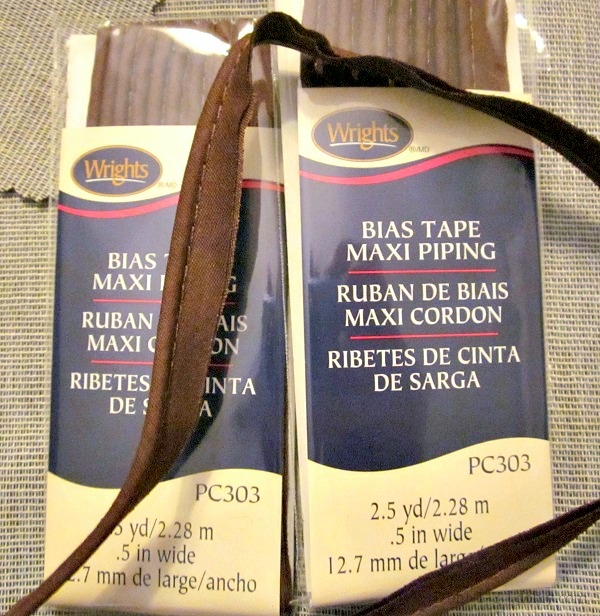 If you are replacing zippered cushions, another time and money saver is re-using the zippers that are in the old cushion covers. If you manage to zip the pull right off the end of the zipper (twice!) as I did, use one of these techniques to put it back together (I used the screwdriver method both times).

2. Use heavy-duty needles and thread. Typically, I start a sewing project with whatever needle is in the machine and with basic thread (UK: cotton). This time, I actually went out especially to pick up heavy-duty needles and thread. Because it’s upholstery! Lots of wear! Heavy fabric! It goes so much better with a needle and thread that will stand up to the task. (Also, buy more thread than you think you’re going to need. I bought five spools, and I’m going to use most of it, maybe all.)

3. Buy a seam ripper. I tore down the existing sofa cushions to make patterns for the slipcovers. I’ve never had a seam ripper — I just used a razor blade or a box cutter. On a lark, I picked up a seam ripper, and it’s completely worth the two bucks. It’s just the right tool for the task.

4. Load up several bobbins before you start. Bobbins run out quicker than spools, and once you have some forward momentum, you don’t want to take time out to thread bobbins. When you first sit down, whip up three or four full bobbins that you can swap out quickly.

5. If you have to thread a bobbin after threading the needle, cheat. I hate unthreading the machine so I can thread a bobbin. Maybe technically it’s not necessary to unthread, but bobbin-winding always screws up my threading. (Remember: I’m not great at this!) Fortunately, most machines are cheatable, assuming you have multiple spools of thread. Take off the sewing spool and set it aside (carefully) without unthreading the machine. Put your bobbin-threading spool on the machine, but instead of running it through the machine to thread the bobbin, run it through your fingers.

Clear? No? Here’s a picture. 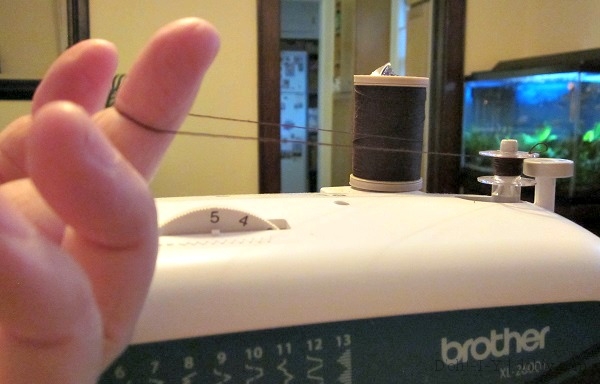 Move your fingers up and down as you thread the bobbin to keep it winding evenly (it takes very little movement). When the bobbin’s full, just switch spools again, and you’re good to go without rethreading.

6. Make a tiny paper version of your pattern pieces. I had four total cushions: two back and two seat. My sofa has “T” seat cushions and fitted back cushions, meaning that one side on each cushion has a notch out of it. I only ripped one back and one seat cushion, and turned or inverted the pieces as necessary for the remaining parts. To help keep track of where the notch was supposed to be in each case, I made a small paper reference for the finished piece I was cutting, marking which side was “out” and which side was notched. I set it alongside the fabric before cutting as a double-check so I didn’t cut wrong side up or facing the wrong direction. 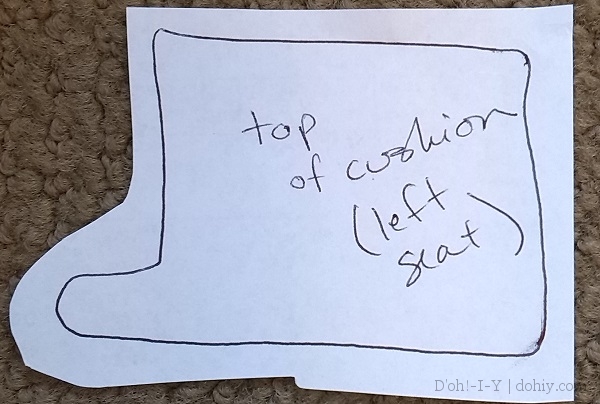 This little crutch saved me from considerable recutting (and from buying more fabric).

7. Make a spacer to keep your sides on track. When I was cutting out the narrow side pieces, I used the existing piece to make a true-to-size template. This piece of cardboard is the width of the existing finished piece, less the welt. (The “x 106” is the length of the piece in inches, and KEEP is so I didn’t throw it away in a neatening frenzy.) 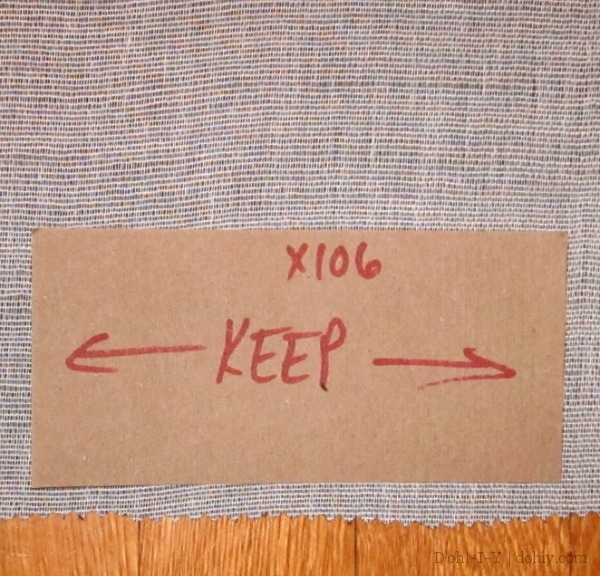 As I was attaching the piping, I used the template to check the spacing and to keep the sides parallel. This trick reduced the amount of pinning I had to do, and helped keep everything on track. In the next picture, for instance, the template showed me I needed to reduce the depth of the hem on the piped edge slightly as I sewed. 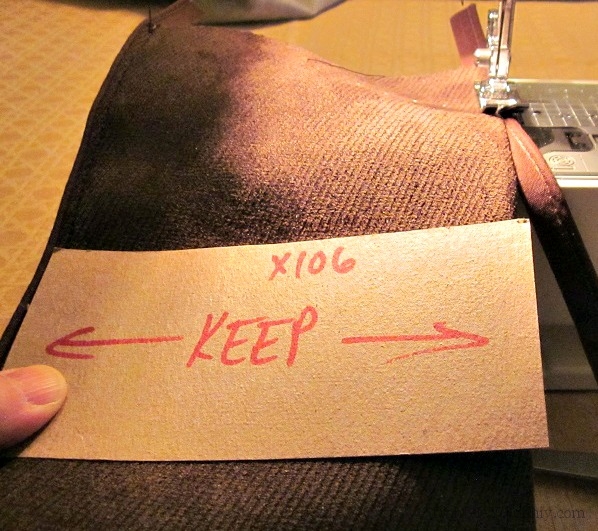 Checking the template from time to time kept me on the more or less straight and narrow.

8. Choose your battles. Not a single one of my zipper installations looks professional, but I don’t care! The zippers are functional, the seams are secure, and you can’t bloody well SEE them. On the other hand, I had trouble matching up the turns on one of the back cushions, causing puckers and general weirdness. I ripped it out and resewed it. Twice. 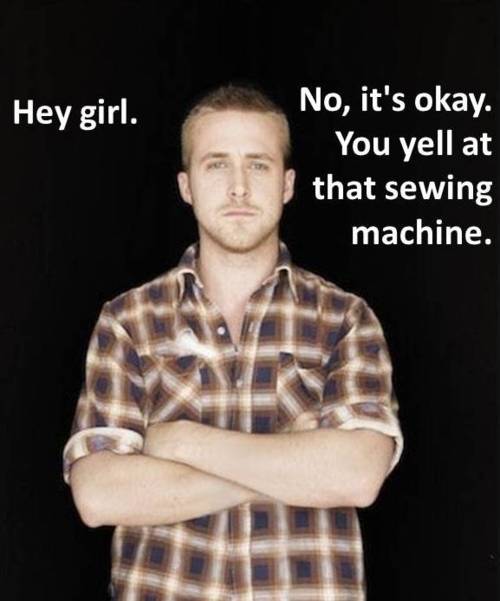 It was worth the extra effort because the mistake in alignment ruined the line of the cushion. The zipper? No effect on appearance, so functional is good enough.

Finally, some progress! This weekend, I hope to finish the rest of the job.

2 Responses to This Old Couch: Now a Bit Older