Pinterest. Is that place kind of addictive or what? I enjoy browsing and pinning very much, and I get a huge kick out of people pinning our projects. It’s a brilliant idea, and I’m all for the site’s creative team making a ton of money.

Having said that…some of the recurring projects do give me pause. This very funny Mental Floss video (nominally about “life hacks” but I think I’ve seen every one of them on Pinterest) scores 30 different ideas, including many big-time fails.

My favorite line: “The failiest pass of all time!”

Here are three frequently pinned projects that tend to stop me in my tracks when I’m looking at my Pinterest feed. They all work just fine, but…

Sometimes drywalling or paneling can thicken a wall surface, which can mean that existing electrical boxes stop short of the new wall surface. Pinterest users suggest stringing a nut on the fastening screws between the box and the receptacle/switch to bring said receptacle/switch out to the surface of the wall. This does work, but it means that the receptacle or the switch is now partway out of its box behind the cover plate.

Now, ok, this is unlikely to cause a fire or to shock anyone, but it could. There’s a reason that the outlet is contained in a box. This idea defeats the keep-your-electrical-connections-enclosed aspect of building/fire codes and common sense. Plus, this hack is not substantially easier than the actual fix. All you need is a box extender and about two minutes.

Measure the boxes you want to extend and drop in at the hardware store. Chances are, your boxes are all the same size and you can pick up a pack of extenders. Either way, they are cheap. Then you just turn off the circuit, unscrew the receptacle or switch, stick the extender in and fasten everything back together. Here’s a nice man to show you how easy it is:

This is one of those times it’s just as easy (but safer) to do it right.

This works pretty well initially, but there’s a reason that ancient histories say that armies salted the earth to punish their enemies. Salt is very soluble in water, so any weed that gets salted is not necessarily the end of it. Salt applied to a plant can hurt desirable plants as water moves on and through the soil. 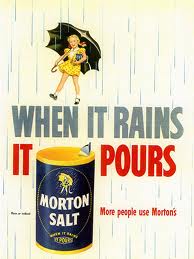 When it rains, it dissolves and drifts onto other plants.

The other thing here is that weeds are successful because they can regenerate well from seeds or roots. Salt’s solubility also means that it’s not a long-term solution for weeds. Once the salt is gone, weeds can come back.

The best solution is pulling the entire weed, but that’s not often practical. Here’s where modern corporate research can help — glyphosate doesn’t travel like salt because it’s designed to dissipate in the environment without harming other organisms, which is why it’s favored even by university extension programs. Plus, the amount of salt some pinners recommend would cost more than weed killer!

3.  Pallets Repurposed for EVERYTHING

We have done a little pallet repurposing in our day. Our compost enclosures are made from pallets.

But I can’t bring myself to take pallets indoors. Earlier in my working life, I worked for a freight company, so I’ve seen a lot of pallets taking abuse. Besides being made of splintery, rough wood that wasn’t good enough to be low-grade lumber, pallets have some other extra-special features.

If you’re cool with all that, then there are some cute projects out there. But since I can’t unsee the things I’ve seen, I’m probably not going do anything like this: 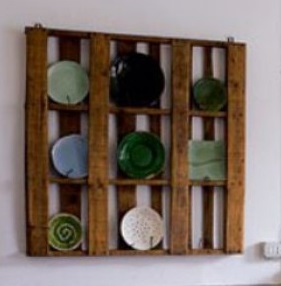 Dishes stored on a pallet (via)

I can’t look at that without thinking about that last item in my list! There’s other reclaimable wood out there with fewer issues.

I love the spirit of Pinterest, so I would not want to be all, “YOU’RE DOING IT WRONG!” there or on anyone’s blog. I’m sure there are many things I blog about that cause readers to smack their foreheads in frustration. As Mental Floss, Pinstrosity and others point out, not every project is a great idea. The three things highlighted here all work, but a little more info might make a good project a huge WIN.