Ned: How can we sabotage his labor of love?
Homer: I dunno. Gasoline, acid, I got some stuff in the trunk. 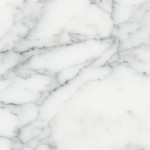 One of our goals for 2013 is new countertops in the kitchen. We have laminate that we installed about ten years ago, and it suffered a bit when we rented out the house. We’ve looked into several options, and it’s probably down to quartz, wood or marble. Despite all the naysayers, I’m kind of sweet on the idea of white marble tops. But there are a LOT of naysayers, so I’m hesitant, especially since I am a messy, messy cook.

I keep returning to an oft-cited post at Petch House on marble countertops. In the Petch House “acid test,” Greg sealed half of a piece of marble, keeping the unsealed side as a control. He then subjected both sides to tomato sauce, limes and red wine. The marble performed surprisingly well regardless of sealing.

But the Petch House test didn’t take into account the messiness that is me in the kitchen. That test left a mess on the marble for as long as “over an hour” — an hour! I can easily imagine cooking for a party and leaving something standing on the counter for the duration of the event. Accidentally! But for longer than an hour.

I decided to do my own test for the worst-case scenario: if I (accidentally) left something horrible on unsealed marble for a loooong time, would I be able to clean it up? 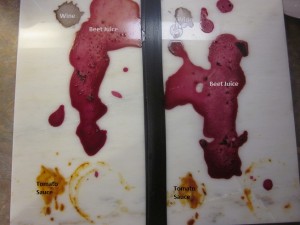 I applied Cafe D’oh’s most common special ingredients to a White Statuary tile: pickled beet juice, red wine and tomato sauce. I split the mess semi-evenly (I divided the tile with electrical tape in honor of the Petch test). I smooshed it all around a bit and then left it…for 30 hours. By which point it achieved the crusty, disgusting state you see above.

The wine came off with a quick scrub, but the beet juice (and to a much lesser extent the tomato sauce) left a colored shadow on the tile. 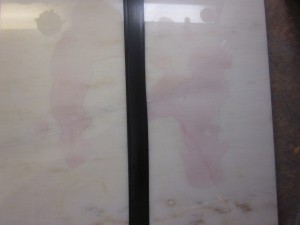 Other than the pink shadows, this is a pretty good picture of etching on a polished finish.

To deal with the staining, I used two products, chosen because of their ubiquity (to go along with the “worst-case scenario” theme). On the left side, I used a powdered oxygen-based cleaner (most common name brand is Oxy-Clean, although I used a generic version). I added enough water to make a paste and slathered it on the discolored areas. I draped a damp dishcloth over it to keep the paste moist and walked away. There was significant progress in 20 minutes, and the stain was gone in 90 minutes.

On the right side, I used regular bleach (also generic). A puddle left on the surface for 20 minutes reduced the color only very slightly. I soaked some kitchen toweling with bleach, set it on the stain and left it overnight. Plain bleach left for eight hours took out the discoloration, even in a crack.

So both methods removed the discoloration, leaving the chemical etching you would expect leaving vinegar-based beet juice for so long. 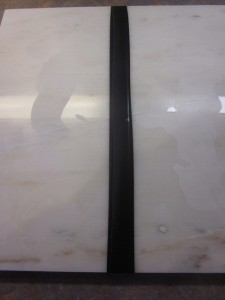 What’s harder to photograph, though, is the impact of the powdered oxygen bleach. It seemed to accelerate the etching on the left side, even though it was on a much shorter time than the regular bleach. 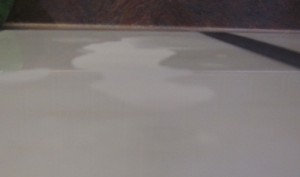 Although it didn’t change the finish other places it touched, the oxygen cleaner did seem to reinforce the etching that it covered. The finish on the etched areas was much more pronounced than the etching on the plain bleach side, despite having originally been caused by the same ingredients.

I was pleased with the results from the regular bleach. I feel confident that I could remove a stain even if I failed to seal the marble. Or failed to maintain any sort of food hygiene whatsoever!