Marge: I can’t count how many times your father’s done something crazy like this.
Lisa: It’s 300, Mom.
Marge: I could have sworn it was 302.

We’re sort of in the market for a new countertop. I say “sort of” because we’ve been kicking the idea around since 2006. Don’t blink — things move fast around here! Our existing laminate counters (UK: worktops) took a beating when we had tenants in the house, and we’d like to replace them with something long-term. We only have about 21 square feet (1.95 square meters–that does sound small!) of counter space; on a square-foot basis, this must be our most drawn-out house decision of all time. 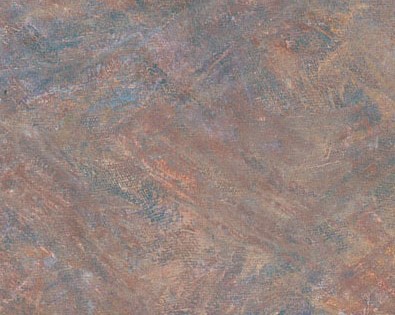 I’ve got nothing against laminate! It’s homey and durable, scrubbable and generally lovable. I would go for laminate in a heartbeat if I could find any that I liked or that I thought was appropriately priced.

As you’ll be able to discern from the laminate we have (left), I prefer laminate to be what it is. I don’t really care for the laminate that is trying too hard to look like something else, be it stone or metal or wood. Laminate makers, however, seem hell-bent on either replicating something or being self-consciously retro. I do like a few options from the Wilsonart HD line — some of them are less stone-like but still have pattern and depth. But for cripe’s sake, they are proud of it! For my money, it’s too high-priced for plastic bonded to particle board.

With laminate out of the picture (probably), we considered and rejected many other options — the granites we like are expensive, soapstone is too dark, solid surface and quartz are too uniform (although we almost bought quartz a couple of years ago, so it’s not completely ruled out), tile is too grouty. Given all that, there are three major finalists under consideration.

I have a big ol’ crush on dark wood countertops. If I were in high school, wood counters would have long hair and wear a lot of Drakkar Noir. Wood would totally be in a band, and drive a restoration project 1968 Camaro. 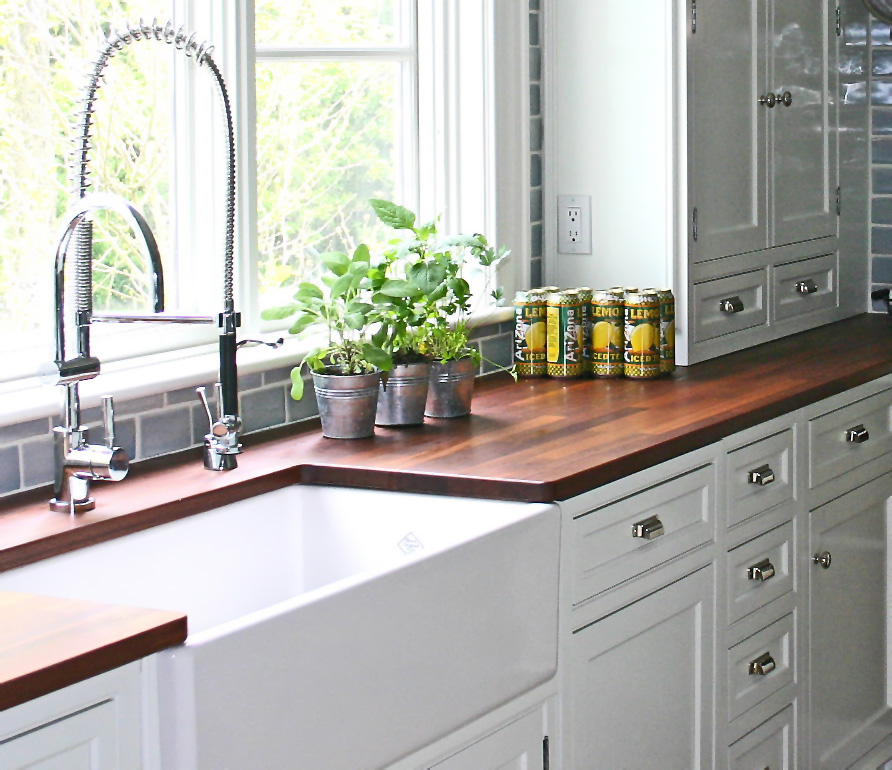 I love it with an ogee (routed) edge as well. 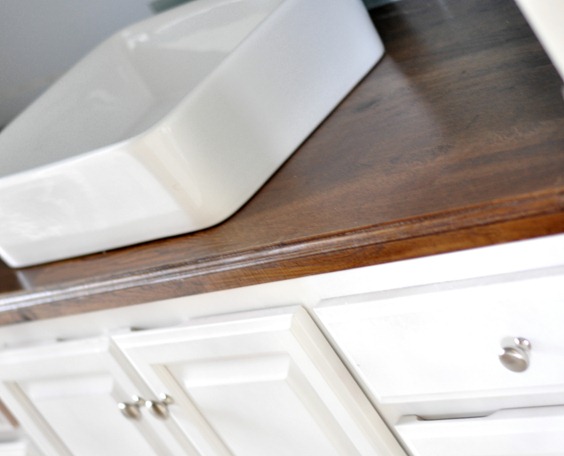 Ok, yes, this is a bathroom, but look at the edge! (via Centsational Girl)

I like the dark wood–walnut or another wood stained dark–because our cabinets are a light wood and so is the floor. If we go with wood, the countertops need to be a different color or it’s going to look weirdly same-y. Also, if we stain we could use the countertop to pick up the deep woodwork color that runs through the house. I bookmarked this tutorial about staining and sealing butcherblock years ago in case we went that direction.

If wood were my high school crush, then zinc was that young comparative lit professor. He had incredible blue eyes, had lived in Europe, and was sooo deep. Years later, I’d realize that zinc was stoned in class most of the time and that was probably why zinc didn’t get tenure. 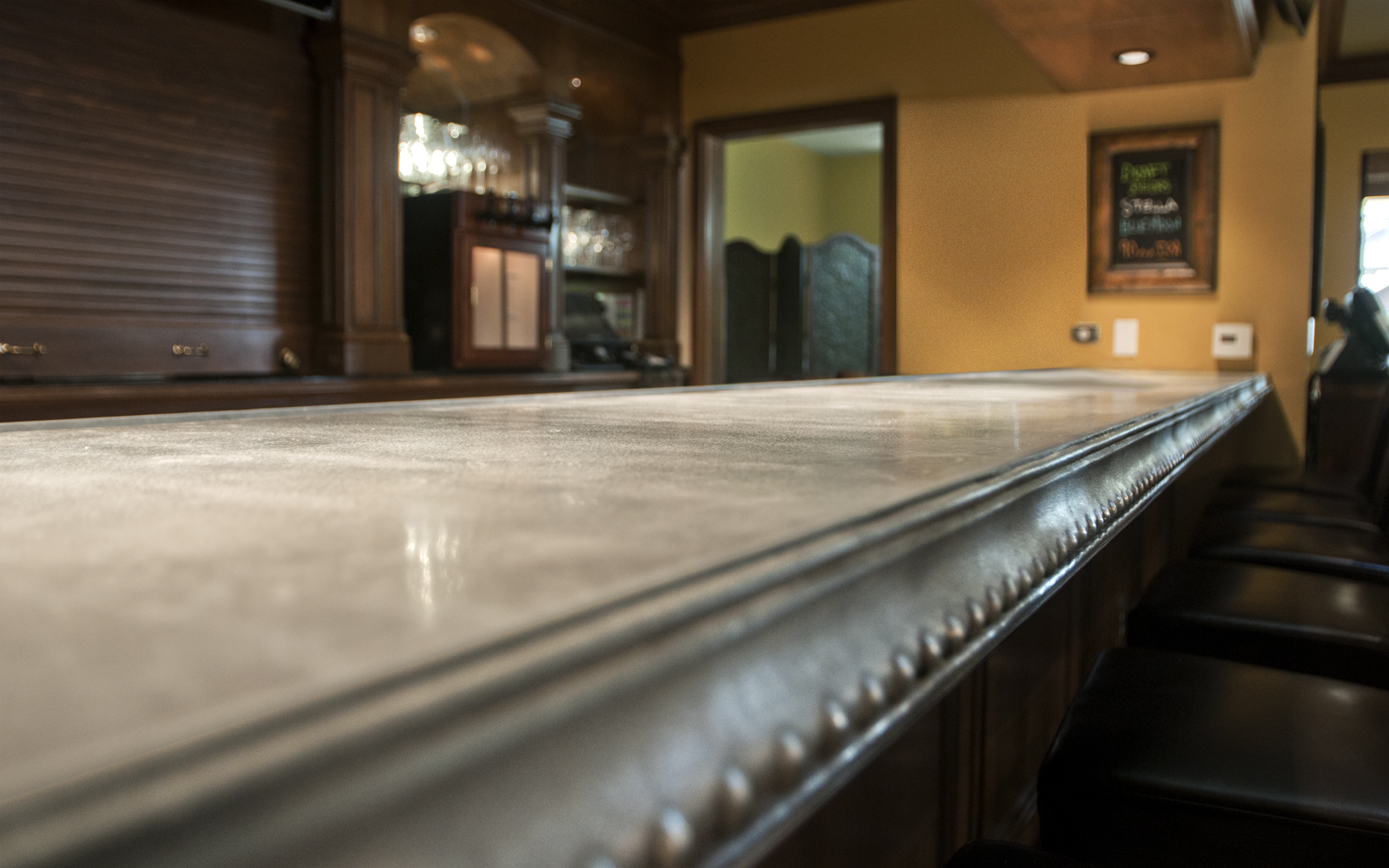 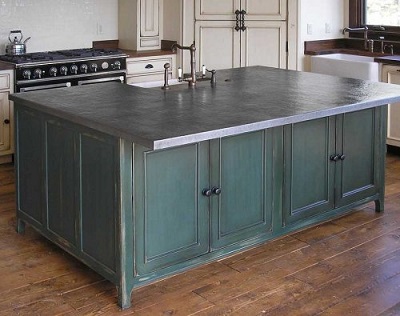 Zinc is one of those “living surfaces” designers talk about. It’s a reactive metal, so over time scratches and etches give it a soft-focus finish. But it can also be pre-aged or waxed to give it a more uniform look.

Oh, marble. I place it on a pedestal made of a lesser stone. Marble is my daydream countertop. In the crush pantheon, marble is…

Understated. Timeless. Veiny! Gorgeous, but even better looking with a bit of age. 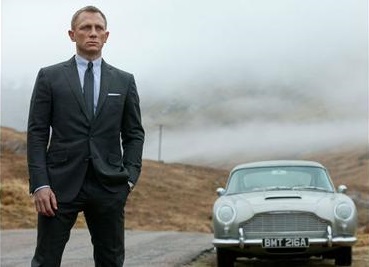 All other thing being equal, my vote would be for marble. People are fond of wringing their hands over marble — it etches! It’s fragile! It’s soft! To quote Greg from The Petch House:

The marble vs. granite (and everything else) debate will rage as long as there’s an internet, but if you are ok with patina (and if you live in an old house, it’s likely you are), marble is a good option. Petch House’s famous staining test (and my less-famous marble cleaning test) show what can happen, and it’s nothing drastic. Because it’s a rock. And what a rock! 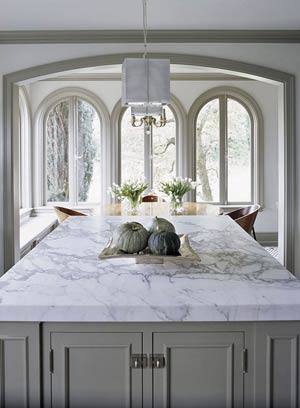 For many months, I’ve played around with the idea of finding salvage marble somewhere and cutting it ourselves (I’m told it can be done with the right wet saw), but it seems ALL the stars would have to align for that to happen. There are also large-format marble tiles, but there’s still a grout issue. Slab remnants (since our kitchen is small) would seem to be our best option.

I would love any thoughts on any of these options, particularly if you have (or had) any of these counters. I’ll let y’all know about our decision-making progress, and I promise not to use the verb “to patinate” quite so often in future updates.

UPDATE: We chose countertops…but surprisingly not anything on this short list.

2 Responses to Kitchen Countertops: Let Me Count the Options