Right as rain! Or, as we say around here, “left” as rain!

I originally named this post “What Hippies Don’t Want You to Know About Rain Barrels” but I didn’t want to attract real-life Cartman types. 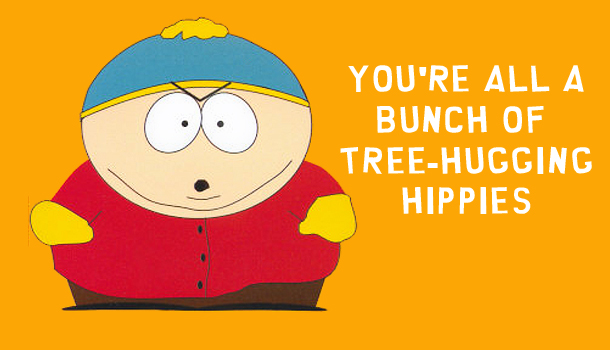 The Kev and I certainly have some hippified leanings. Our rain barrels are part of that — we are harvesting the natural water from the bountiful sky to provide for the flowers that sustain the birds and butterflies! It’s all part of the beautiful, ever-turning wheel of the universe! 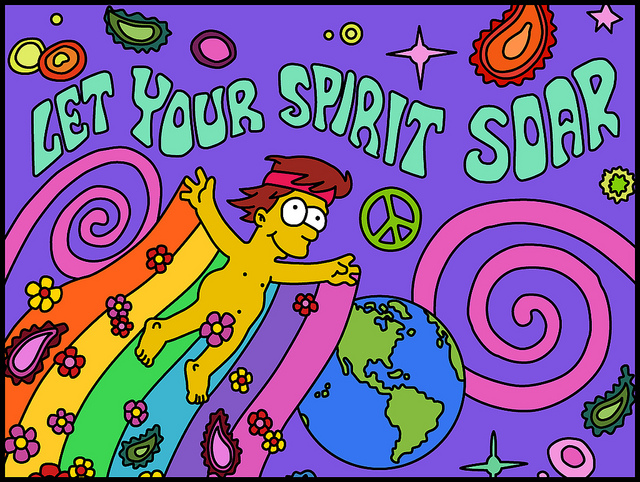 Until you realize…that water ain’t gonna move itself.

Just because you save up 55 gallons of water in a barrel doesn’t mean the plants that need it are anywhere nearby. Commercially produced rain barrels come with a fairly short hose for filling up watering cans and buckets to take the water to the plants. 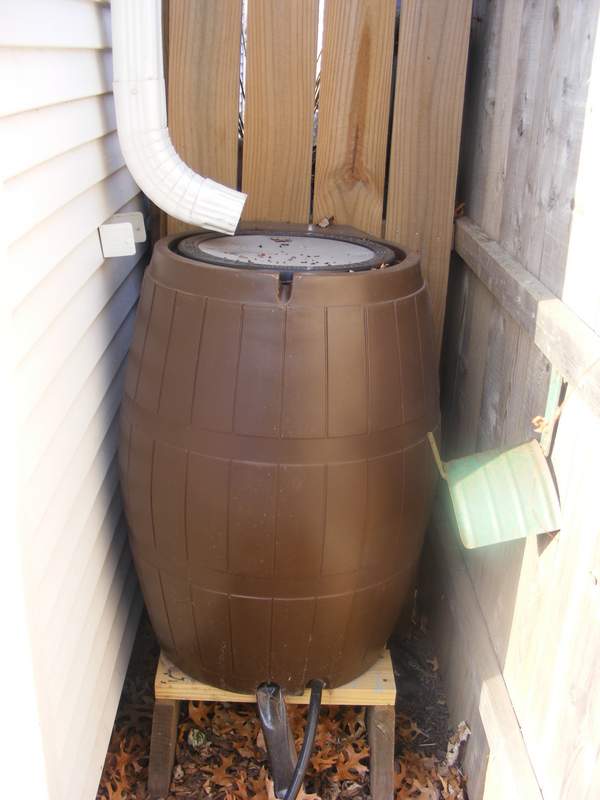 One of ours. The supply hose (the smaller hose to the right) is only as long as the barrel is tall.

Gardeners often want to set up a rain barrel to provide trickle irrigation to a sizable area by hooking up a longer line. I asked my sister-in-law Mary (a professional landscaper and lifelong gardener) if she thought this technique could work in any sort of reliable way. 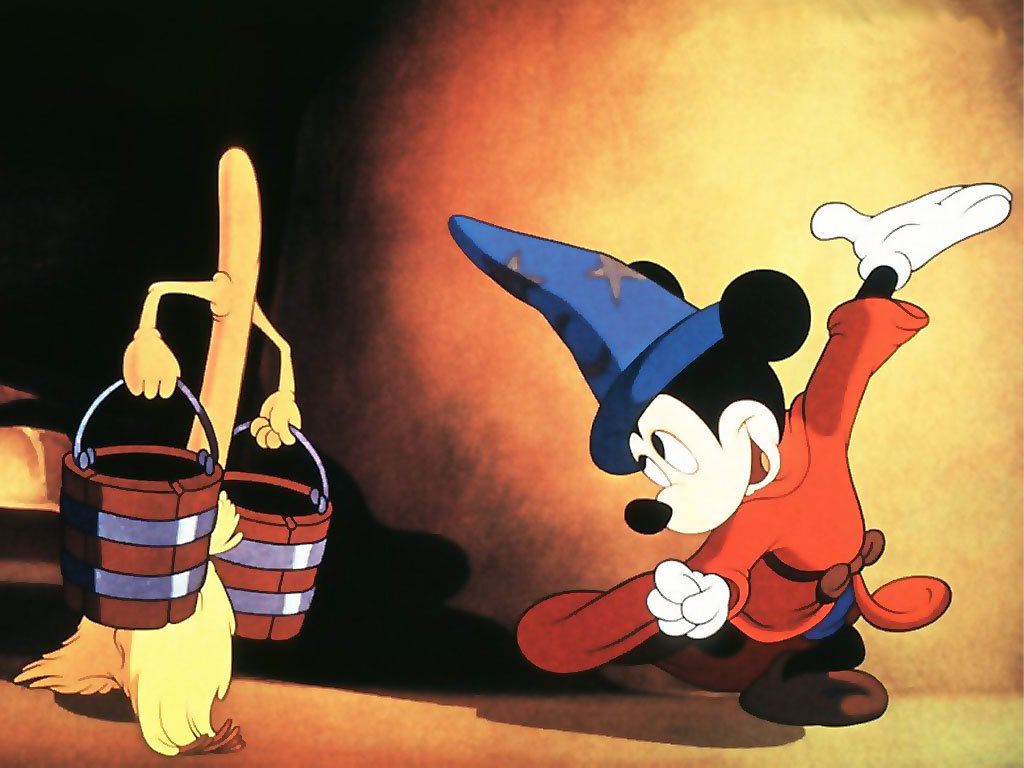 Rain barrels are generally elevated slightly to help maintain pressure when you are emptying the barrel into buckets and watering cans. A single, elevated barrel will have good pressure for at least the first half of a full barrel — unscientifically, it seems about like a bathroom faucet on nearly full. But that goes by quickly, leaving diminishing pressure for the second half of the supply. (You can add a solar-powered pump, but that has its own prerequisites, including “is my rain barrel in the sun?”)

Using a trickle hose or series of sprinklers, the pressure needs to be constant to provide water to the end of the run (as it is when supplied from an outside faucet). I contacted my engineer brother (a/k/a Angry Dad) for a formula to show the hows and whys. He replied:

Yeah, it has to do with internal friction of the pipe, liquid pressure/density and some other factors. You would need a reference book to get the hose information.

That’s more work than I’m going to do for y’all, sorry. You’ll just have to trust my experience when I say that barrel water runs out fast and doesn’t have enough pressure to make it all the way to the end of the run for long.

(Some folks link a series of barrels from a single downspout. This technique can provide more water for gravity-driven irrigation. The bigger the cache, the better, but there are safety issues with large cisterns, and aesthetic reasons to avoid a stack of barrels next to your house. I’m not THAT much of a hippie.)

Ok, why am I being such a harpy about rain barrels when I claim to like and have several of them? Because it’s a shame to have a rain barrel and just leave it to breed mosquitoes. You should know what you are getting yourself into, which is something like this: 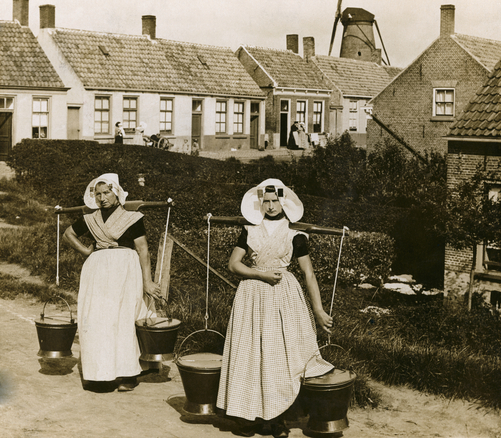 Rain barrels will turn you and your family into stylish Dutch women.

Here’s what I do:

Rotate watering cans. I fill up one large watering can/bucket, then I leave the hose open in the next watering can/bucket to fill up while I schlep the first container to the targeted planting. Generally, I return to the barrel about the time the next container is full, and then I swap them. Schlep, swap, schlep, swap. Fortunately, you’re probably only doing a few runs each time, because that could get old in a hurry! I try to put my container plants on a geographically logical rotation so that I don’t need to do too many at a time.

Be strategic about your plantings. If you have something that needs a fair bit of water (I’m looking at you, Endless Summer hydrangea), think about planting it relatively near a rain barrel. My hydrangeas and I get on much better since I moved them closer to the barrel. Watering them isn’t a panic-driven chore anymore. 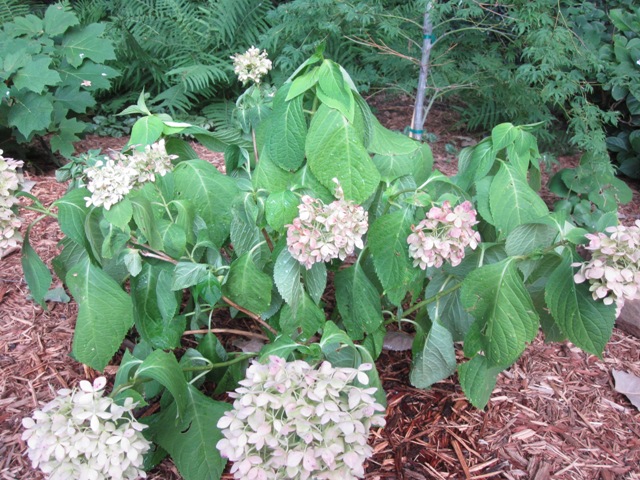 Land’s sake! I’m a hyDRANGea, and I simply MUST droop! Do bring me a bucket of water. (via)

Choose watering cans and buckets that are comfortable to carry. I had a watering can that was really cute, but it made a crease in my hand every time I carried it. Now I have a cheap two-gallon unit made from recycled plastic that adds very little weight to the endeavor. I alternate that with whatever milk jugs I am rinsing for eventual winter sowing use, or with a two- to three-gallon bucket.

Rain barrels are a smart idea — they save water, reduce stormwater run-off, and maximize a natural resource — plus, they provide a HECK OF A WORK-OUT. Embrace all the benefits of the barrel!

(If you already have barrels, don’t forget to prep them for winter soon.)

This entry was posted in D'oh!, Outdoor Building Projects, Repair & Maintenance, Yard & Garden and tagged how to use rain barrels, rain barrels for irrigation, using rain barrels. Bookmark the permalink.