There’s Deck Screws in the Jar-O

After doing a few DIY projects, you’ll probably find that you have a small collection of left-over screws, nails, assorted fasteners and pieces of hardware. Throwing them away is not an option, so you stick them on a shelf or in a drawer in the basement or the garage. Eventually, you can end up with enough fasteners, brackets, hinges, etc., to open a small hardware store.

I made a few halfhearted attempts at organizing our supplies. I even bought a plastic cabinet with little drawers. But it wasn’t a very workable system. I’d spend a lot of time searching through assorted boxes and tins looking for the right screw or nail. More often than not, I’d give up and run to the hardware store.

Clearly, I had to get properly organized. I began researching commercially available storage systems. Those racks that have removable bins were quite appealing. You know, like the one my nephew uses to store his giant Lego collection. This storage rack with bins from Harbor Freight would store a small part of my nephew’s Lego collection.

With this kind of small-part storage system, it’s easy to see the contents of the bins. There are quite a few choices for this type of storage system. They come in all shapes and sizes, with one thing in common: they all cost way more than I was willing to spend.

So, I began to think about making my own rack with containers. I liked the idea of clear containers, because it’s easy to see the contents of each container.

A clear container from Menards

I decided that the containers for my system should be transparent. I had a look around the house. It so happens that, being British, I like pickled beetroot. The pickled beets come in small glass jars that are 4½” high and 3″ in diameter. 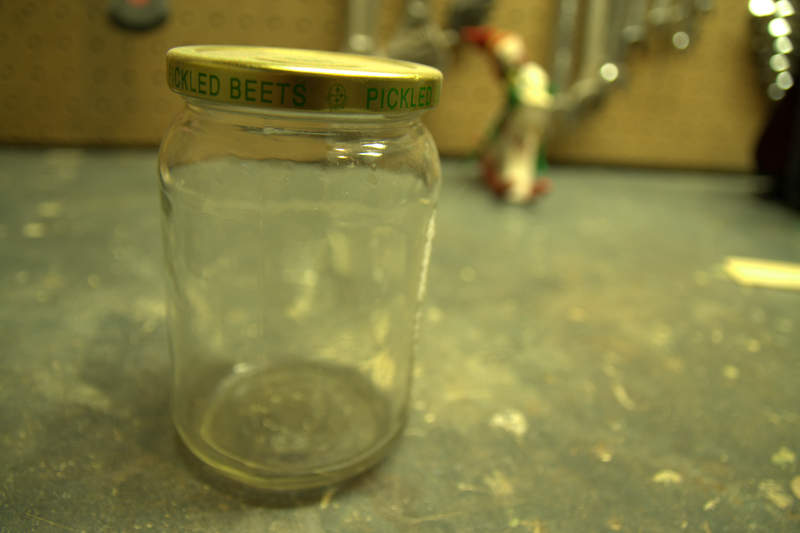 One of the pickled beet jars that I collected to make a storage system.

I’d been throwing these jars into the recycling for years, but now I began collecting them. I wanted all the jars to be the same size, so they would all fit onto the rack that I had yet to make.

Over the course of about a year, every time I finished a jar of beets, I would clean the jar and lid, and put them into a box in the basement.

My original thinking was that the lids would be attached to a wall, or to the underside of a ‘shelf’, so that the jars could be removed by unscrewing them from the lids. But in the end, I decided to go with the simplest method, and stand them on shelves. 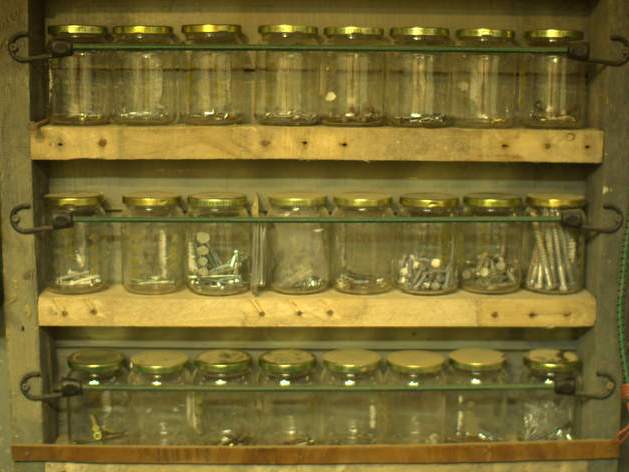 Pickle jars all in a row.

The shelves are 3″ wide, the same as the jars. I wanted the shelves to have lips to stop jars being knocked off. After making one lip, I wasn’t satisfied with how effective it might be. So, I used bungee cords stretched in front of the rows of jars. This works very well. The Bungees stretch, making it easy to remove and replace jars. 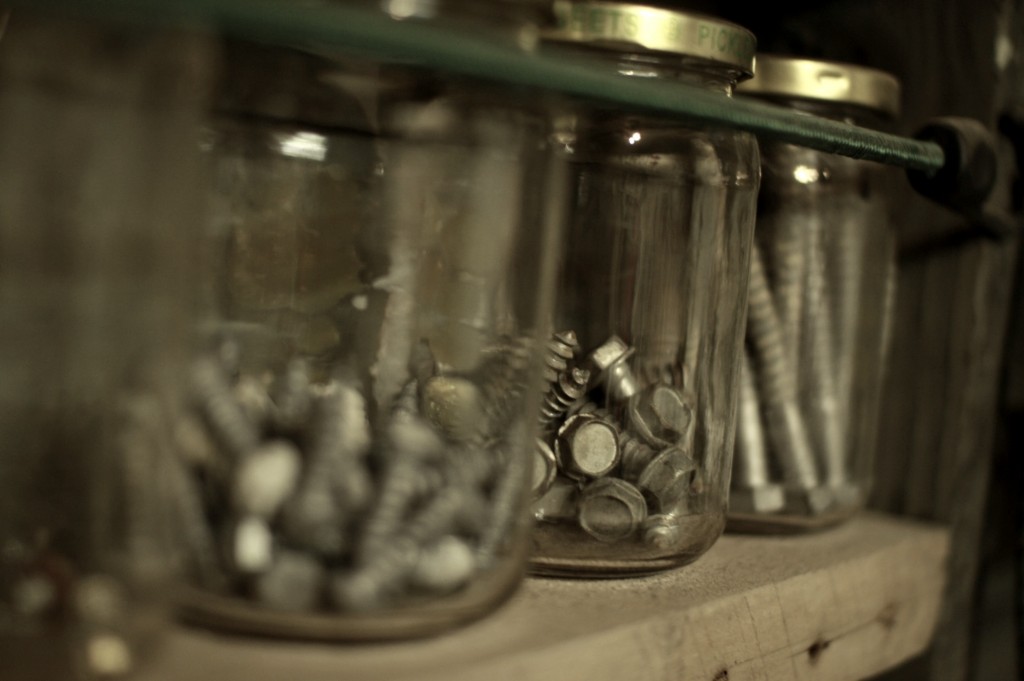 So that’s my system. It cost me nothing, apart from a year of eating beets (possibly a price too high for some). It works well, and I can easily find the right screw now; or, at least know for sure that I don’t have the right screw before I go to the store. Also, the jars are handy for carrying screws and nails to wherever I’m working.