Bart: Dad, you’re giving in to mob mentality.
Homer: No, I’m not–I’m hopping on the bandwagon. Come on, son, get with the winning team!

We ordered some countertops. Then I had to have a lie-down, because a major decision every six or seven years really takes it out of me.

We’d been through a stack of options, and created a short list of wood, zinc, and marble. We tried out a wood look, and decided it didn’t work. Zinc was also knocked out as aesthetically wrong for our tiny kitchen. Despite testing how marble would wear around messy cooks, my dream surface was eliminated as well. It turned out to be undoable with slab remnants, meaning a very high per-square-foot cost for buying a whole slab. We did consider marble mini-slabs, but we didn’t want the grout lines. We did more research, revised the list, and maybe did a bit more research.

Then Menards had a sale, and we ordered quartz.

Riverstone Quartz is Menards own brand of quartz surface. After our faux wood experiment, we settled on a light color and ordered “Cotton.” It’s almost entirely white with clear flecks.

White quartz is a nice, crisp look, and it will bounce light around the room. 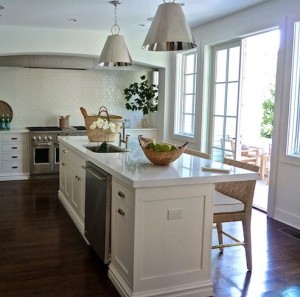 During the recent kitchen sale, Menards offered this material starting at $30/square foot, plus charges for sink and faucet cut-outs. It’s pretty affordable at other times, too, but it’s worth waiting for a sale–they have them several times a year. You’ll need to provide double-checked measurements for each piece of counter, plus the position of the sink (measure for the midline of the sink you will use) and any cut-outs (faucet, drop-in range, extra sinks, etc.). You can buy a sink as part of the transaction, or provide the model and brand.

The Cotton pattern was one of the ones at the opening price; some other patterns were more expensive, but fortunately, we wanted the white. It’s an unbeatable deal, but installation is not included. Here are the other ups and downs for quartz counters:

We provided our measurements, and the factory will send us a vinyl template that we can roll out over our existing tops to check that everything is right before they proceed to fabrication. After that, the finished surfaces will be delivered to our local Menards in about three weeks. We’ll pull out the old counters and level everything before the heavy lifting begins.

6 Responses to Finally, A Decision