Cat Cozy for a Cozy Cat

Our cat Mayya likes to snuggle up under blankets. She will ask us to lift up the covers for her to burrow in. More amusingly, she’ll try to do it herself, which often doesn’t work very well. Sometimes we tuck her under a blanket at bedtime, but if she gets up in the night, she’s out of luck. 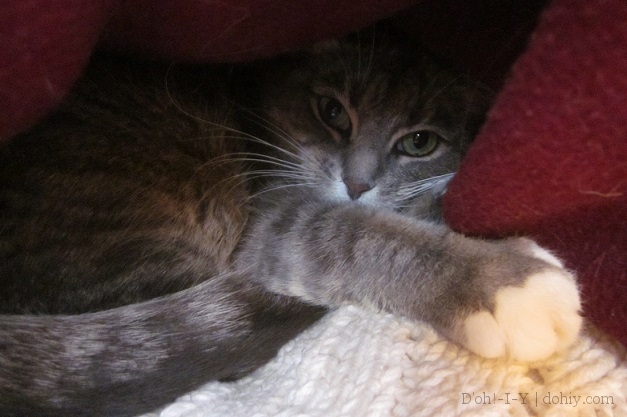 Peeking under the blanket at Mayya

Kevin thought it would be nice if we could make her a cat bed that she could insert herself that would still give her that “under the blanket” feeling. It’s not enough to be in an enclosed space, you see — she wants to be enveloped. 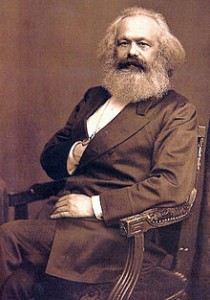 Karl Marx: hiding a cat in his jacket since 1848

I started this project some months ago — I had an ill-fitting sweatshirt (is there any other kind?) that I was going to use. But I never got around to it, and I eventually donated that garment to Goodwill. When I decided to mess around with the idea again today, I went to Goodwill and bought a sweatshirt. This is probably the sort of thing Marx envisioned when he said that capitalism would eat itself.

But this sweatshirt is particularly smooshy, and just the type of fabric that Mayya likes to knead. In fact, as soon as I set it down to take a picture of it, she came to claim it as her own. 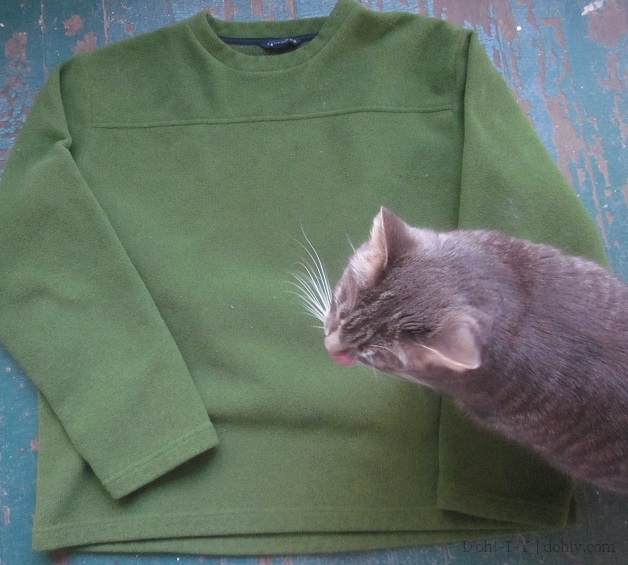 After reclaiming the sweatshirt from the cat, I turned it inside-out and cut off most of the sleeves, so I had a big square. Then I sewed up the bottom and the armholes so I had a big smooshy bag with just the neck open. 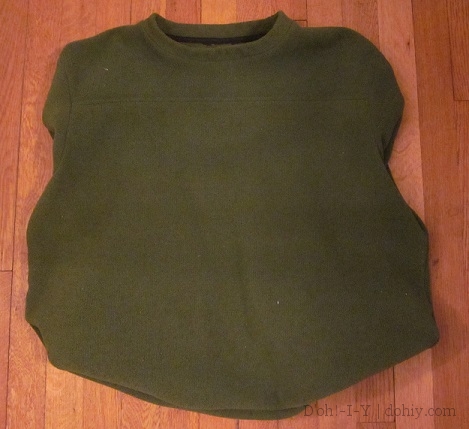 Not a particularly fabulous craft project

Then I had a brilliant idea. I had a garden drain coupler that I knew was big enough for Mayya to get through. I thought I’d use that to give the opening some rigidity so she could nose through it easier. 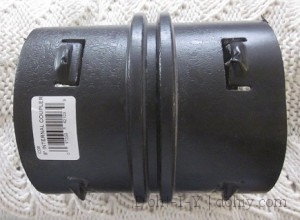 I cut the coupler down to just the most rigid part, and I hand-sewed that into fabric from one of the sleeves. Then, I hand-sewed the upholstered ring into the neck opening. 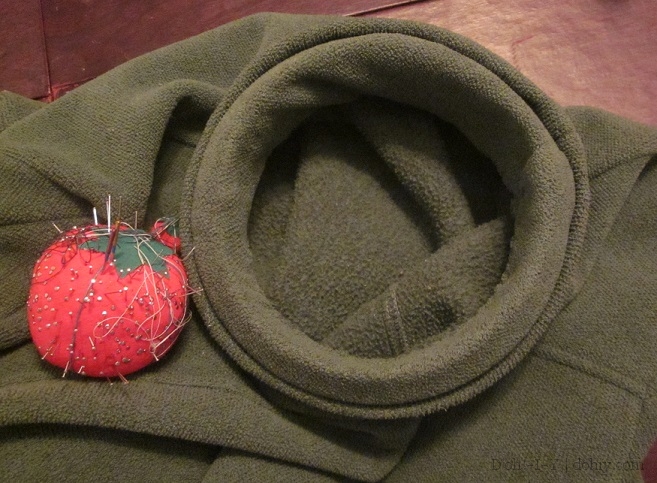 We summoned Mayya. She was very interested in trying it out (especially after we chucked a couple of treats inside). There was just one problem… 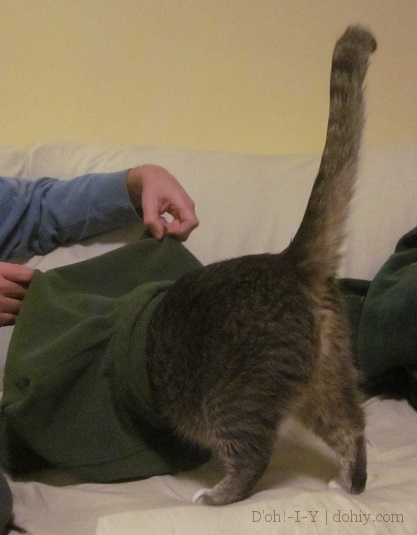 Mayya can get through a hoop that size, no problem. But if you upholster said loop, it raises the friction coefficient. The otherwise simple “cat-in-tunnel” maneuver becomes an undesirable “cat-stuck-in-a-bag” situation. Well, undesirable for Mayya…highly funny to the Kev and me. 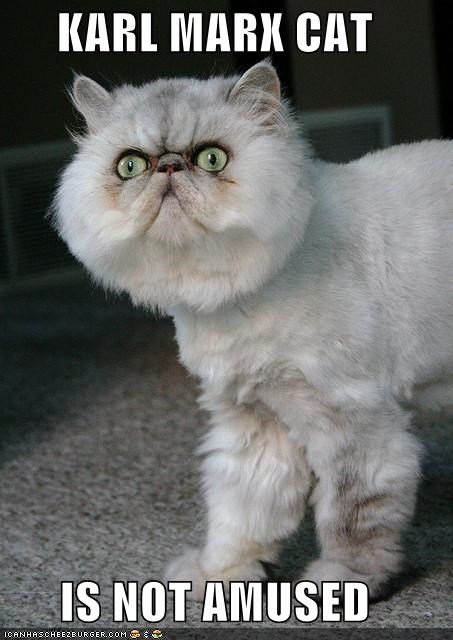 After cutting my brilliant coupler/cat bed door out, I was relieved to find that Mayya was still interested in the bed (with the addition of some more treats), and further that she could get through the opening once the hoop was removed. 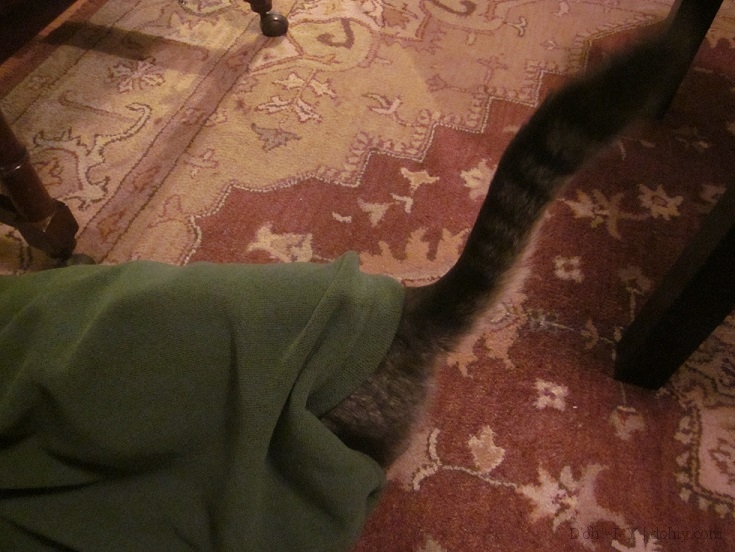 So that’s something, but it’s not much better than tucking her in — she’s still not going to be able to get in there under her own power.

“It’s too bad you have no interest in spoiling these cats,” the Kev commented.

But I wasn’t done yet! 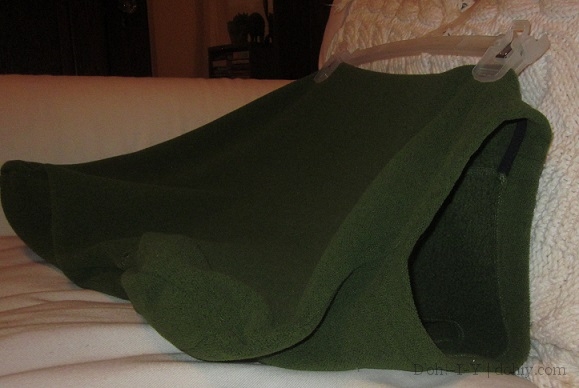 See! The skirt hanger holds it open AND hooks to the back of the sofa! There’s still plenty of fabric to drape. She’s gonna love it!

I tried to get her to test it, but at the moment, she’s firmly ensconced under the blanket and between Kev’s legs while he reads. 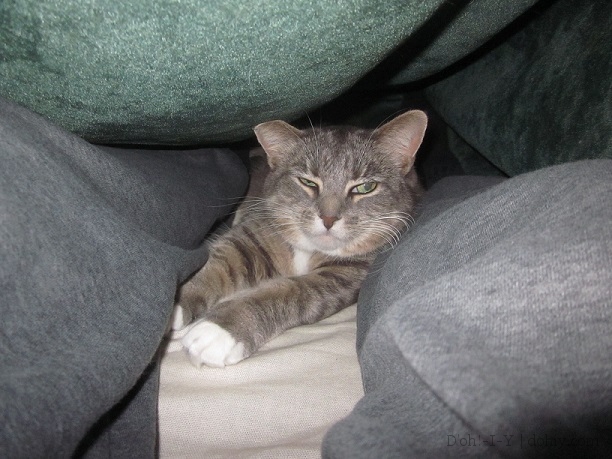 Get lost, woman. And take your flash camera with you.

But it could work, right??

I should probably get out more.

UPDATE: Look what happened under someone’s own power an hour later! 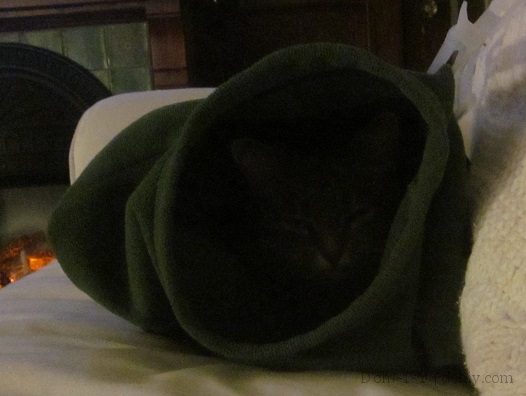 I still need to get out more, but at least I know I can successfully swaddle a cat.

BUT ON A MORE PRACTICAL NOTE: If your cat also likes to be in contact with the blanket, I’m convinced that the loop idea would work (and be more convenient than holding the opening up with a hanger), but the loop needs to be big enough for the cat to get through easily. I’m going to pick up a large embroidery hoop this week and I will report back on the results. UPDATE: click here for the updated version that actually works.

This entry was posted in D'oh!, Decor and tagged cat bed, DIY cat bed, how to make a cat bed. Bookmark the permalink.