It’s time to get some closure … extreme closure.

If you live in an old house, there’s a good chance that you have encountered a droopy door. In our case, the hall closet door was drooping and wouldn’t latch. It kept swinging open and blocking the hallway. The solution was a wedge, but that made using the closet difficult. 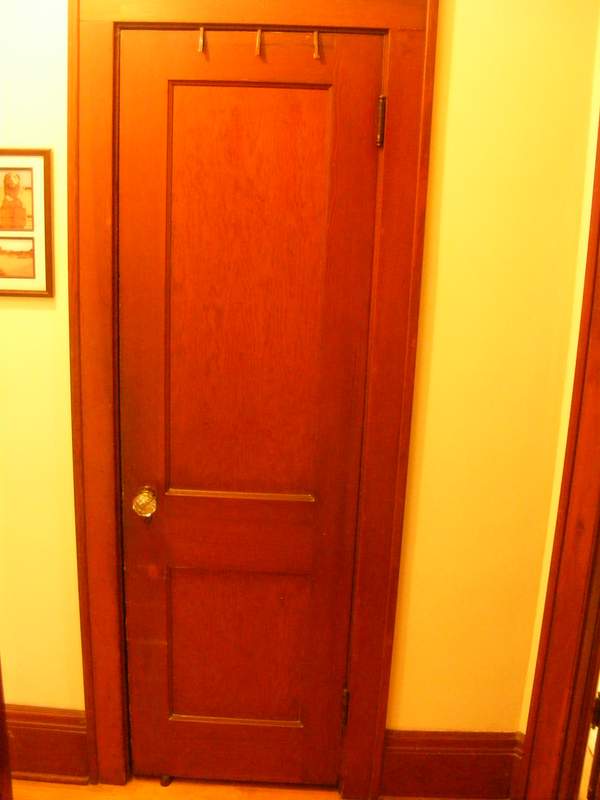 The reason the door doesn’t stay closed is because the latch is too low to go into the hole in the strike plate. 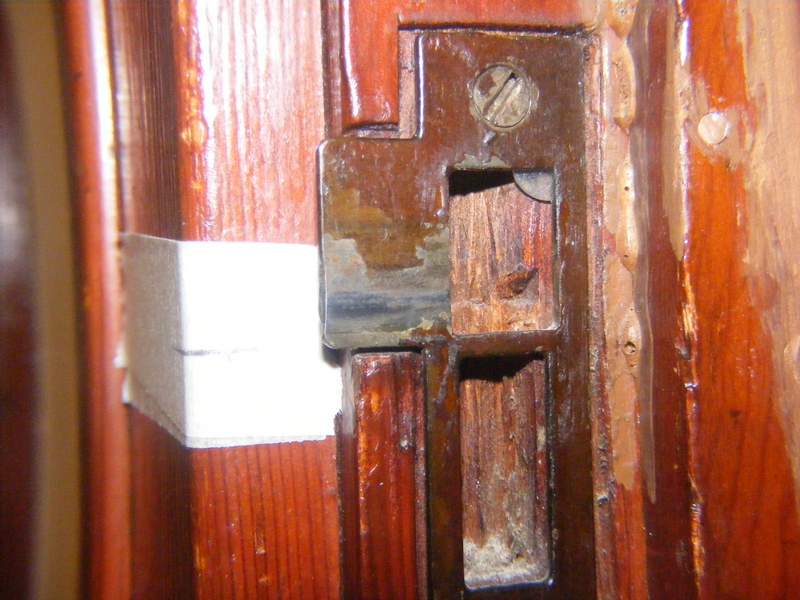 This is the strike plate for the closet door. You can see where the latch has worn off the finish at the bottom of the hole.

To show the problem, I marked the position of the bottom of the strike plate hole on a piece of masking tape. 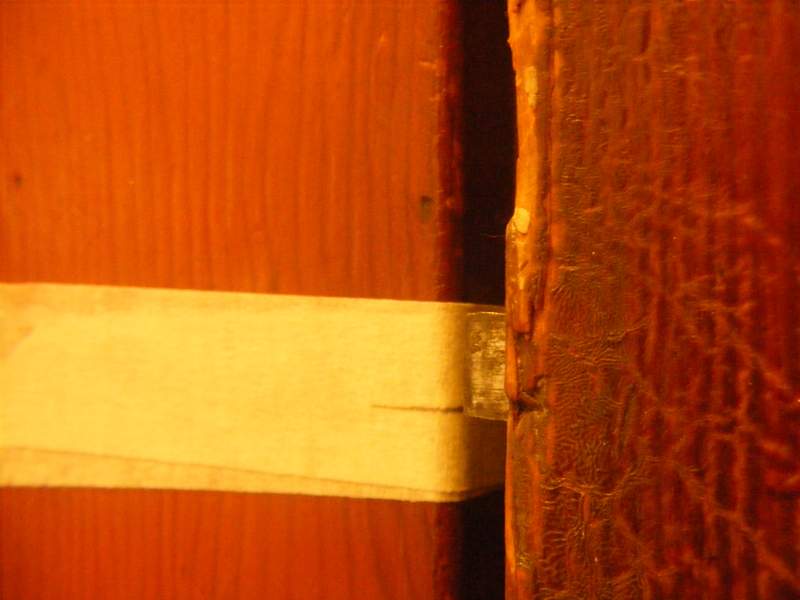 The latch and the strike plate don’t line up.

You can see that the bottom of the latch is below the level of the hole in the strike plate. The door can’t latch is because the lock side is too low. The hardware has become misaligned due to door drooping.

It is natural to suppose, as I did, that the drooping is due to the weight of the door pulling on the top hinge. However, when I looked at the hinge side gap between the door and the frame, I found a larger gap at the bottom hinge than the top. 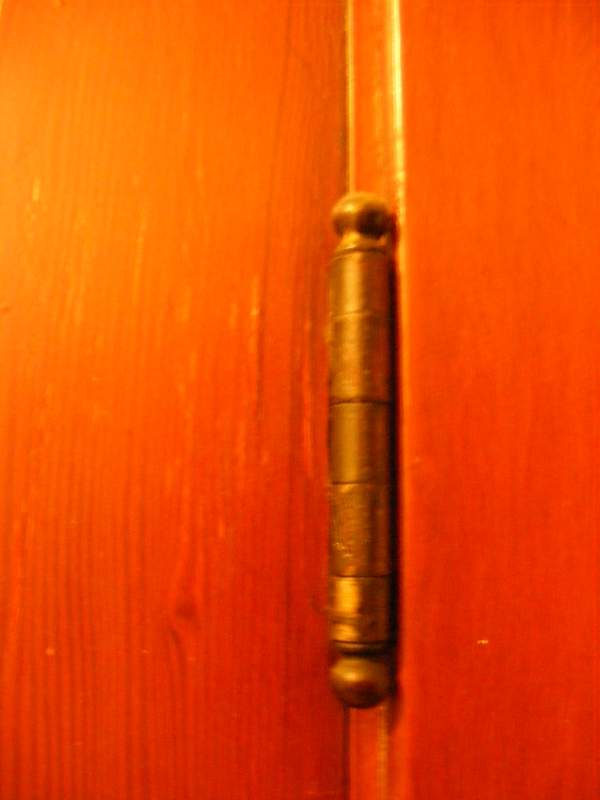 There is no gap between the door and the frame at the top hinge. 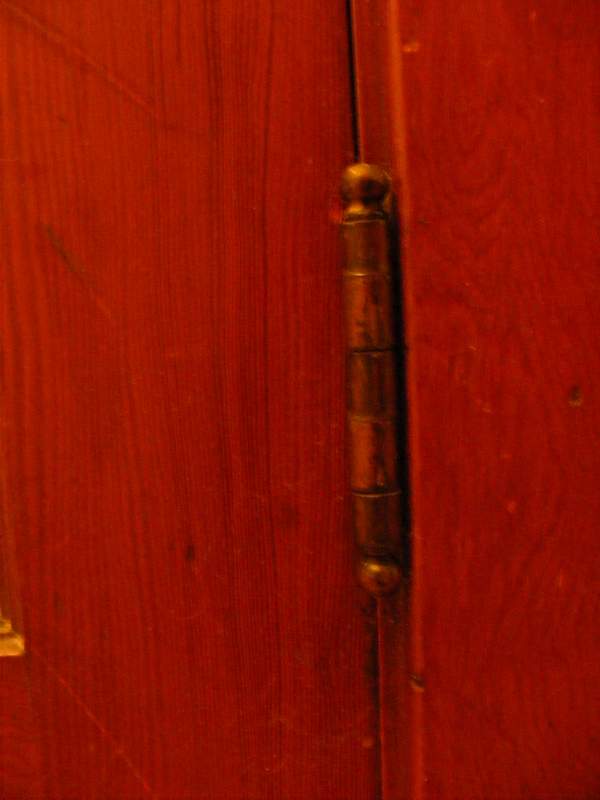 There is a very small gap between the door and the frame at the bottom hinge.

Other measurements showed that it was the door itself that was drooping. For instance, the gap between the door and frame at the top on the lock side was smaller than the gap at the bottom. 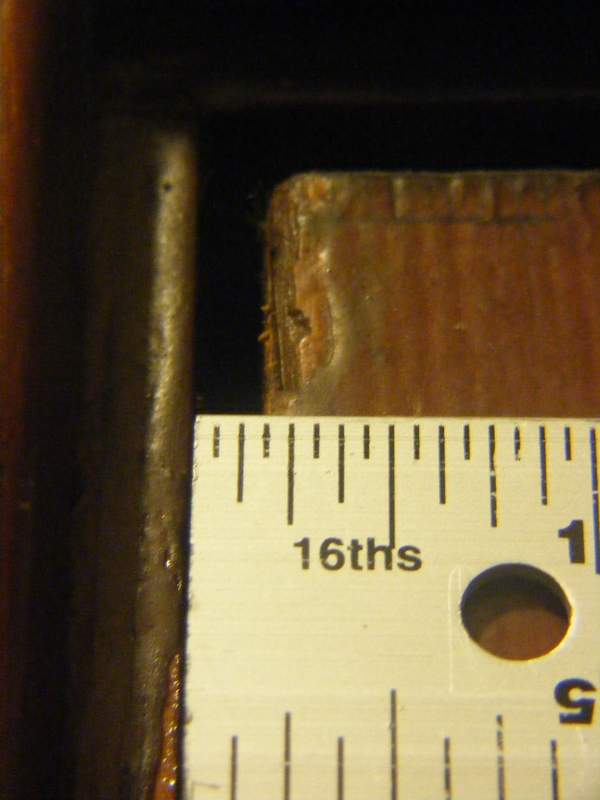 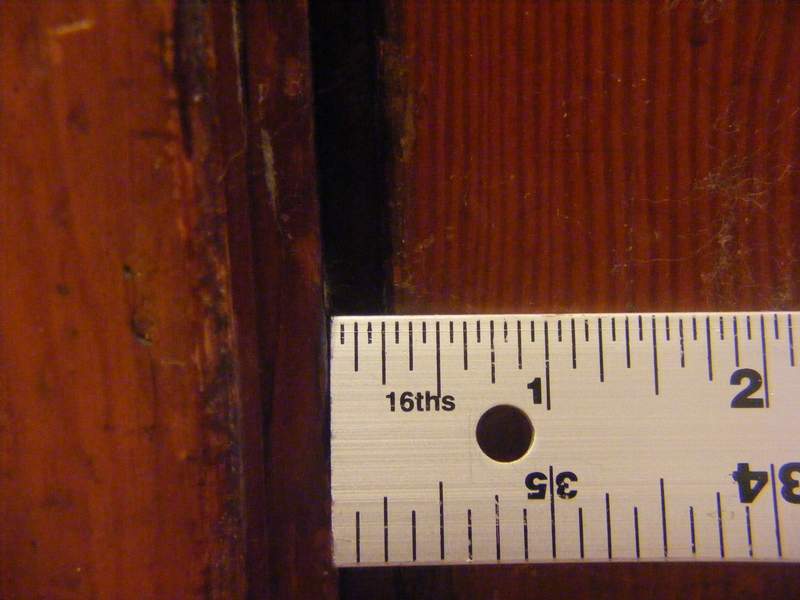 Also, the gap at the top of the door is larger at the lock side than the hinge side. 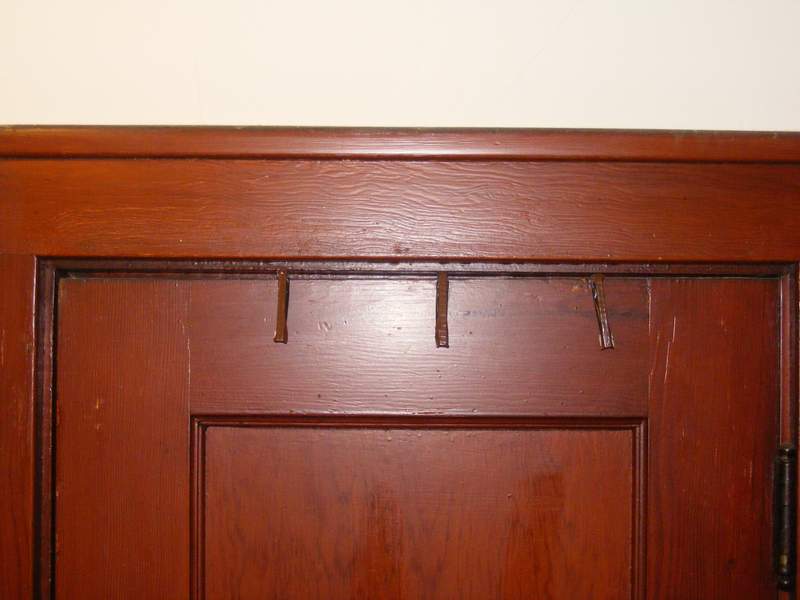 There is a wider gap at the top of the door on the lock (left) side, as compared to that at the hinge side. 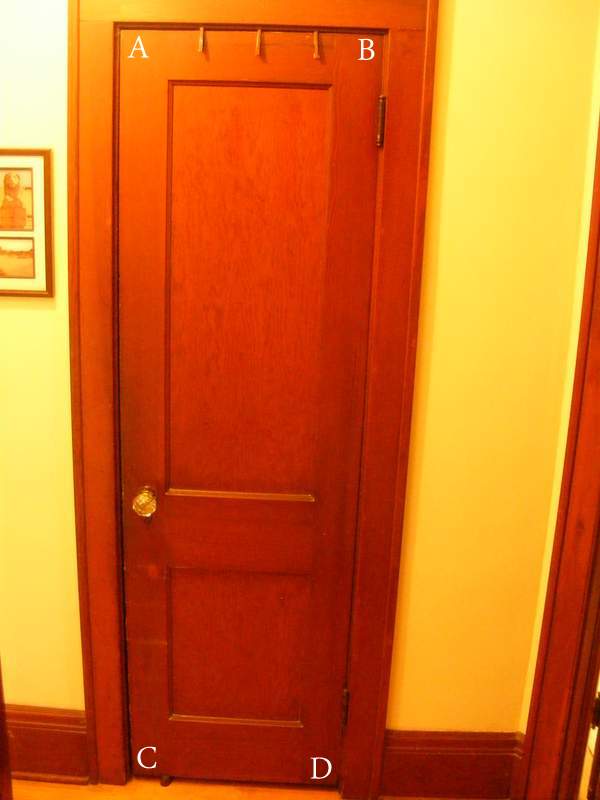 The diagonal B-C is longer than diagonal A-D

The distance A-D is 82½”, whereas B-C is 82⅞”. That’s only a small difference, but enough to cause the misalignment, and to show that the hinges weren’t the problem.

As you can see, this is a panel door. It is made up of a number of pieces of wood joined together. Over the last ninety years, the weight of the door pulling on the joints has caused movement at each joint.

So, things droop over time. Not really news, I know.

But getting back to the task at hand: How does this new-found knowledge help us to make the door close properly? It doesn’t!

Forget about the out-of-square door. That’s just part of your house’s character (and it would probably be really difficult to square up all those panels). There is a quick and easy fix to this problem: pack off the bottom hinge. 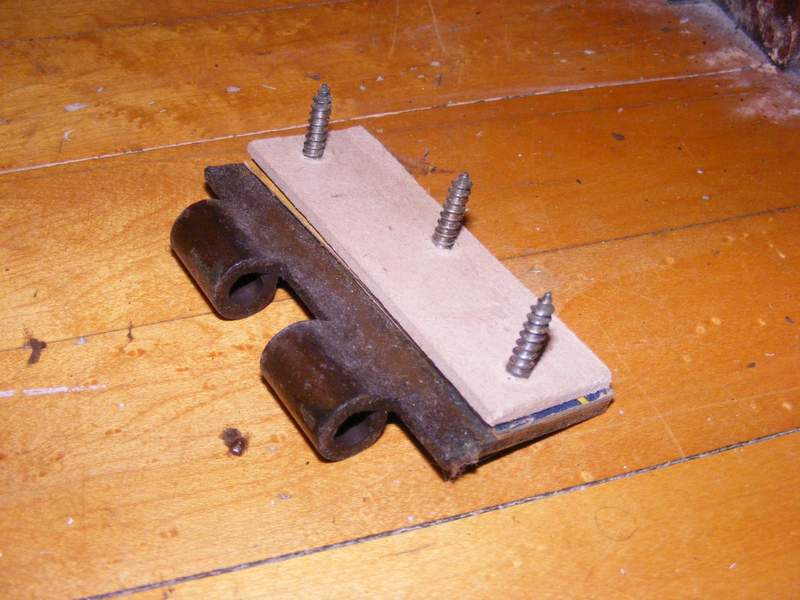 Pack off the bottom hinge with paper, cardboard or wood.

The amount of packing to add is the difference between the bottom and top gaps on the lock side. In this case, 5/16″ minus 3/16″ = 1/8″. Make holes in your packing material for the screws, and replace the hinges and door. 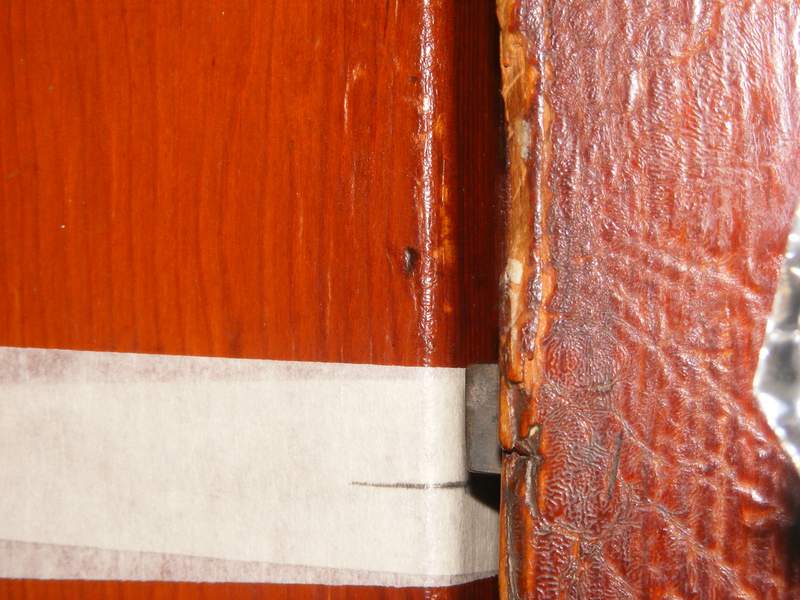 The latch is now above the bottom of the strike plate hole.

Now the latch has been lifted up enough to clear the bottom of the strike plate hole and the door latches again. The hinges weren’t the problem, but they were the solution. 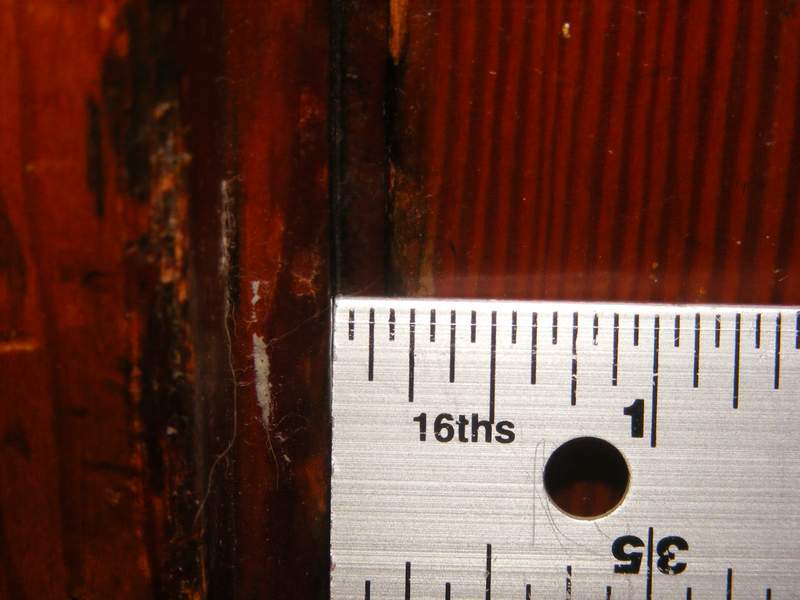 So, that was easy. I wonder why I didn’t do it months ago?