We have a pie cherry tree. “Pie cherry” is a euphemism for “sour thing that needs lots of sugar to be edible” but I still love them right off the tree. When the cherries are at their peak, they are so perfect and glossy and red that they almost look fake. 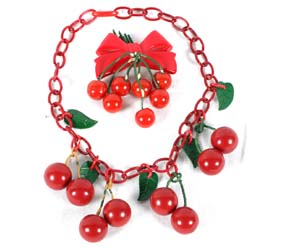 I was supposed to prune it over the winter, but between one thing and another, I didn’t. Then it bloomed, and I said, “Look at all the cherries we’ll have this year! I’ll prune it after picking.” Well, it’s picking time. It doesn’t look like too much of a challenge from here. 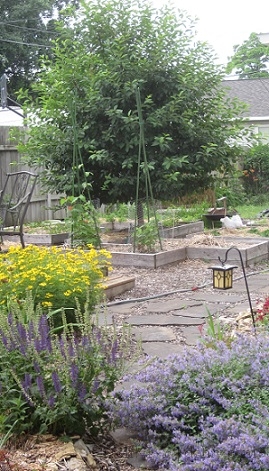 Down the non-proverbial garden path.

But once you duck under the canopy, it’s a different story. 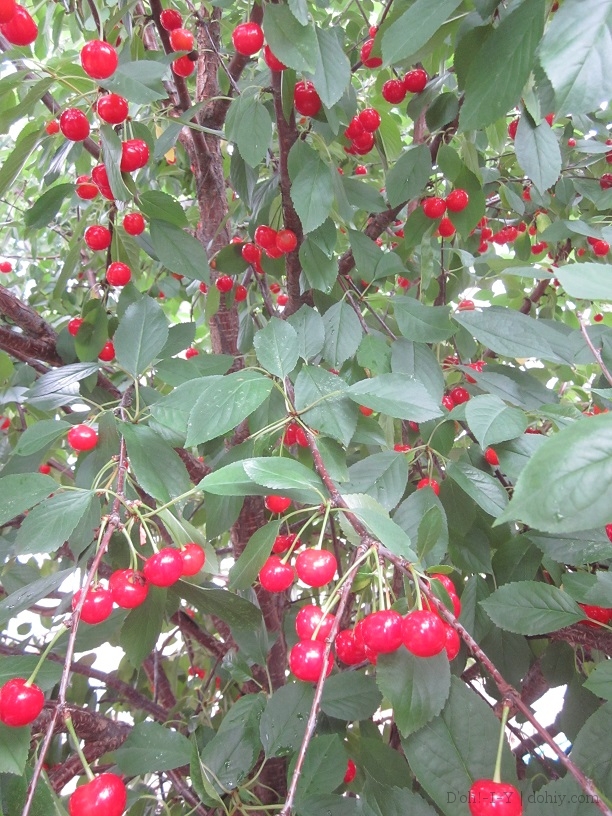 Sunday morning, I decided I’d pick everything that was ready. You’ve heard of the low-hanging fruit? Lesser known are the medium-hanging, high-hanging and just-out-of-reach fruits. I picked. And picked. And picked. I experienced the full Five Stages of Cherry Picking:

Stage Five was my clue to just stop already. At that point, I had 13.4 lbs/6.1 kilos of cherries. The punch line? The Kev doesn’t like cherries. And I can’t make enough pies to use these up. There’s no dang way! And that’s how I ended up spending Sunday afternoon making sour cherry jam.

I used a Serious Eats recipe, Perfect Sour Cherry Jam. It says it’s PERFECT, so it must be good, right? It’s right there in the name! But I mainly selected the recipe because it wasn’t drowning in sugar as much as the others I found — I like how the cherries taste already.

You know I’m cheap, so you also know I’m not going to buy a cherry pitter. My technique reaches the same result. Take a wooden chopstick (from a takeaway pack) in one hand and a cherry in the other. Invert the cherry and find the dimple. This is not straight through the cherry usually — otherwise, they wouldn’t hang at such jaunty angles. Anyway, stick the chopstick right through the dimple and push the pit out through the top, preferably into a receptable of some sort. For the record, 13.4 pounds of cherries takes 2.3 hours to pit, which is a rate of 5.8 pounds/hour. Also, you may get a blister from the chopstick (or the pitter, for that matter).

Next, crunch ’em in the food processor and cook ’em. They do NOT look promising at this point. 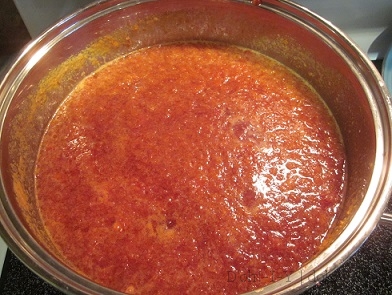 As you’ll see in the recipe, this all goes together pretty quickly, but it does make a helluva mess. I’d like to have marble countertops, but whenever I do any sort of canning or pickling, I suspect it’s a bad idea (regardless of my attempts to reassure myself). I thought the kitchen was pretty much cleaned up last night, but I found a missed sticky spot this morning. It doesn’t bother the laminate! Maybe zinc counters instead…?

Anyhoo! I filled 12 of those cute cup-sized jars and six pints, plus a mug full of what was left stuck in the fridge for immediate use. Despite the scary appearance when cooking, it looks just incredible in the jar. 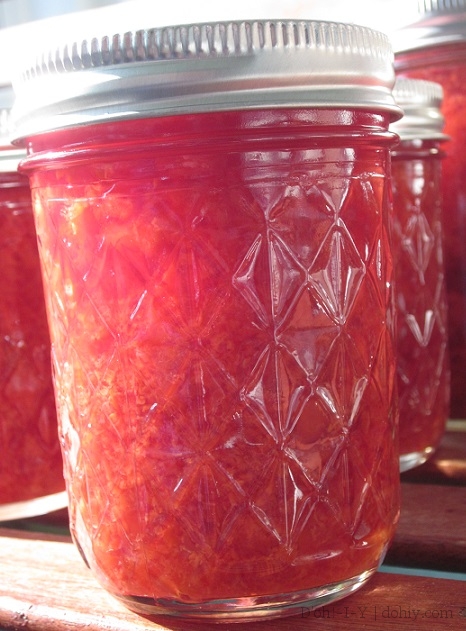 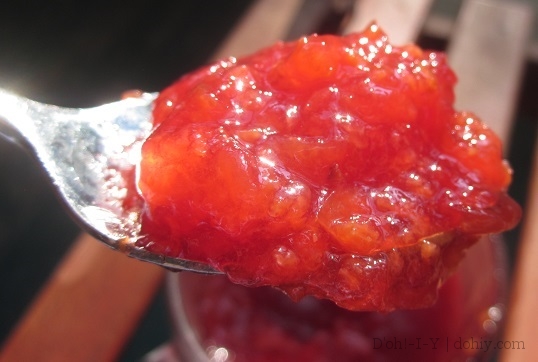 It’s a ton of work, but worth it once a season! We now have jam to feed a multitude. (Spoiler alert: if you are on my holiday gift list, you’re getting sour cherry jam this year.)

What’s happening in all y’all’s kitchens?