Before and After: Princess Vanity Grows Up

Where do I keep my princessness?

Back when I was facing that hard avenue of academic rigor commonly known as Fifth Grade, my parents gave me a desk. It matched my white-and-gold French provincial bedroom set, and I placed this new addition at a sophisticated angle beneath a window. Between the desk and a floral pen stand, I felt like the classiest lady scholar the world had ever known! (Thanks again, Mom and Dad!) 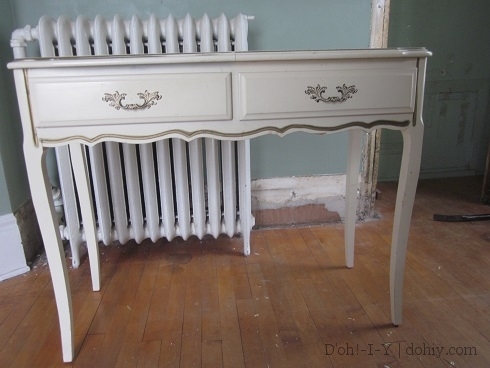 The desk was, in truth, a vanity table, with a hinged top concealing a mirror. I used it primarily as a desk for many years, and subjected it to some hard use. As my studies progressed, I needed larger workspaces, so my original desk/vanity was consigned to our loft for many years. When we started the bedroom renovation, I took a closer look at it and decided to include it in the plan.

At this great remove from fifth grade, I felt the scalloped front was a little too ornate, so the first order of business was to deal with that issue. Because the piece in place was the perfect size (obviously), I used the Sawzall to cut through the joints so I could remove it. Then I cut the scalloped side off square on the table saw. 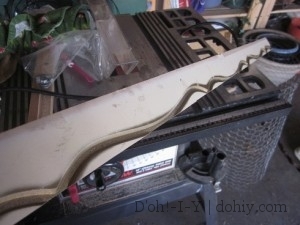 The back side was just flat wood, so I reinstalled it backwards using metal braces. I also reinforced some other loose joints. 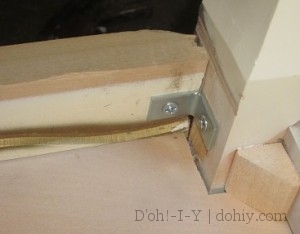 Retrospectively, I maybe could have left the apron in place, used the jigsaw to cut the front down, and applied wood filler to eliminate the routed pattern, but I don’t think I could have gotten the edge so straight that way. (I previously filled a routed pattern on a similar dresser, so that part would have worked, though.)

Here it is with the new front: 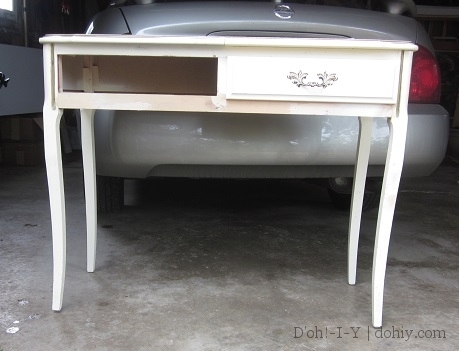 I liked this look better, but I wanted to carry the curve of the legs through to the front, instead of having the hard angle before the new front. I used cardboard to draw a template. 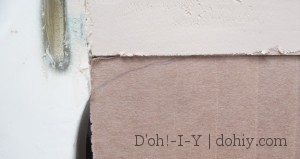 Then I used the jigsaw to cut out a piece to patch in. 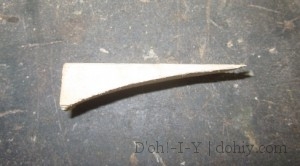 Cut with the grain as much as possible.

After touching this up with wood filler and sanding, the curve revealed itself. 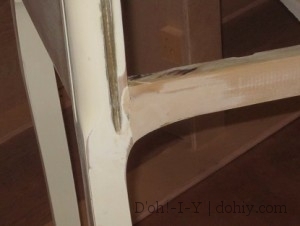 I fussed over this detail quite a bit (to the point that I was pretty annoyed with myself for fussing over it so much!), but I was really pleased with the eventual result. 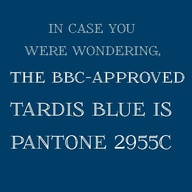 I cleaned, sanded and primed the whole thing, then it was paint time. I almost lost my mind looking at deep blue paint chips. I had a colour in my head that did not exist in paint! I did a ridiculous mental detour through the idea of making the thing Tardis blue. Because the Tardis is an attractive color! And I’m a bit of a geek! But I couldn’t find a good, locally available commercial equivalent for Tardis blue, and I am not enough of a geek to take in a model Tardis for color-matching purposes.

Paint choice was also complicated by the fact that I didn’t have curtain fabric selected by that point. I had to step back and do things in a reasonable order. Once I had my exuberant drapery fabric purchased, picking a paint color was much easier — I just picked up a blue detail from the fabric. The winner was Benjamin Moore’s Champion Cobalt, BM 2061-20. 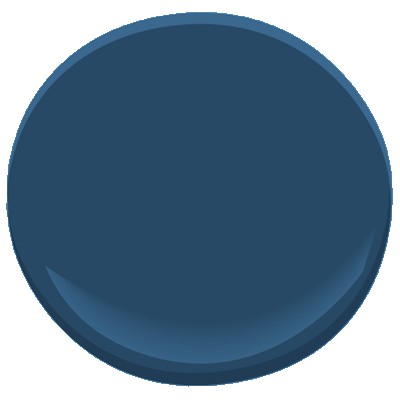 This swatch doesn’t do it justice, but there are lots of gorgeous pictures of Champion Cobalt out there.

I sealed with a satin-finish poly and replaced the handles with vintage glass pulls from Art and Architecture in Minneapolis. If I were craftier, I might have added patterns or texture, but I wanted to keep it simple and let the color be Miss Thang here. 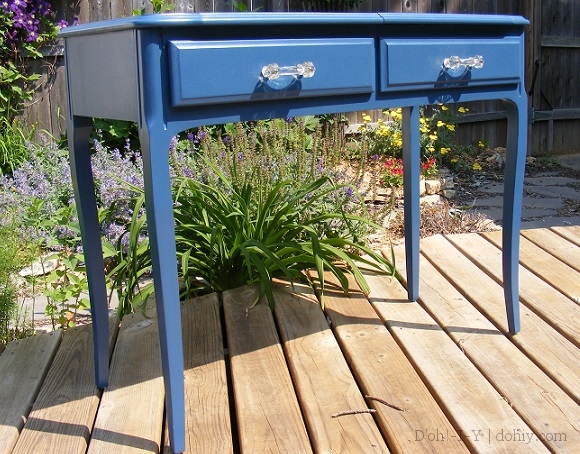 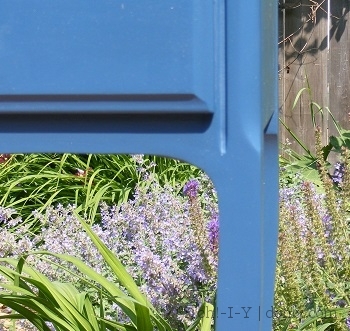 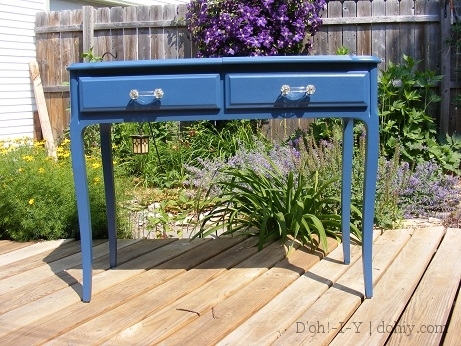 I really love how it came out (and that’s good, because it took more work than I was anticipating), and I’m looking forward to seeing it in the finished room. I’m putting it in front of one of the windows, just like when I was eleven! Some things don’t change.

5 Responses to Before and After: Princess Vanity Grows Up