Knobs: Their Care and Placement

The closet doors are up! WOO! And now they need knobs. Which I already bought: 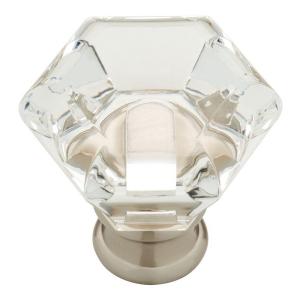 We have glass door knobs throughout the house, and these knobs continue that thing on the closet. But where should they be placed on the door?

Well, color me surprised, but there are quite a few people online with strongly held opinions about knob placement. And, really, they are all fine options! What a weird thing to get het up about. There’s probably a conspiracy theory in there somewhere about the internet being a huge distraction, causing us to bicker about meaningless trivia so we don’t notice our new zombie overlords … until it’s Too Late. (That one’s for you, Dad!)

Anyhoo, the two main camps want knobs either near the hinge or placed symmetrically near the center. Putting the knobs near the hinge works better with the door function (and apparently, some bifold door manufacturers recommend it) because you are pulling with the direction the door will fold anyway.

I like this one because they added escutcheons below the knobs to make them look more completely door-like.

I love the word “escutcheon.” Here’s another example, without escutcheons:

Here’s one using a pull instead of a knob, which looks great in this room:

But some people don’t like the asymmetry of the hinge placement, and plump for a centered option on the middle panels.

The hinge-area supporters say this centered placement makes the doors harder to open, but bifolds aren’t exactly medieval oak portals. This placement is pretty much exactly how the knobs were on the closets I grew up with, and I don’t recall any difficulties. But if you have wrist problems, it is pointed out online, this might not be as comfortable as the other option. The symmetry is nice, though:

If only there were a way to harmonize symmetry and good wrist health!

Now we’re talking! This is the option we’re going for, using four knobs to achieve a “paired door” symmetrical look while still taking advantage of the near-hinge location.

Definitely one of the stranger things I’ve seen debated on the internet! If you are putting in bifold doors, I hope this summary of the major knob position arguments helps you.

This entry was posted in Construction, Decor, Windows & Doors and tagged knobs for bifold closet door. Bookmark the permalink.

4 Responses to Knobs: Their Care and Placement