Postcards to the Future

Lisa: Lincoln didn’t hide any gold in the White House.
Homer: Then what is his ghost protecting?

When I was a kid, a friend’s parents added an extension to their house. Inside an open wall, her dad painted

in huge letters between the studs. I was both charmed and slightly shocked — the contractor would see it the next day! Oh-la-la! Proclaiming one’s feelings was a much bigger deal to me back when I was nursing schoolgirl crushes. (I got over that — nowadays, folks glaze over when I speak repeatedly and at length of the Kev.)

This house holds some of its own affectionate graffiti: 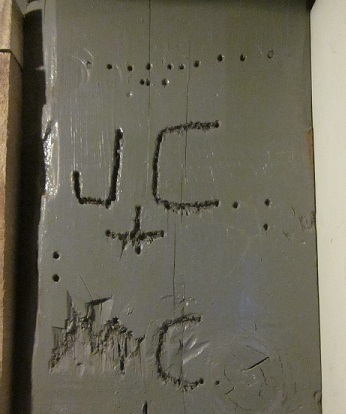 I love these little remnants from former owners who were also happy here. 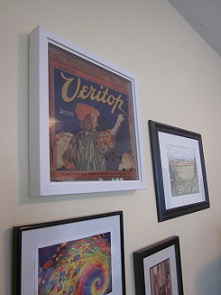 We’ve also been lucky enough to find two informal time capsules. One was a newspaper dated 6 July 1952 inside an orange crate under the front porch. There’s no getting under the front porch unless the concrete steps are out of the way, so we figure that was when the prior front steps were put in. The other was a 1946 newspaper inside a coffee can inside the old concrete stoop, which we found when demolishing the old steps.

We’ve had so much fun finding the time capsules and other random little things around this place that we are carrying on the tradition. We’ve never done any substantial renovation without leaving something behind for someone to maybe find later. Here’s our bedroom remodel capsule: 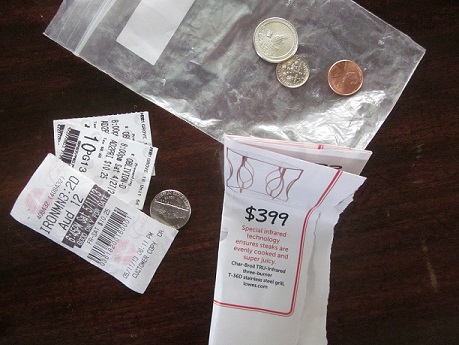 It’s not much — some ticket stubs and recent coins to date the find, and a page from the June HGTV magazine showing high/low prices for home decor items. I popped these items in the bag and tucked it into a little space between beams before we installed the trim.

The only constant is that we always throw in something with a date. Anything else is random, and depends on the space available. Once, we threw in the cleared electrical permit. Sometimes I pick something odd, like an action figure or a random cartoon. The kitchen wall contains House on the Rock tokens. It’s fun to leave a weird little gift for future owners, even if they may not ever find them or care. I’d like to think this house attracts the kind of folks who would like to find our Easter eggs — in any event, I’ll never know either way!

Never one to do things by halves, my dad has a locked briefcase containing a time capsule he created at the Millenium to be opened a century later. It’s a real time capsule, with all sorts of interesting items and a letter from my dad talking about the current time and his predictions for the future. It’s an impressive thing, and someone will really enjoy opening it. They will learn so much. Comparatively, our little offerings are just postcards to the future, but we sure do enjoy sending them.

This entry was posted in Construction, Romance and tagged time capsules. Bookmark the permalink.