Rod: I don’t like this clown!
Bart: I wouldn’t take it down if I were you. It’s a load-bearing poster.

In case you were in any doubt, this is not an interior design and decor blog! But home improvement includes decor, so we sometimes indulge.

We had the start of a gallery wall above our fireplace cabinetry. It was intended to help blend the television, and incorporated only items that were significant to us. 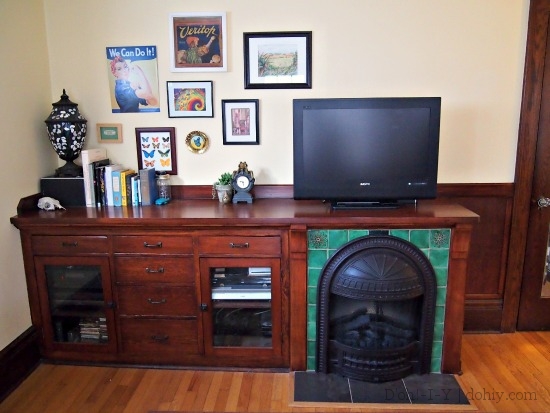 I planned these original pieces by cutting cardboard to the size of each item and taping them up until I was happy with the arrangement. When we had more pieces to add, I used the same technique. Through many iterations ranging over several months, some of which I photographed. 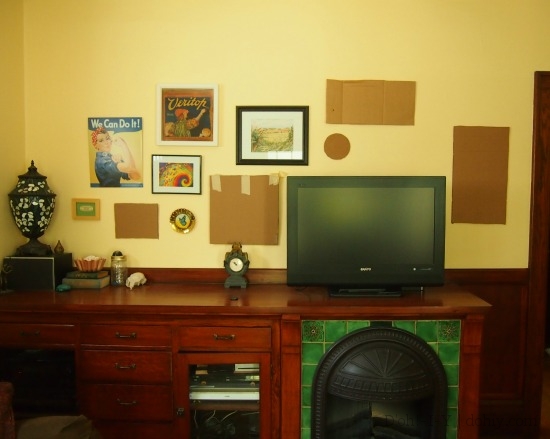 Version 1. I had an idea for something to the right of the round piece, but decided against it. Check out how much this paint color changes with the light! 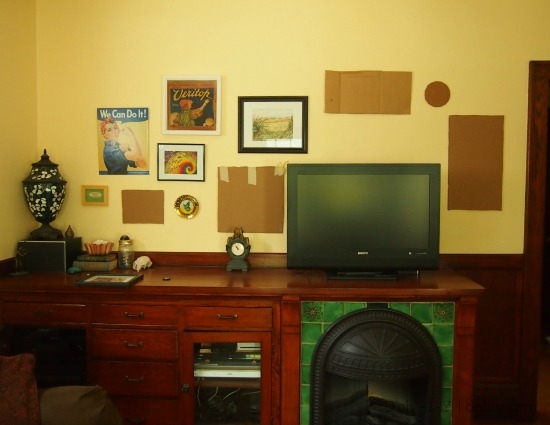 Iteration 2. Moved the round piece, not sure about above, or to the left of, the television. 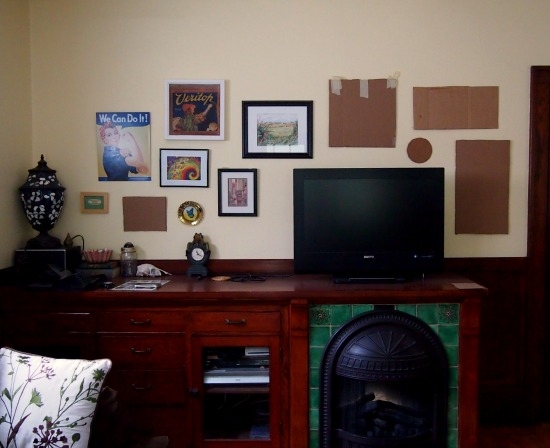 Iteration 3. Moved the piece to the left of the television above the television and bumped the horizontal piece right. The round piece looks ok from here, but not from the sofa (and, let’s face it, that’s how it’s generally going to be seen).

Mocking up the wall with cardboard helps me see how everything will flow once it’s up. I generally need to see something to really understand it, and this little game allows me to play until I figure it out. The only thing it’s lacking is color, but nothing we had on deck was going to be jarring next to anything else, so we weren’t too worried about that aspect. We’re not terribly sentimental, but the important thing to us was to add items that were personally significant, not just color-coordinated stuff to fill up space.

Another advantage to a cardboard template is that it simplifies hanging. Once the pieces are where you want them, measure how far down from the top of the piece the wire or other hanger will be with gravity. Then, mark on the corresponding cardboard where the hanger is (generally the middle), and then measure down to the hanging point. You can either mark that with a pencil if you are using a removable hook, or nail or drill through your mark right into the wall. 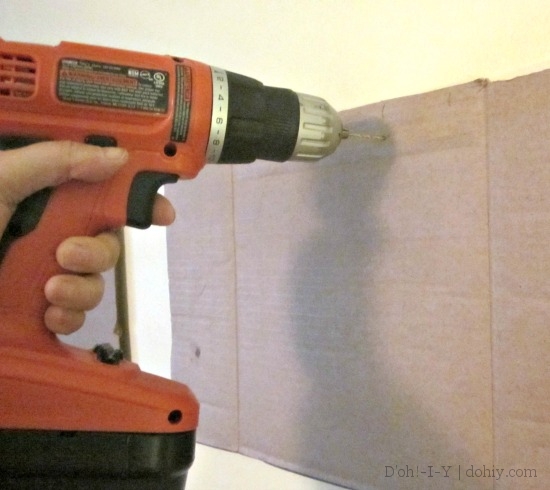 If you are nailing through plaster, drilling a small pilot hole is still a good idea. Plaster can crack and chip when nailed, and a pilot hole reduces the likelihood of that happening. It also helps to add a masking tape “X” over the pilot hole or mark. 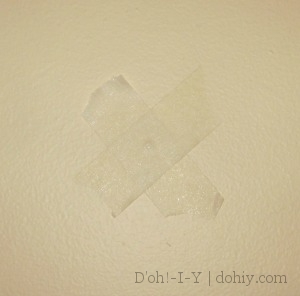 Still, that’s no guarantee it’s going to go perfectly. I am a big (and wholly unsponsored) fan of 3M Command Strips for hanging most items — in fact, I used them on everything on the fireplace wall up to this point. The new items include a heavier, fragile piece, and I wanted to really secure it and the picture hanging above it, just in case.

When working on the picture above, I ran into a stud when drilling a pilot hole. This sounds like good news, but the studs in this house have been curing for over 90 years, and they are ridiculously hard. I drilled a larger pilot hole, then tried to tap in a long nail. The hammer just bounced back like I’d hit an anvil. So I drilled a larger pilot hole attempting to make way for a fastener, thereby creating close to a 1/4″ divot in the wall as the plaster crumbled around the drilling. Then I made a further bad call, deciding to use a plastic wall anchor to fill up the hole. Naturally, the anchor didn’t want to go into the stud either and broke off. 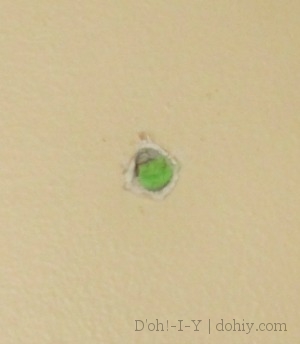 Winter is long. I’ll fix it then.

So attractive. I had to drill a pilot hole into the plastic wall anchor so the Kev (being taller and thus able to achieve a better angle than short-pants here) could put a screw into the plastic and unscrew the whole mess. Afterwards, I put a long, narrow screw into the stud, but the hole in the plaster is still there underneath the picture. The lesson: don’t do a lot of investigatory drilling into super-hard studs through plaster unless you just want to mess up the wall and annoy yourself. 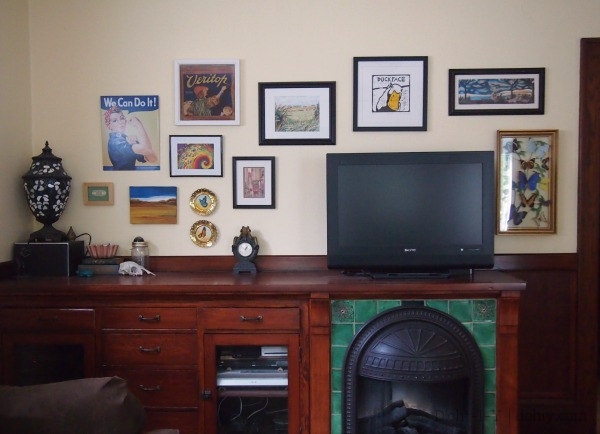 For this quasi-final version, I moved the round piece underneath its twin (both painted by Aunt Sara), next to the abstract landscape (painted by Momma). The numbered “Duckface” print (gift from Ben and Lois) moved over the TV from its earlier trial space next to it. The Portland Cello Project poster (a recent framing project) moved to the right, and we lowered and centered the antique butterfly specimens (a gift from me to the Kev) next to the door where they can be seen up close.

Here’s how it looks from one of the couches: 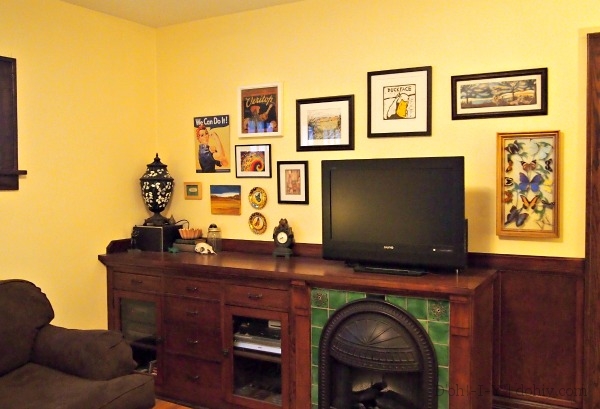 I might spread out the original core just slightly, but that’s super-easy because they are all on Command Strips. Either way, it’s all the pieces we wanted and we like it.

Gallery walls aren’t to everyone’s taste, and our selections certainly won’t be, but the template technique is useful for anything you want to put on your wall. Anything flattish, anyway. You’re on your own with that moose head.

One Response to Gallery Proof