Cabinet of Dreams, Part VII: If You Build It, He Will Put the TV on It

At this point in the fireplace/cabinetry project, we’d been living for over three months in the other corner of the sitting room with the television armoire in the arch leading to the dining room. We were really tired of the temporary arrangement and were more than ready to put the room back together. There were just a few things to finish up.

The original cabinet doors were long gone, having been replaced by solid partial-overlay doors when the unit was updated around 1950. Because we were going to be putting electronics in the cabinet, we needed glass doors for the remote controls to work. 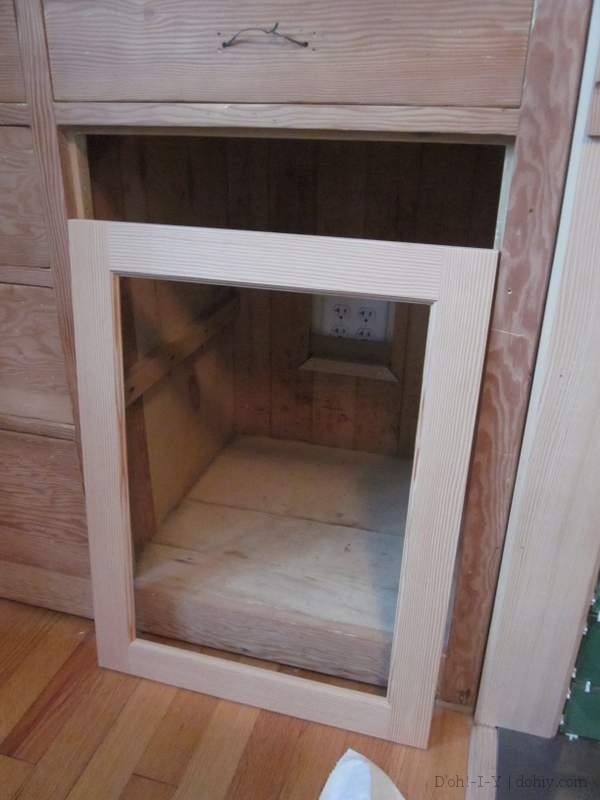 We ordered empty, unfinished glass frame doors from the wood-shop that had made the top for the built-in. These were made from Douglas fir (or “Doug-fir” as the wood-shop guys called it for short) to match the rest of the unit. 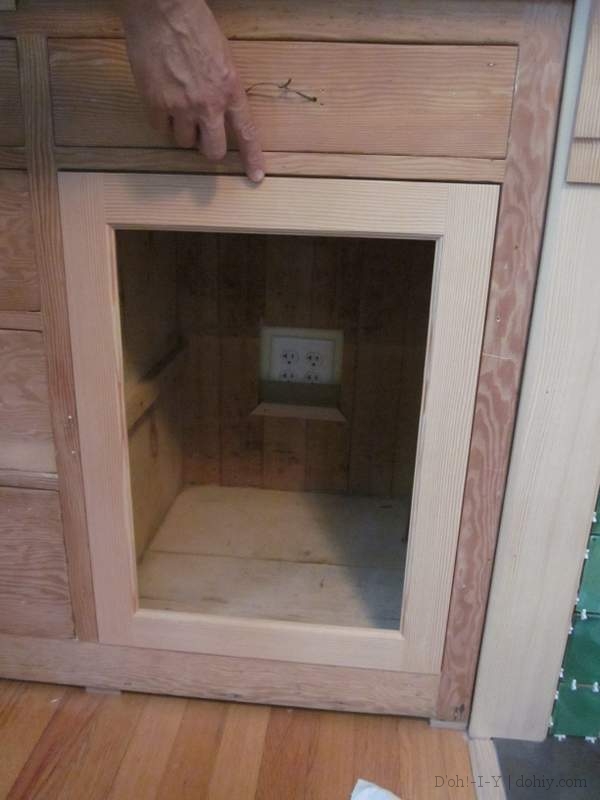 Door in place. We later added shoe moulding to the front to hide those shims.

When ordering doors, first find out how you should measure. At the place we used, we brought in the size of each opening (making sure to measure both dimensions in several different places so we chose the smallest length or width for the opening). They subtracted the necessary gap from there, but some places want the size of the door instead. Either way, make sure to measure each opening individually. The two door spaces varied more than we expected.

Since we were attempting to make a unit that looked original to the house, we looked for period and reproduction pulls and hinges. We picked up the hinges at Menards, but antiqued them using Rockler’s brass darkening solution (a chemical wash that “ages” new brass fittings).

For the drawers, we matched the sash lifts found throughout the house by taking one to an architectural salvage shop and physically checking a stack of them until we had matches. 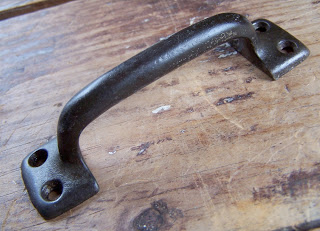 Some of the ones we found were painted or covered in varnish, so Stacey cleaned them in the slow cooker, then used the darkening solution on the handles to restore the patina. She buffed the ends a little because they would not have been touched as often as the middles.

We also needed two cabinet latches. We have a spring-operated turn-latch on an original cabinet in the refrigerator nook and wanted to match that as closely as possible. Salvaged turn-latches are usually missing the catch, so we went to House of Antique Hardware for brass reproductions (we ordered the oil-rubbed bronze finish). The latches are very convincing and good-quality units.

The trickiest part with the hardware was screwing the various parts to the doors and the cabinet. This was another time when using Douglas fir presented its own special problems. It turns out that there is a big difference in hardness between the dark and light bands for this wood. The dark bands are hard and the lighter bands are soft. This little feature means that when you try to drill or screw into fir, the drill bit or screw will try to take the path of least resistance and head off into the nearest light-colored band. Fixing these fasteners and hinges tried my patience to the absolute limit, especially since the reproduction hardware came with really cheap mounting screws. But I managed to stay with it, and it all worked out in the end (albeit with different brass screws, also dipped in the antiquing fluid).

Since the doors are at kicking and toddler-diving height, we put toughened glass (US: tempered glass) in the frames, which we ordered to size from a local dealer. Our original intention was to add some detail to give the illusion of leaded glass (and to distract from the electronics), but that hasn’t happened yet.

To carry on the built-in look, we paneled the rest of the wall from the built-in over to the door. The fir-clad plywood for the paneling came from an old cabinet we bought just to break down to reuse its sides. The trim was from the fir cache we purchased from Craigslist, cut and routed, then attached using a finish nailer. 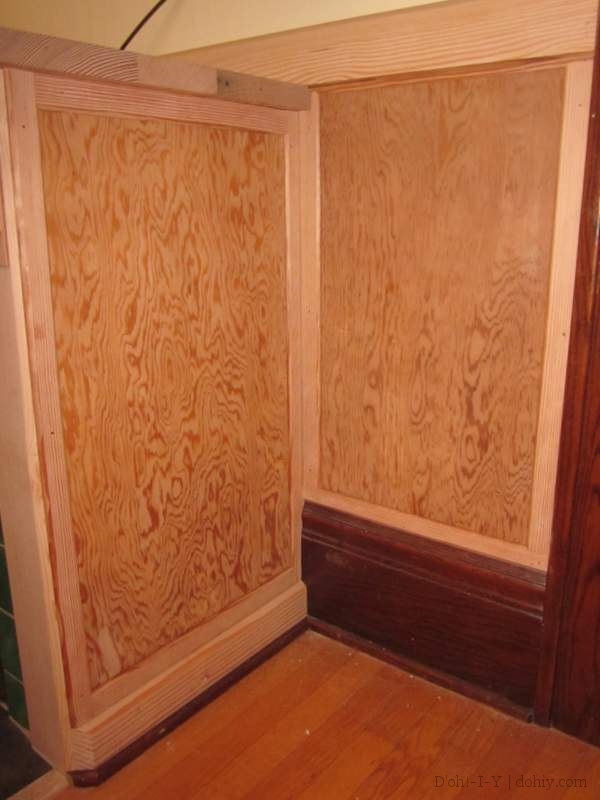 We thought about adding a bench or bookcase to the built-in in this corner, but so far, we like the open spot just as it is.

I also fitted a small section of paneling on the other side of the door to give some continuity and visually connect the wall on both sides of the door. 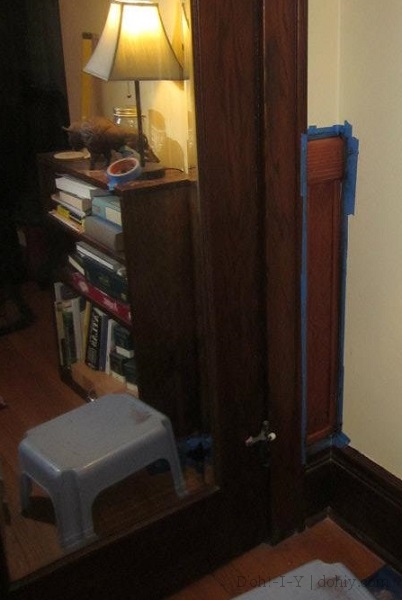 Paneling on the other side of the mirrored door (during staining)

With all the woodwork done, it was time to fill the nail holes and stain the new cabinetry to match the rest of the house. I handed this off to Stacey, who is finicky about stain matching. She used Old Masters gel stain to build up colour to match existing woodwork in the room. She used a gold colour to make the trim around the hearth match the floor. 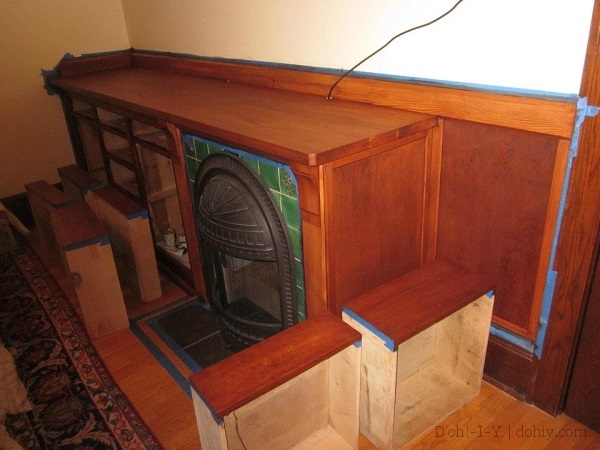 After the first two base coats of cherry stain

The eventual finish was protected by a wipe-on polyurethane that gave the whole thing an older-looking, hand-rubbed effect.

The Before and After

We’ve been really happy with how it all worked out. 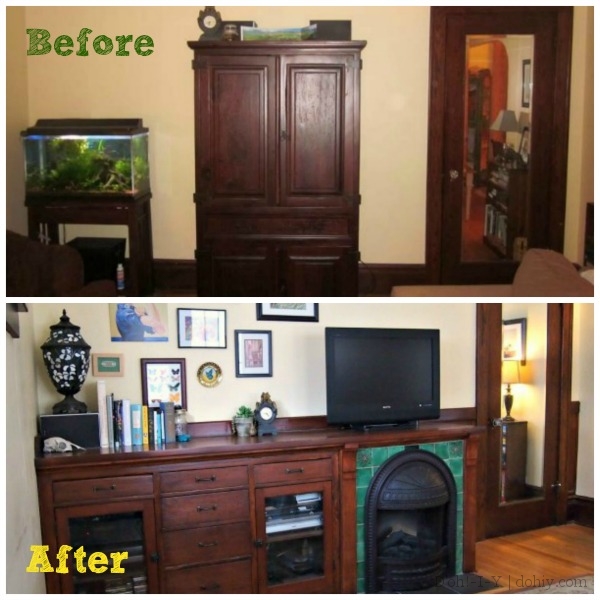 Many people dislike televisions over the fireplace, but the mantel here is fairly low, and we’re building our gallery wall around having the TV there. Plus, we don’t have a dedicated room for the telly–this sitting room/living room is where we sit/live. 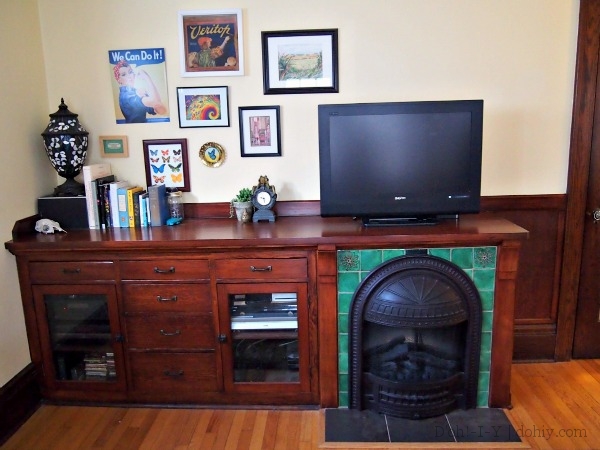 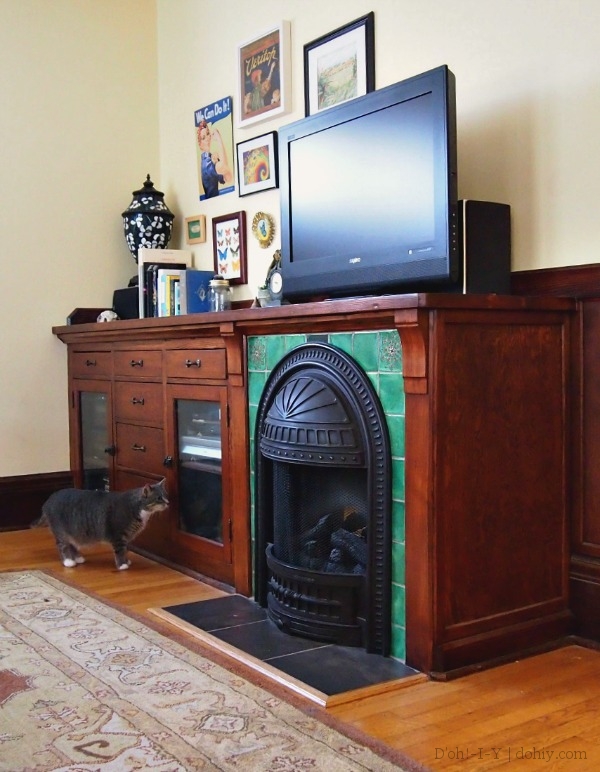 Wondering what the rest of the room looks like? 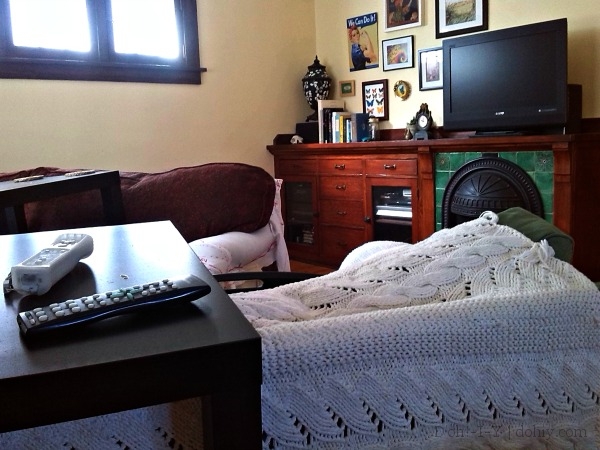 Furniture scrunched to one side to allow picture-taking

If you are new to this series, here are links to all the steps: 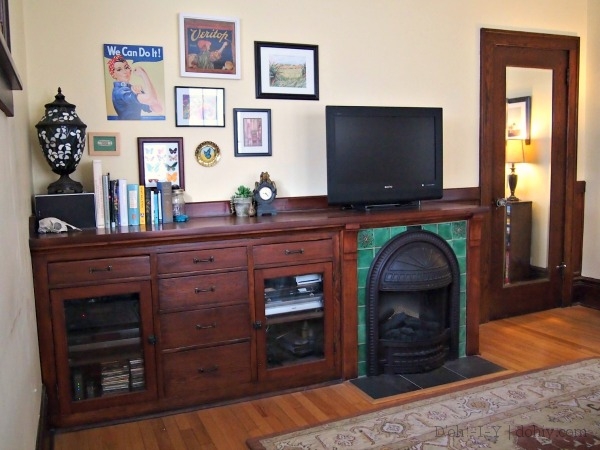 We finally have a house with a fireplace!

2 Responses to Cabinet of Dreams, Part VII: If You Build It, He Will Put the TV on It